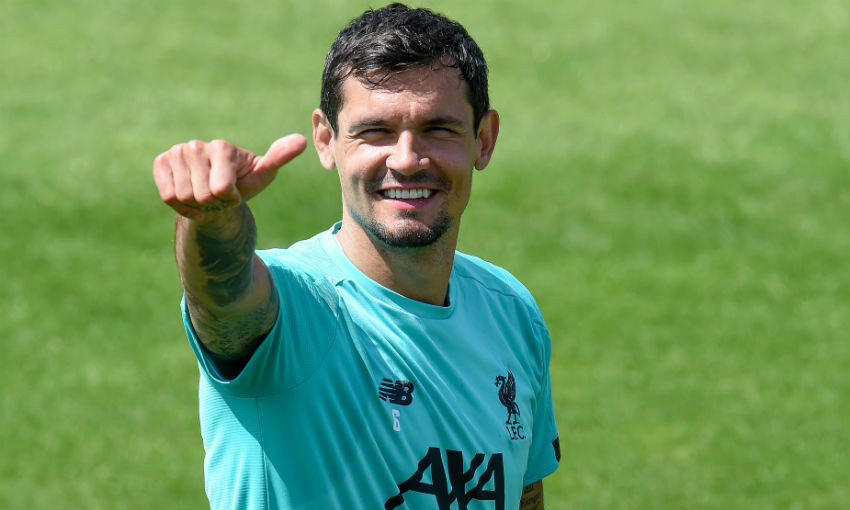 Dejan Lovren believes Liverpool's eagerness to return to action has taken the already-high standards of training to another level.

The Reds were back at Anfield for the first time since March on Monday for 11v11 match scenarios, with Sadio Mane and Naby Keita scoring goals.

Lovren feels the inter-squad contests and resumption of contact sessions have been important steps ahead of the Premier League's provisional restart on June 17.

The centre-half told Liverpoolfc.com: "It's great. When we came back all together, it was like, 'Wow, how many players we have.'

"When you look at all the faces, it's like, 'Here is quality.'

"The other day we played and it was great to see some players in good shape after such a long time not playing.

"Then you come back and you're like, 'My God, we need to really work even harder for a spot.'

"You just realise you really miss football a lot. This is why I started to tackle my son here around the garden! We enjoy all the sessions.

"We can say whatever we want, but it's not the same. You can work as hard as you want at home, it's not the same when you come to the pitch and the training ground and the games. You feel it's totally different. It's just a different speed."

Of course, Monday's session at Anfield was held behind closed doors without supporters in attendance – a reality all 20 Premier League clubs will face for at least the remainder of the 2019-20 season.

Lovren admits it's something he and his teammates are still adapting to, but they are aware of all the backing they'll still receive from around the world.

"We have different paths now, where to go, how you come in and it's not the easiest way," the No.6 explained of the visit to L4. "But we are respecting all the rules from the Premier League and the government.

"Everybody is safe – this is the main thing. Hopefully everything will be [normal] soon and then we have our normal life back.

"I wish everyone could have a sound at home and scream through it so we can hear it and just to feel this passion!

"We will miss it but we are getting prepared to work for that and to be prepared that when some moments will be hard, we should think about our fans who are sitting at home and cheering about us."