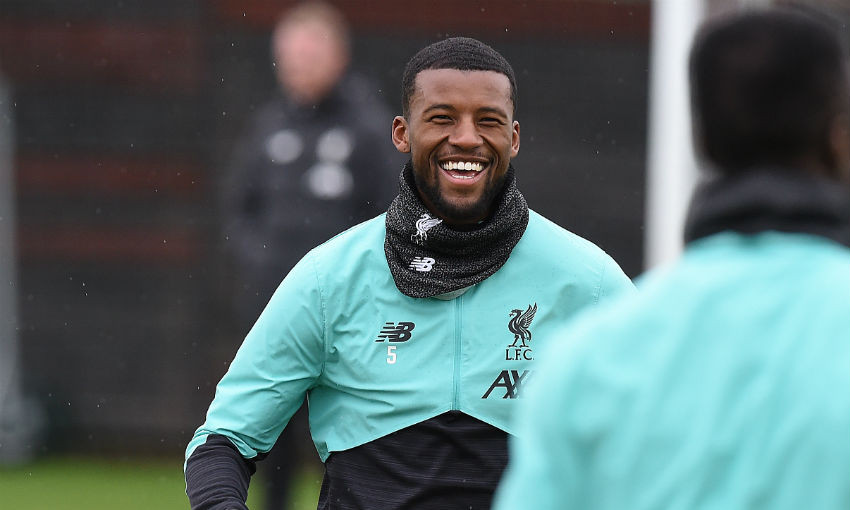 In the humble opinion of Georginio Wijnaldum, a simple walk around Melwood would prove Liverpool aren't at all content with what they've done so far this season.

Honesty, focus and a packed gymnasium before training are prevalent at the first-team training facility on a daily basis.

And it's those sort of standards, Wijnaldum believes, that see Jürgen Klopp's side sit 22 points clear at the top of the Premier League.

"Nobody [here] will say that it's difficult to have the focus on one game at a time," the midfielder tells Liverpoolfc.com from the West Derby complex. "You just want to do it as good as possible.

"We also have a manager who puts us with both feet on the ground when we have a moment when we're not concentrated on something like that.

"We also have a team that wants to be as successful as possible. For that, you need 100 per cent concentration and give effort every time on the pitch.

"Off the pitch, when you need treatment and those things, everyone is busy with doing as good as possible. That's what helps us and we help each other and try to keep each other sharp.

"I think that's why we have the run we have right now because we are just focused on doing even better than before."

Inside Training: Reds prepare for West Ham at Melwood

Wijnaldum feels adopting such an attitude creates the kind of camaraderie that can help a team emerge through the highs and lows of a football season.

Liverpool are looking to return to winning ways again after the Champions League defeat at Atletico Madrid as West Ham United arrive at Anfield on Monday night.

"We've played together a few years already, so we also know each other as people," the No.5 continues. "We just have a group that is like friends. With each other, it feels like family.

"Maybe sometimes we have to be fair with each other and say something which the other person might not like.

"But that helps us also to be a better team because we all expect from each other that the person you play with is giving 100 per cent. We, as a team, have to make sure he does it.

"We're just honest with each other and try to help each other out to do as good as possible."

As the business end of the season draws nearer and the Reds get closer to their objectives, Wijnaldum insists the approach that has served the squad so well up to this point will remain in place.

He details: "Think of one game at a time, try to give everything [in] every game and at the end you will see what will happen. We don't really think about results and those things.

“We just think about the game and try to give everything we have and do as good as possible so we have the biggest chance to win the game.

"Until now, it went quite well, really well, so we hope we can continue this run until the end.

"It's hard and tough but on the other side, we also enjoy it because it's a good feeling if you give everything during the games and feel that you've succeeded at the end of the game. We also enjoy the journey – I have to say that it's easier because we are winning games.

"But just train hard, look at it game by game and don't look that far ahead. It worked well for us until now."

The upcoming encounter with West Ham represents an opportunity for Wijnaldum and his teammates to maintain their incredible form in the Premier League.

It's a fixture against a familiar opponent as the Reds search for their 18th successive top-flight victory, with the two sides last meeting in late January at London Stadium.

"It's going to be a difficult game," Wijnaldum predicts. "When we played away it was already a difficult game – they dropped deep, they made it difficult for us to play our football. I think they're going to try to do that again.

"Every situation is different, we just have to deal with the situation we will be in at that moment."