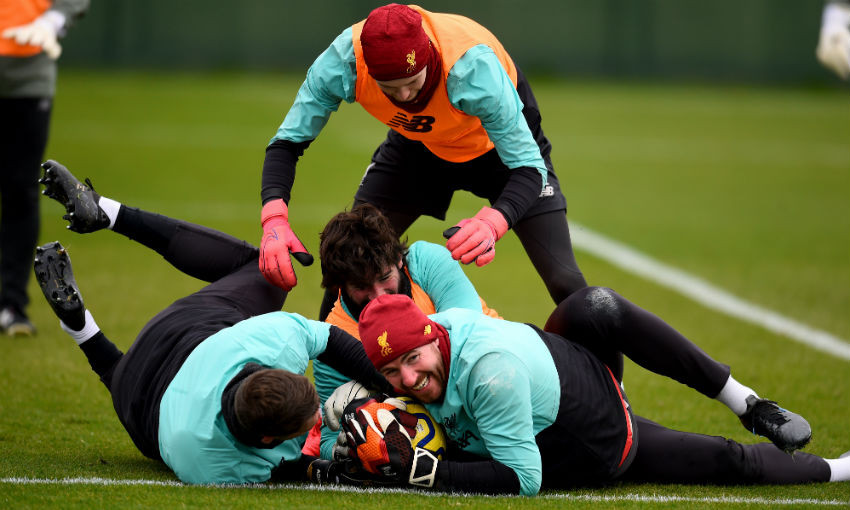 Andy Lonergan believes standards of a ‘ridiculous’ level are the driving force behind Liverpool’s near-flawless season so far.

The experienced goalkeeper has contributed to the successes of 2019-20 on the training pitch by providing support to Alisson Becker, Adrian and Caoimhin Kelleher both at Melwood and on matchdays.

And he has provided a glowing insight into the way in which Jürgen Klopp’s world and European champions, and Premier League leaders, operate.

“I don’t want to say just being among this group is enough because if I don’t train well I am disappointed and I want the next day to come around so I can put that right,” Lonergan, formerly of clubs including Preston North End and Leeds United, told The Times.

“It could be from Mo or Millie [James Milner]. That is another motivation because if you are on their team, say Millie, Hendo [Jordan Henderson] or Virgil [van Dijk], you don’t want to let them down. You have to perform because they are not shy of giving you a rollocking.

“That is just the standard. If Mo gives the ball away, they are going to be onto Mo. That is why they are doing as well as they are. The standards are ridiculous.

“You get people and players at clubs who say: ‘See him, he’s not a trainer, he doesn’t fancy it, he just plays on a Saturday.’ Well, here, if you don’t train, you don’t play. Simple.

“The professionalism is unbelievable. I have been guilty in the past of thinking: ‘They’ve got it easy those Premier League boys. They are not playing every midweek, they have the best travel etc.’

“But the schedule is absolutely relentless and add to that the training is never less than 100 per cent. The training pitch is where they make the Saturday easier. It is like the boxer who says hard work is the camp, the enjoyment is the fight. It is the same here.

“My friends will say: ‘Who is not the best person? Who is this or who is that?’ I mean this: it is the most honest, down-to-earth squad that I have ever been in. People might find that hard to believe, but they are such genuine, good lads. There is just one goal for all of them.

“We win on Saturday and on Sunday morning we have a five-minute meeting in the dressing room and the gaffer is like, ‘next game.’ That is what it has been like all season. Win the next game.

Inside Training: Laughs, skills and Alisson tests his touch

Lonergan takes huge enjoyment from working in such an elite environment, too.

“To be honest, it is a lot easier to motivate myself now than probably the last five years of my career,” he said. “I made some moves that didn’t work out and so my motivation maybe wasn’t as high as it should have been.

“Here, you have to prove every single day that you are at the level. That’s the motivation: to make saves, to be a good guy around the place. I love it. I know people might think it lacks a bit of ambition in a way, but for me it was a chance to try to excel in a different way.

“I have to prove that I can be in this company. After 20 years in the game, you need something that keeps you on your toes.”

Of course, Lonergan works closely with Alisson on a daily basis and considers Liverpool’s No.1 to be peerless in the world of goalkeeping.

“Firstly, as a person, he is the most humble guy I have ever met. Ever,” he stated.

“As a goalkeeper, there is no-one in the world near him. He makes everything look easy and he can do absolutely everything.

“You might watch Match of the Day and see him make one save, but if you watch him for 90 minutes and see what he does to affect the game, his decisions, his handling, his passing. Everything is outstanding.”