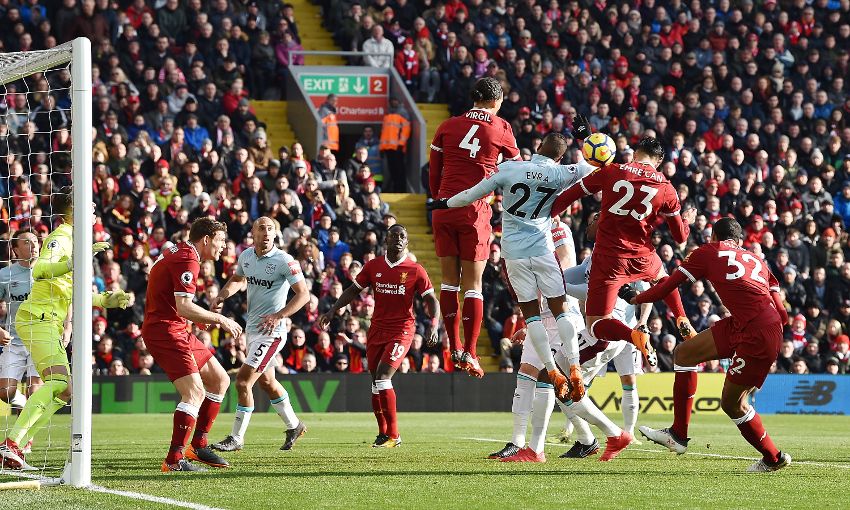 Liverpool's opening goal in the 4-1 victory over West Ham United was a perfect execution of a routine worked on in training ahead of the game.

With an action-packed Premier League encounter still goalless shortly before the half-hour mark, Mohamed Salah whipped in a corner from the right that Emre Can met with a header down into the bottom corner.

The midfielder later revealed the set-piece success came as a result of practice at Melwood on the eve of the meeting with the Hammers.

“I’m happy that I could score – because we trained it yesterday and I scored like that. It’s always good when you train something and score like that. I’m happy, of course, when I can score and help the team,” Can told Liverpoolfc.com.

On the performance in general, the No.23 reflected: “It was a solid win.

“We did our job. We played good football and kept the ball well. We had a lot of chances – we could have scored a few goals more. But we did our job and it was good.

“In the first half we did OK and played good football at times. We kept the ball well, which is always good. In the second half we scored three more goals.

“Unfortunately, we conceded a goal because of my mistake, I’m sorry for that but it can happen of course.”

Can’s header was Liverpool’s 100th goal of the season in their 40th fixture.

The prolific trio of Salah, Roberto Firmino and Sadio Mane then each got on the scoresheet – and the Germany international was almost lost for words to describe them.

“It’s amazing,” he said. “The front three can score in every game at any minute. It’s unbelievable how good they are. They did it again. We are always happy if they can score and we win.”

The Reds climbed to second in the Premier League table by virtue of defeating the Hammers, with Manchester United and Chelsea set to clash on Sunday.

A week’s break awaits Jürgen Klopp’s side before they attempt to repeat their performance when Newcastle United visit Anfield.

“It’s a really important [time of the season],” added Can.

“The next game is next week against Newcastle at home again – and we want to win that as well. We have to look from game to game and our aim is to win every game.”