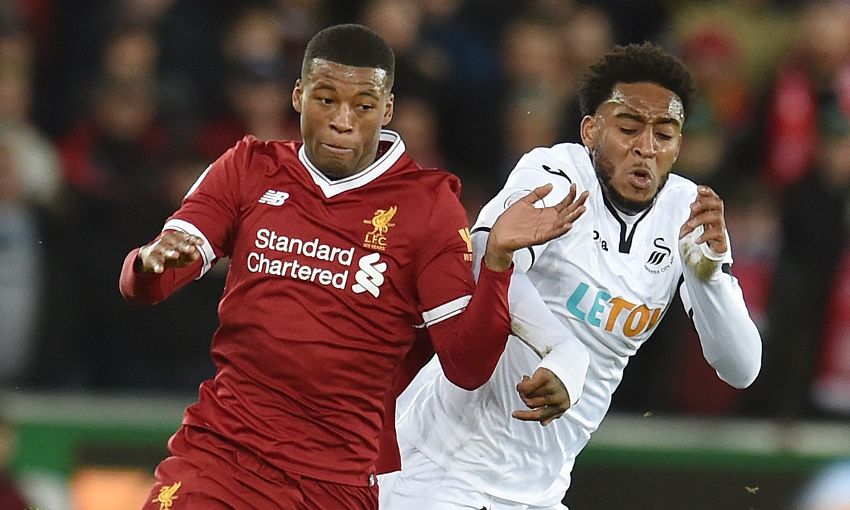 Liverpool's failure to get going in the first half at Swansea City was the significant factor in their 1-0 defeat, according to Georginio Wijnaldum.

An 18-game unbeaten run came to an end at the Liberty Stadium, where Alfie Mawson’s strike five minutes before the interval was the difference between the sides.

The Reds threatened more in the second period – and Roberto Firmino sent a header against the post in the final seconds – but it was not enough in Wales.

“That’s how we wanted to play in the first half also, only we didn’t,” Wijnaldum told Liverpoolfc.com post-match.

“We’re more disappointed because we gave one half away, we gave them their only chance and they scored a goal. If you play the whole game like we played the second half you would be disappointed but at least you tried. We didn’t in the first half, we didn’t do what we had to do.

“I thought the ball was in [from Firmino’s header] but unfortunately it wasn’t. We were not lucky in the finishing. You have those games. We must keep the confidence and look forward.”

Jürgen Klopp’s men had not suffered defeat in the Premier League, or any other competition, since a mid-October reversal against Tottenham Hotspur at Wembley.

The Reds remain in the top four with 14 fixtures left to play, and Wijnaldum called on the team to quickly reproduce the intensity and discipline that helped them go three months without a loss.

“We had the unbeaten run, it was a good thing,” added the Dutchman.

“But it was only because we did the things we had to do on the pitch, we were 100 per cent concentrated and we were sharp from the first minute. That’s what we have to do again.”