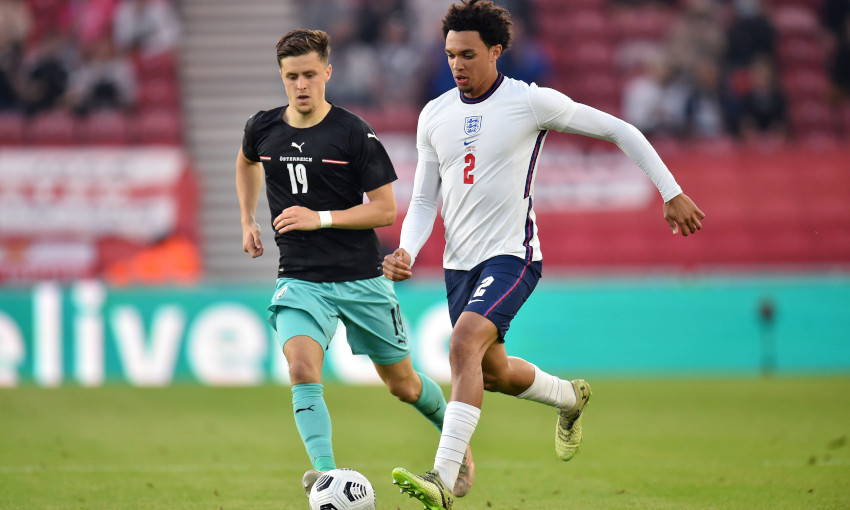 Alexander-Arnold started for England at Riverside Stadium and played 87 minutes of their 1-0 win against Austria in a pre-Euro 2020 friendly, but the defender had to go off late on after signalling an issue.

“We’re going to have a little look. It’s obviously not good to see him have to come off in the way he did,” England manager Gareth Southgate told ITV post-match.

“We’ll just have to assess him over the next 24 hours. I think [it is a] thigh [injury] but the medical team are still assessing it. We just have to see. It’s not a good sign to see him have to walk off as he did. We’ll know more in the next 24, 48 hours.”

Jordan Henderson was an unused substitute for the Three Lions.

Elsewhere in warm-up games for this month’s European Championship, Georginio Wijnaldum and Andy Robertson faced off as Netherlands met Scotland in Portugal.

They were involved for half an hour and 70 minutes respectively, and each claimed an assist, as the match ended in a 2-2 draw.

Neco Williams and Harry Wilson both started Wales’ friendly clash with France in Nice, though the former’s night was somewhat harshly brought to a premature end.

Williams was judged to have handled inside the box midway through the first half and the referee followed up his award of a penalty with a red card for the Reds full-back.

Wilson was withdrawn on the hour mark, meanwhile, as Wales lost 3-0.