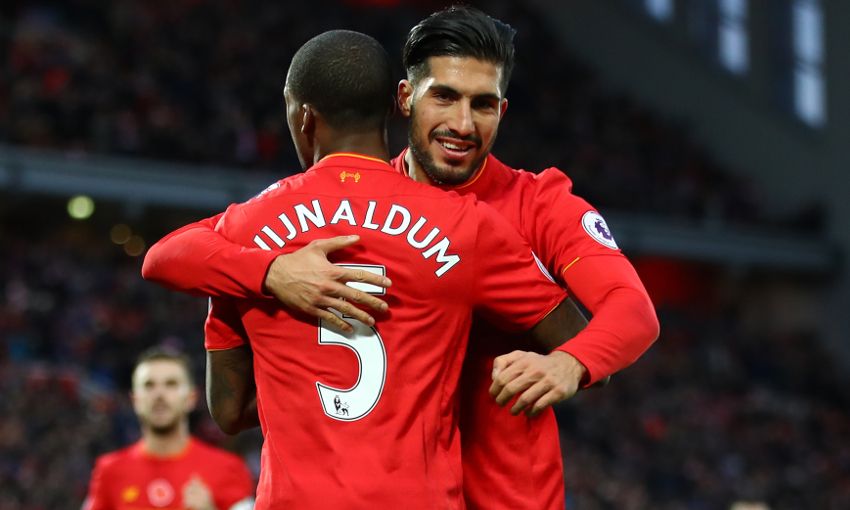 In pictures: LFC's win at West Brom from another angle

Georginio Wijnaldum's value to this Liverpool team as its 'link man' should not be underestimated, according to his midfield colleague Emre Can.

The pair have been constants for Jürgen Klopp to depend upon in the centre of the park in recent weeks as the manager has adapted to the enforced absences of Jordan Henderson and Adam Lallana due to injury.

Can and Wijnaldum have risen to the challenge, helping the Reds go seven games unbeaten to remain on course to achieve their aim of Champions League qualification with five Premier League games left.

The latter, who was named the club’s Standard Chartered Player of the Month for March, recently spoke of his pleasure with being trusted as the connection between defence and attack in Klopp’s system.

And, like the rest of the squad, Can is hugely appreciative of the No.5’s efforts since he arrived from Newcastle United last summer – even if they can occasionally go under the radar.

The Germany international told Liverpoolfc.com: “He’s a very, very important player for us, because he is the link man.

“He is doing it very well. He’s strong as well, a very strong guy. He can play, he is a very good footballer, but defensively he is working very well [too].

“He has done brilliantly for us so far this season. He has played very well. He is not ‘eye-catching’ sometimes but he is doing the dirty work for us. He is a very important player.”

The second half of the Merseyside derby at Anfield earlier this month saw another option added to the midfield mix with the introduction of Trent Alexander-Arnold.

Having previously been used in a defensive role, the Academy graduate replaced Philippe Coutinho for the closing stages of the 3-1 triumph and was unfortunate not to add his own name to the scoresheet from an advanced position.

“I like his character, because when you are young you have to work hard, you have to get your head down – and he is doing that, as are the other guys as well.

“He is training very well and when he comes onto the pitch and gets his chance, he is there.”

'Thiago and Liverpool is a perfect match'