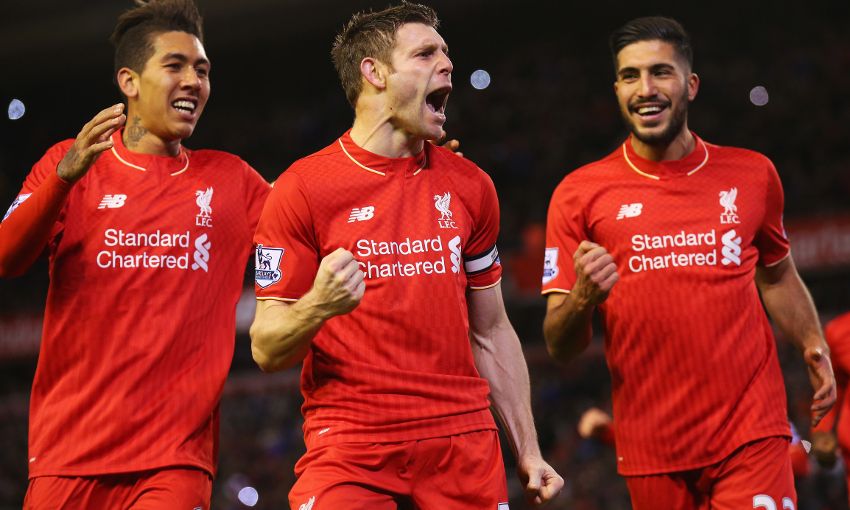 How can I follow LFC v Borussia Dortmund tonight?

With an atmosphere matching 'anywhere on the planet' at Anfield, James Milner expects the home fans to help Liverpool rather than hinder Borussia Dortmund on Thursday night.

A week after soaking up the sights and sounds of a Signal Iduna Park blanketed in yellow and black, the Reds will welcome the well-drilled Bundesliga side to their own ground to settle the Europa League quarter-final.

They do so from a solid position too, having secured a 1-1 draw in the opening leg in Germany as Divock Origi and Mats Hummels traded goals in either half of a game that lived up to its pre-match billing.

But work remains to be done if Jürgen Klopp’s team are to reach the final four – and Milner believes the crowd can play a crucial role in Liverpool overcoming a club many have considered favourites for the trophy.

He told Liverpoolfc.com: “Any player wants to play in the big games and the best atmospheres. European nights at Anfield are definitely right up there with anywhere on the planet.

“That’s going to be massively important for us no matter what happens. Even if the worst happens and they get an early goal, [the fans] can roar us on to get back into the game.

“We managed to nullify their fans – which is a great atmosphere as well – and got a good result. Hopefully we can use our atmosphere.

“There are a lot of experienced players in there and they are used to playing in front of the Dortmund crowd and other big games, so I think they’ll probably be used to it.

“It can probably help us more than it can damage them. The fans are always brilliant and hopefully it’s another special European night.”

Klopp’s charges might have scored more than once in Dortmund last Thursday had it not been for several reaction saves by BVB goalkeeper Roman Weidenfeller.

Liverpool often had to drop deep to stem the pressure from a side brimming with attacking talent, but continued to forge opportunities of their own when breaking with pace on the counter.

Match stats from the first leg

And though a goalless draw on home soil would send Milner and co through, the vice-captain is adamant the Reds will press for a victory rather than simply defend their position.

“We go out to win every game, so that’s going to be the aim,” the No.7 said. “We want to keep it tight at the back – if we don’t concede we’re through, so that’s obviously a big plus for us.

“But we’ll be looking to win the game as well. If we can make sure we’re solid at the back, the longer the game goes on if they haven’t scored they’re going to have to come out, and that will open a few gaps for us to exploit.

“We’ll be going out there to win the game, finish the job in style and kick on to the next round. It’s a good test for us, they’re a top team.

“We’re getting to the latter stages of the competition now and the final is in sight. But if you want to win trophies, you have to beat the best teams – and Dortmund are definitely up there as one of the best teams in this competition.

“We have put ourselves in a good position after the first game and hopefully we can finish the job.”

With Jordan Henderson out injured, Milner is set to skipper the side in the second leg.

The 30-year-old has started 10 of the last 12 matches and played the entirety of Sunday’s win over Stoke City – and is relishing the intensity of big game after big game.

He said: “I feel good. Sometimes when you get the rest all week it knocks you off your rhythm a bit and you maybe don’t feel as good in your legs when you get out onto the field.

“So I’m feeling good at the moment, it’s nice to keep getting the games. When you’re winning and the team is playing well, you don’t feel fatigue as much.

“Hopefully we can continue that and get another good result on Thursday. They have been high-intensity games as well – Dortmund and Spurs play at a high tempo.