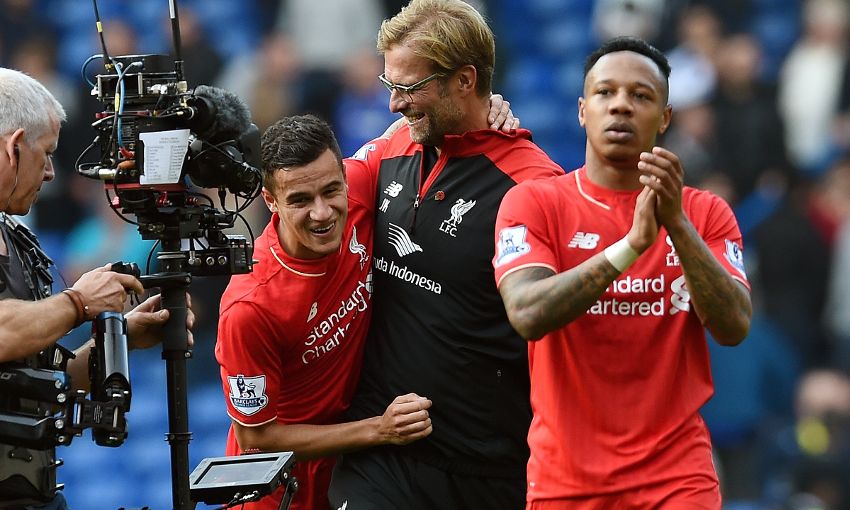 Philippe Coutinho's concentration was the key to Liverpool's 'brilliant' No.10 bagging a crucial brace in the 3-1 victory over Chelsea, according to Jürgen Klopp.

The Brazilian turned the tide in his team’s favour at Stamford Bridge on Saturday when he shimmied around his marker and found the left corner of Asmir Begovic’s goal with a precise curler.

His compatriot Ramires had put the home side ahead after just four minutes in London but Coutinho’s intervention before the half-time whistle changed the dynamic.

Klopp’s charges emerged from the interval with belief and began to dictate proceedings, culminating in the Reds’ ‘magician’ finding the target again from the edge of the area.

Christian Benteke then ensured the result was beyond doubt by knocking a third into the bottom corner late on to secure the manager’s first Barclays Premier League win.

“Phil is a very good example of our situation,” Klopp told Liverpoolfc.com post-match. “He is brilliant – everybody knows he is brilliant.

“But there are moments in your life where you have to work for it to look easy. It wasn’t easy, but he stood in the game and was concentrated.

“He had some passes he is able to play much better. But then he was concentrated, he helped us and made the difference. That’s very important.”

The boss named Roberto Firmino in attack for the clash with the reigning champions and the summer signing followed up his bright display against Bournemouth with another hard-working performance.

Klopp explained why the Brazil international got the nod ahead of Benteke from the off and predicted more to come from the former Hoffenheim man.

He said: “The decision between Roberto and Christian… Christian is not 100 per cent, so he needs time to play. Now he is a big step ahead so we can plan with him.

“He played against Southampton, then Bournemouth he couldn’t – little problems. We could bring him on with fresh legs. That’s perfect.

“Roberto is very important in this position for us because he can hold the ball, he plays between the lines and he is very creative. He can do much better, that’s the good news, but it was not too bad.”