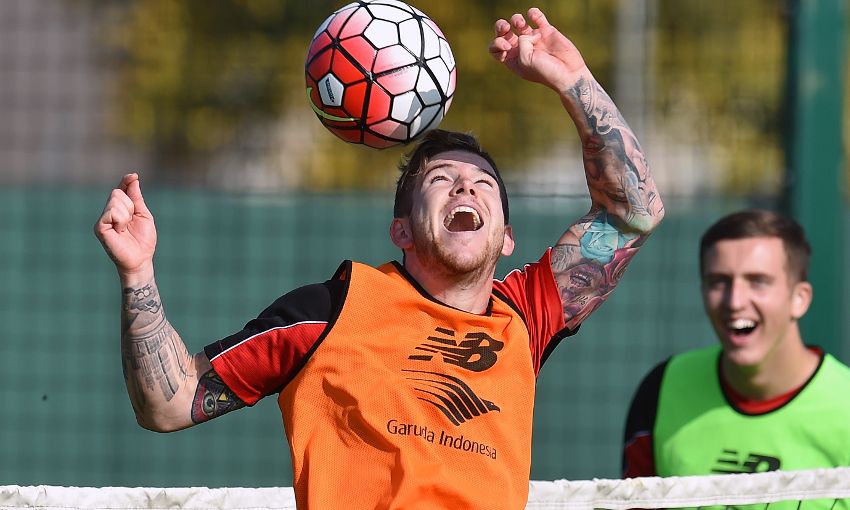 A new era begins for the club on Saturday when the German manager takes charge of his first Reds game, away at Tottenham Hotspur in the Barclays Premier League.

Klopp has spent much of this week out on the training pitches at Melwood delivering fresh instructions to the squad for the trip to White Hart Lane.

He admits time will be needed to transfer the philosophy which brought such rich success at Borussia Dortmund, but the boss hopes to see green shoots in London.

Advocating the approach, Moreno explained to Liverpoolfc.com: “He has said to us that he wants an intense team – a team in which everybody has to run.

“I think it matches my way of playing. I am always aggressive, energetic and give my all, so it matches Klopp’s style of playing.

Klopp’s initial sessions in West Derby involved a depleted group of players due to a number of injuries and international commitments.

Moreno has been present from the start, however, affording the Spaniard an opportunity to quickly gain an understanding of how the new manager works.

And the wide-man echoed the stated view of teammate Lucas Leiva by highlighting the infectious enthusiasm Klopp and his staff bring to training.

The No.18 said: “He demands a lot of intensity during training, he wants us playing full throttle.

“He brings passion and emotion to each training session and that is, in my opinion, the key to making us feel together.

“He is passionate about football, he loves football and he transmits that to us. Now we have to take that onto the pitch.”

Klopp’s pedigree required little explanation upon his arrival at Anfield.

Toppling the might of Bayern Munich to win back-to-back Bundesliga titles with Dortmund and taking the team as far as a Champions League final were the attention-grabbers on his CV.

His challenge is to now recreate similar momentum with Liverpool, and the 48-year-old’s track record ensures immediate buy-in from his new players.

“I knew he was very intense, very smart and someone who analyses the opponent very well,” added Moreno.

“That has been reflected in what Borussia Dortmund have achieved, which has been incredible. It caught the attention of Europe.

“He had so many great players but you need a good manager to manage those players. Klopp did it very well during the time he was there and I hope he will do as well here as he did in Dortmund.”