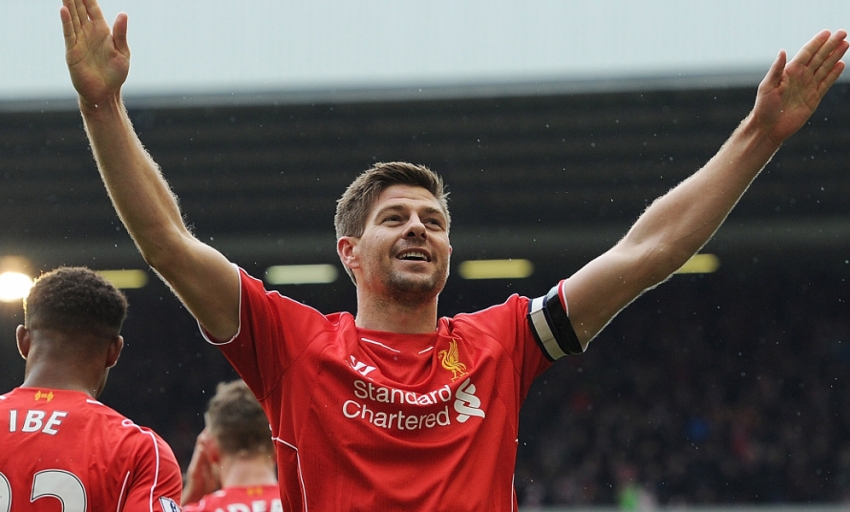 Defeat for U18s in season finale

Steven Gerrard admitted his elation at scoring a late winner against Queens Park Rangers on Saturday was tinged with a sense of relief after he'd earlier missed a penalty.

With three minutes left on the Anfield scoreboard, the captain rose highest to meet Philippe Coutinho's corner and plant a header beyond Robert Green to secure a 2-1 success for the Reds.

Just moments before, Gerrard had been left frustrated by the visiting custodian as, with the scoreline locked at 1-1, Green got both gloves on his penalty to prevent it from nestling in the back of the net.

However, not to be deterred, the 34-year-old had the last laugh when he glanced home goal number 184 of his Liverpool career to go outright fifth on the club's all-time leading scorers list.

Speaking to Liverpoolfc.com immediately after the final whistle, Gerrard said: "It was a poor penalty from myself and I am very disappointed with it.

"I changed my mind on my run up, which is something you can't do when you're a penalty taker. I take full responsibility for that, but it was nice to make up for it and help get the team three points. It's very big for us."

Usually so unerringly accurate from the penalty spot, Gerrard acknowledged it was unusual for him to have a change of mind during the run up.

He continued: "Maybe it was the game, the emotion, being desperate to score and get on the scoresheet...I don't know. When you're taking a penalty, you can't change your mind.

"I was looking at Rob Green for as long as I could and I felt like he was going to go to his right, my left, which made me change my mind. I should have had the confidence that I could still score even if he went the right way.

"I am very disappointed with the penalty, but delighted with the header and everyone goes home happy because we've got three nice points."

Liverpool's win over QPR was their first since suffering the heartbreak of losing the FA Cup semi-final to Aston Villa last month.

Gerrard concedes that 2-1 reversal at Wembley impacted confidence in the matches that followed at West Bromwich Albion and Hull City.

"Everyone wanted it desperately to reward the fans with an FA Cup final," said the skipper. "I suppose in the last couple of performances we've had a bit of a hangover from that setback.

"The manager has made it clear we want to finish as strong as possible, try to get maximum points in all of our remaining games and keep putting pressure on the teams above us.

"It was a big disappointment at Wembley, but when you play for a big club you've got to get over it, move on and look to the future. Hopefully next year this team and club can compete for all the trophies available."