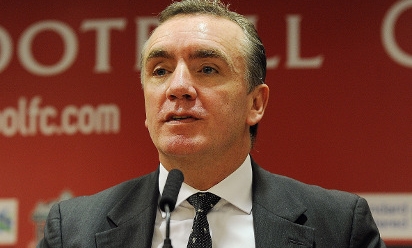 Suarez on verge of LFC record

Ian Ayre gave an interview to the Liverpool Echo today in which he discussed the club's policy on player contracts, FFP regulations, progress on the pitch and provided an update on Anfield regeneration. Here's what our managing director had to say...

We are very pleased with progress. A lot of work has gone on behind the scenes particularly with the acquisition of properties and architectural work to look at designs and plans which would be submitted for planning permission.

We've got a meeting coming up in the next few weeks with the steering group which is made up of the various parties who were present when the announcement about the regeneration was made. Certainly in terms of milestones that we set ourselves, we are on track. We're pleased with the way we're heading and there's no reason to feel anything other than optimistic.

The attitude I'm trying to put forward when we're negotiating with agents is that we want to do a contract which is fair for both sides. Fair often means the right amount of reward for a player who delivers. Everyone we bring through the door we expect to perform and do the best they can.  As long as any player does that they should be rewarded for it.

I'm not one of those who subscribes to the idea that players are necessarily overpaid. I think they make a huge contribution to the biggest league in the world. From the football club's perspective, our view has to be that people are rewarded for contributing towards what we achieve. As long as contracts are structured in that way then everyone wins.

If a player performs then he will be rewarded. That's the philosophy of the contracts we are offering and signing.

It's a bit of a legacy we have to deal with as agents always seem to know what every player is earning and what every contract structure is. But it's not something that's causing us too many problems. It doesn't matter what has gone before, it's about what's happening now.

We have good relationships with the agents we are dealing with. I've found in the main most agents are prepared to listen and find the best solution for both sides. Like any negotiation, if you give someone the opportunity to have it all their own way then they will. That's not going to be the case here.

We are being open, honest and fair in making it clear that the real reward comes from performance.

All the players we have got to commit, whether they're players coming in or those already here, shows that people believe in the plan and they believe in the manager. I certainly have never been in any negotiation over the past year or so where any player or agent has told us that they don't think Liverpool is big enough or bright enough as an opportunity.

We remain a world class club and a world class attraction to players. I read that Daniel Sturridge said he has joined the biggest club in the Premier League - that says it all. Here's a player who has played for Chelsea and Manchester City. He had seen the size, the power of this club and what it means after just a few days in the place.

There absolutely has to be some rules domestically. Six or more of the clubs will have them anyway as a result of playing in European football.

For me it doesn't make sense that only a third of the league is subject to that. Anyone with an aspiration to play in Europe will need to comply with UEFA so it makes sense for everyone to be ready. What form that takes is still a work in progress.

At the most recent Premier League meeting there was a proposal put forward which centred around two things. One was adopting a form of FFP across the Premier League, the other part of it was the introduction of some short-term cost controls to manage the level of investment clubs could make.

It's too early to say what the outcome of that will be. The positive thing is that the clubs of the Premier League are working closely together. There is a good, healthy debate and everyone wants something to come out of that.

We're sitting here in the most popular league in the world with the largest TV rights in the world and we have to protect the integrity of the clubs and the way they operate. I think there's an almost unanimous view that something has to be done to ensure we are all kept in good shape and well managed.

The ultimate goal is to protect the level of investment made by clubs so it balances well with the level of revenue. It's about keeping that in kilter. It's a great indicator of how professional the Premier League is compared to other leagues at times that all the clubs are working together. That has to bode well for the players and the fans. No-one wants to see any club go out of business.

We always said this year would be about putting the right foundations in place to build something for the long term. It was always going to be up and down. If you could just turn it on instantly then everyone would be doing it. We're quietly pleased with progress. From the early shoots of a better type of passing game to recent performances where you could really see it all coming together.

There's still work to do but we're certainly pleased that we're progressing. The players we've brought in are contributing and we're also pleased that Brendan and his team are getting more and more out of players who were were before. Nobody is hiding away from the fact there is still a lot of work to do but there has been real progress made so far.

Speaking to some of the players, they certainly feel that it's moving forward. They are enjoying the football and hopefully that bodes well for the rest of the season.

We have had sell out games all season and fantastic support from our fans both home and away. Speaking to people around the city, they are pleased with the football and like what they're seeing. The great thing about Liverpool fans is that they are huge big students of the game. They know what it takes to be great because this club has been very successful in the past.

The educated fans you meet know it won't just come in a heartbeat. No-one is expecting an overnight turnaround in form to get to the level of winning the league, but as long as they can see us making progress and chipping away at that gap then people will buy into it which they are.

As long as Brendan and the team keep improving on that and keep showing their commitment to that I'm certain our fans will be behind that. We will keep investing and adding to the group. Ultimately we will get to where we want to get to.

Have your say on stadium plan