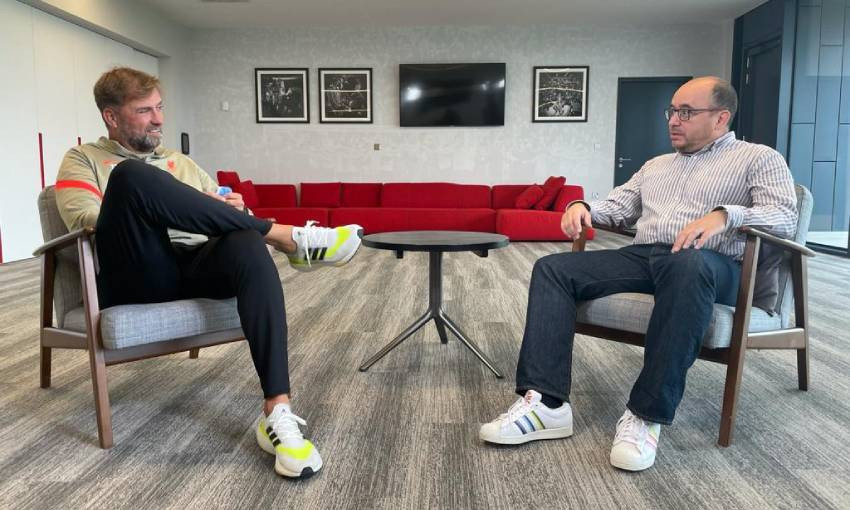 Kop Outs, which is backed by the club, is a fan group that was formed in 2016 to provide a voice for LGBT+ supporters, representing their needs and raising awareness of the challenges and concerns they face.

Following the offensive and inappropriate chant at Carrow Road, Jürgen invited Paul to the AXA Training Centre to discuss the impact of such chants on LGBT+ supporters, why they should not occur again, and the importance of inclusivity.

Watch or read their conversation below.

Red Together is Liverpool FC’s commitment to equality, diversity and inclusion and brings together the club’s aims to be the most inclusive in football, provide fair opportunities to as many different people as possible, and welcome and meet their needs in the best way possible.

Incidents of abuse or discrimination, either online or in person, can be reported to the club at www.liverpoolfc.com/reportabuse.

Jürgen: You are here today for a specific reason. Probably we both would have preferred to meet each other for the first time in different circumstances, but maybe first you tell me a little bit about yourself as a Liverpool supporter and why?

Paul: OK, so I guess I’ve been a Liverpool supporter pretty much all my life. My dad, who came over to England from Trinidad, was a lifelong Liverpool fan and that came with being in the family really. I grew up, got the chance to come here at university and got the chance to come back here and live here and come to Anfield regularly. Always followed the match, always enjoyed the games, Liverpool through and through.

Jürgen: Is it fair to say you moved to Liverpool because of LFC?

Jürgen: OK, I’ve heard that before! I moved here because of LFC! And you are a member of Kop Outs or…?

Paul: I’m the founder of Kop Outs. We developed Kop Outs because there is an issue of homophobia in football. We know there are very few out gay professional players. We’ve got the likes of Anton Hysen, son of a Liverpool legend, and many others. But actually only enough to make up perhaps a full team with a couple of people on the bench, in the whole of professional game history for men. There is something not right there in terms of the environment. And I’ve got too many LGBT+ friends who have expressed discomfort at being at the match or don’t want to go to the match because they are scared they might be left feeling uncomfortable.

Jürgen: Wow… yeah, now at the Norwich game, I only heard after for two reasons – the noise, thank God there was noise again; but as well the language, I don’t get all the songs – but there was obviously this specific incident.

Paul: Yeah and that was the ‘rent boys’ chant that was sung at the Norwich game, which is so unnecessary. And what people don’t necessarily realise is that it’s chanted at the player – but actually the people who hear it are fellow fans like myself, who then go from hearing You’ll Never Walk Alone and being embraced in fanhood and that fantastic atmosphere to then suddenly being left in the cold. It’s as if a bucket of cold water has been thrown over you in terms of the emotional state that hits you with. Because it’s such an unnecessary and vile chant that leaves too many gay fans absolutely out in the cold. And it’s wrong.

Jürgen: I never understand that, why you would sing a song that is against something in a football stadium. I never got that. I never liked it and I don’t like this. Especially in our case, we have probably the best songbook in the world.

Jürgen: No. Actually, I think it’s easy – it’s easy to decide not singing the song anymore. Obviously meanwhile, I heard it. It’s from no perspective the nicest song in the world, so it’s not necessary. It obviously makes people uncomfortable of our own fan group. For our supporters group and for me, that means: done, let’s go for another one. I really think it’s an easy decision and should be an easy decision. I can imagine now that people out there think now, ‘Come on, it’s only winding them up’ and stuff like this. But that’s the problem: most of the time we don’t understand.

Paul: It’s probably not even winding up the player, it’s more winding up and upsetting our own fans and other gay fans around the world.

Jürgen: Definitely. So, we can decide now: this is not our song anymore. I’m not sure if people listen to me but it would be nice. I don’t want to hear it anymore for so many reasons. Obviously we live in a time where we learn a lot in the moment. I’m 54 now and when I was 20 we said so many things which we didn’t think about and meanwhile, thank God, 34 years later we learn it’s just not right to say, even when you didn’t think what other people think is behind the message. But it’s still not right and that’s how we should see that as well.

Paul: And the values of us as fans are normally about supporting each other, about having each other’s back, about an injury to one being an injury to all. That sense of solidarity which is Liverpool through and through.

Jürgen: Definitely. From a player or coach perspective, I can say these songs don’t help us as well. It’s like a little bit of a waste of time. It’s definitely a waste of time because we don’t listen. I hear in the stadium when they start singing Bobby Firmino, Mo Salah, You’ll Never Walk Alone obviously, all this kind of stuff. That gives you goosebumps, that gives you a push. The other songs are a complete waste of time. If you think what you sing: you are an idiot. If you don’t think about what you sang in that situation: it’s just a waste of time, forget it and go for another song.

Jürgen: That’s good. Really nice to meet you, Paul. Will you be at the Burnley game?

Paul: I managed to secure a ticket finally yesterday. So I’ll be there, singing for the club. Thanks very much for your time, Jürgen.