To celebrate the 30th anniversary of Liverpool FC winning the coveted league and FA Cup double, a new feature-length documentary is to be aired exclusively on LFCTV GO later this month.

‘Double Winners ’86 – On The March With Kenny’s Army’ relives what still remains one of this club’s greatest ever achievements.

To win the Football League Championship and FA Cup in the same season was a feat deemed almost impossible.

Even the great European Cup-winning Liverpool teams had failed in their quest for this highly-coveted domestic double.

Only two clubs that century had previously achieved it and at the outset of the 1985-86 season, no-one gave Liverpool a chance.

What followed was a triumph against adversity.

Amid mounting chaos on a social and sporting front, Liverpool Football Club rose from the ashes of its then darkest hour to create history. 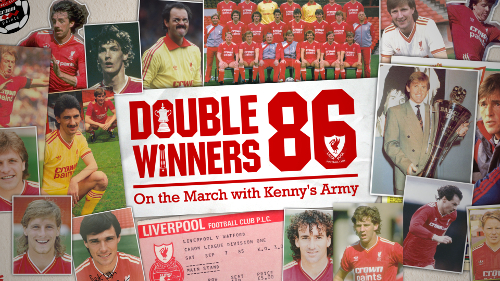 The path to glory began against a backdrop of tragedy and despair.

The Heysel Stadium disaster of May 1985 had cast a huge shadow over Anfield and the critics were queuing up to write about the end of a once glorious era.

The previous season had seen the Reds finish trophyless for the first time in a decade and with Kenny Dalglish recently appointed as the club’s first ever player/manager the future was uncertain.

Everton had re-emerged as a major force and Manchester United then swept to a much-heralded 10-game winning start.

What followed has gone down in history and now, three decades later, the most in-depth story of that unforgettable campaign is set to be told.

Explained through the memories of those who played a key role in that team and brought to life with extensive archive footage, some of which has rarely been seen, it’s a documentary not to miss.

It will be premiered exclusively on LFCTV GO later this month. For further details stay logged on to Liverpoolfc.com.