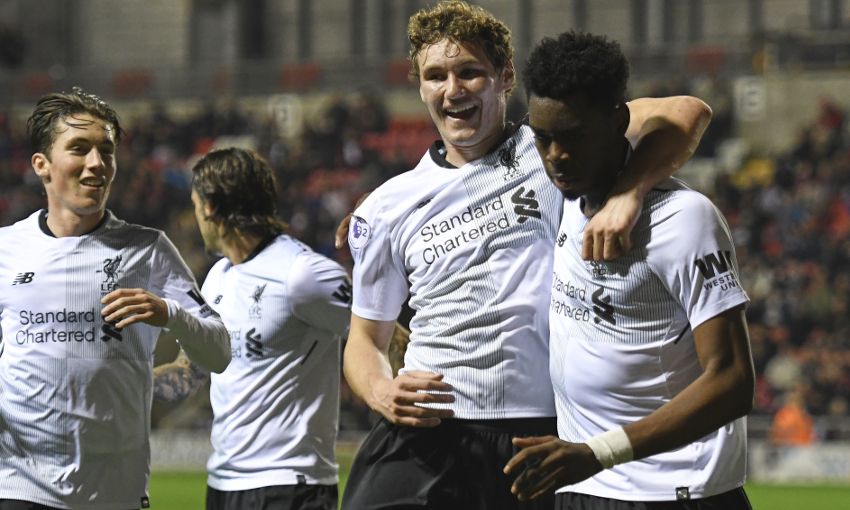 A composed conversion by Ovie Ejaria in the early stages was the minimum reward for a dominant first-half display by Neil Critchley’s team at Leigh Sports Village.

United briefly threatened to snatch something from the game when James Wilson levelled on the hour – only for a strong response from the Reds to yield quickfire strikes through Marko Grujic and Harry Wilson that secured three points.

Critchley was able to name an eye-catchingly strong line-up, with the likes of Trent Alexander-Arnold, Jon Flanagan, Grujic, Danny Ings and Ben Woodburn bolstering a side determined to make amends for defeat at Derby County a week ago.

The first sight of goal was crafted by United in the second minute but Wilson sent his effort the wrong side of the left post after running onto a through ball in behind.

And Critchley’s side assumed complete control from then on.

Woodburn should have broken the deadlock on five minutes. Alexander-Arnold fed the ball around the opposition defence to Wilson down the right and the Welshman picked out his teammate with a perfect cross that was nodded over the crossbar.

Next, a sweeping Liverpool passing move involving Alexander-Arnold, Matty Virtue and Wilson saw the latter come agonisingly close to serving Ings a tap-in when he squared towards the striker.

The breakthrough arrived in the 14th minute instead.

Woodburn’s tenacious pressing in United territory won possession and when the No.7 teed up Ejaria ahead of him to the right, the midfielder retained his balance, stepped past his marker and rolled a fine finish into the far bottom corner.

The hosts were finding it hard to disrupt Liverpool’s confident use of the ball and Alexander-Arnold – a constant influence from right-back – might have done better than thrash off target when Ings unselfishly set up the 19-year-old inside the area.

For all the visitors’ dominance, however, the advantage remained one goal and Demetri Mitchell reminded Critchley’s charges of that fact before the break by ducking into shooting space from the left and swerving a decent strike narrowly wide of Kamil Grabara’s post.

The action continued to be mostly one-way – in the direction of the United goal – when the second half kicked off and it could have been 2-0 within a minute of the restart.

Alexander-Arnold lofted an excellent pass over the backline to find the run of Ings, whose touch was clean but subsequent effort under late pressure was thwarted by Kieran O’Hara.

The first-team forward was left even more frustrated 10 minutes later. Ejaria slid in Wilson for another attempt that was stopped by the United goalkeeper and Ings’ follow-up was blocked on the goalline.

Liverpool’s failure to extend their margin was punished on the hour mark.

A powerful run through the middle of the park by Josh Bohui allowed for an assist into Wilson, who knocked a bobbling finish across Grabara for the equaliser.

Critchley could not have wished for a better response, though.

Grujic made his physical presence count from a left-hand Woodburn corner to lose his marker and nod a header down and into the net and, after Grabara had denied Bohui from a similar position at the other end, Wilson made certain of victory by breaking through and smacking a clinical shot beyond O’Hara.

The Liverpool ‘keeper was called upon to preserve the advantage with smart saves to keep out efforts from Wilson and Bohui, while the unlucky Ings endured another goalline clearance in the last minute, but the points were in the bag for the Premier League 2 leaders.