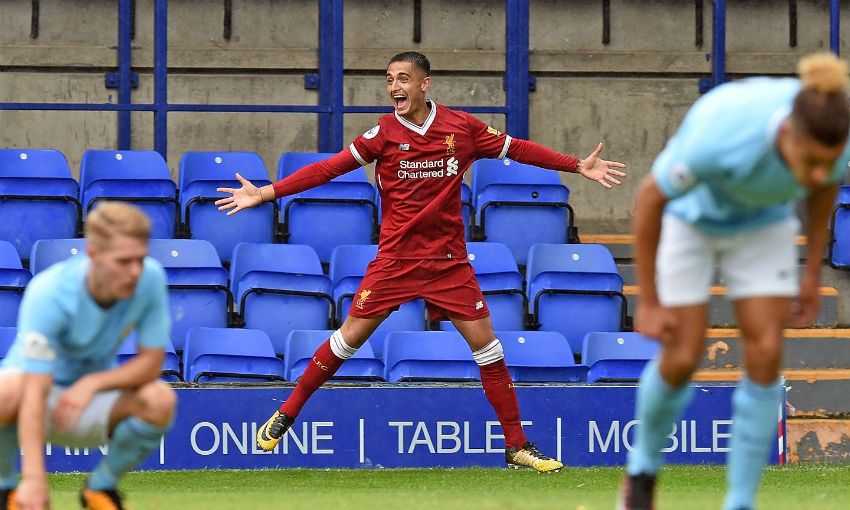 Yan Dhanda reflected on his stunning late winner for Liverpool U23s against Manchester City on Sunday by saying: 'I knew I had to make an impact.'

After coming off the bench as a first-half replacement for Danny Ings, who was substituted as a precaution, the 18-year-old curled home a delightful effort in the 89th minute to break the deadlock.

The 1-0 victory made it four wins in a row in Premier League 2 for Neil Critchley’s side, who top the table.

Describing his late goal, Dhanda told Liverpoolfc.com: “I was really happy to see the ball go in. I was on the bench and I thought when I came on I’ve just got to make an impact.

“Luckily the ball fell to me, I took it inside and managed to score into the top corner.”

Sunday's victory at Prenton Park was the second Premier League 2 match in a row that the Reds' U23s have secured three points with a late goal, and Dhanda insists that is down to the team spirit within Critchley's squad.

He added: “In training we push each other every day to the limit and it’s paying off on the pitch.

“We just keep going as a team and we know if we get a chance near the end there’s always a chance to win it like we did against Arsenal and now Manchester City.”

Dhanda has moved up permanently from the U18s to the U23s in 2017-18 and after netting two goals already in Premier League 2, is enjoying playing alongside the likes of Harry Wilson and Rhian Brewster.

“There’s so much talent going forward,” he continued.

“I just love playing alongside Rhian and Harry because I know when I’m in space they will find me.

“It’s a little bit tougher physically [at U23 level] but I’m enjoying playing with a new group under Critch who was my manager at U18 level.”