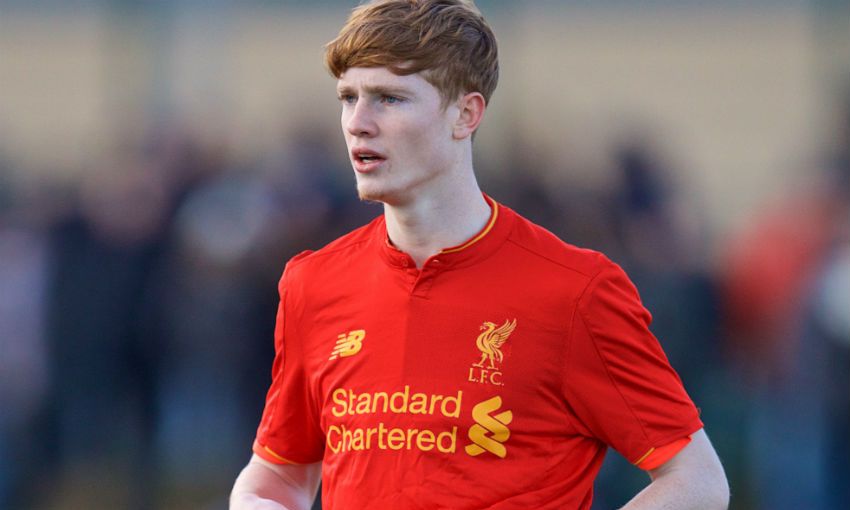 'Trent's display showed he has gone up a level'

Glen McAuley, in his own words, 'likes scoring goals'.

The Dublin-born striker’s total of 13 so far in 2016-17 makes him the U18s’ leading marksman in what is his first season with Liverpool.

Earlier in the campaign, Neil Critchley praised McAuley’s work ethic and labelled a player who turns 17 later this month an ‘old-fashioned centre-forward who always puts himself in goalscoring positions’.

“When he does that, more often than not he finishes,” added the U18s boss.

So, does McAuley agree?

“I just like to score goals! I wouldn’t say I’m ‘old-fashioned’...,” he laughs, when reminded of his manager’s words by Liverpoolfc.com.

“But yeah, that’s the way I like to play - to get in behind and get goals.”

Goals, and the players who score them, are a recurring theme throughout our chat at the Academy - which came after training and before a team trip to the cinema - earlier this week.

It’s clear why Critchley has also described McAuley as a ‘bubbly character’ as the young Irishman smiles his way through a conversation that ranges from his favourite footballers (spoiler: they’re strikers) and food, to Michael Jordan and what part of his game he’s been working on with a certain Steven Gerrard.

Read on to find out more about McAuley in the first of Liverpoolfc.com’s new ‘Meet the Academy’ series… 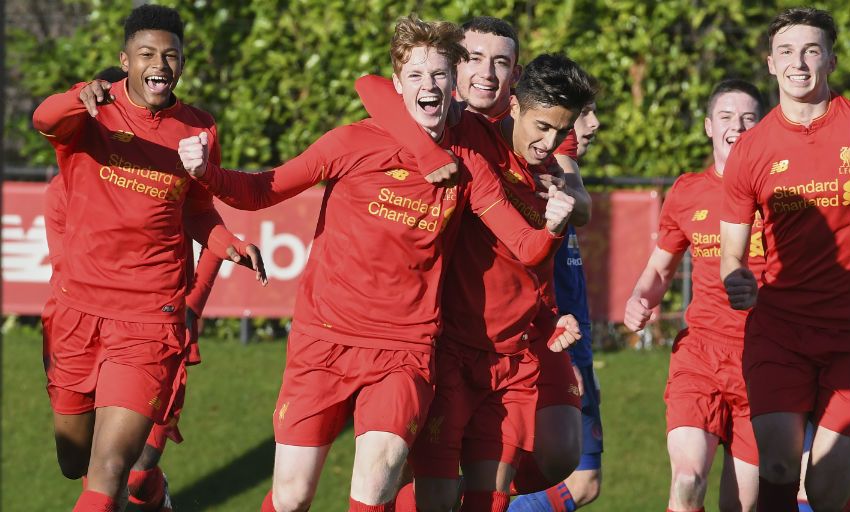 How are you finding life at Liverpool?

“It’s good, I’m enjoying it. Everything’s going good, so hopefully I can carry on. Everyone’s been nice and we all get along, so it’s good.”

Is this the first time you’ve lived away from home?

“Yeah, and I like it - you don’t get told what to do as much! I live with house parents in Rainhill, right beside the school. I go to the school on Mondays, Thursdays and Fridays.”

Who did you play for before moving here last summer?

What made you choose Liverpool?

“When I got here, it just felt like the most family club. I felt welcome here, and my dad’s a Liverpool fan as well.”

Do you support the Reds too, then?

What’s it like having Steven Gerrard working here as a coach?

“Amazing. Just seeing him and everything, and then talking to him - he’s just a normal man, funny as well! It’s great having him around the place.”

Gerrard was on the sidelines for the U18s’ draw with West Brom last weekend. How does it feel when he’s watching you play?

“It makes you want to play better, doesn’t it? You try to not make mistakes.”

What have you spoken with him about?

“I’ve just been having normal conversations with him. And then he’s told me about using my arm to hold people off in training, because I need to work on my hold-up play and he’s helping me with that.” 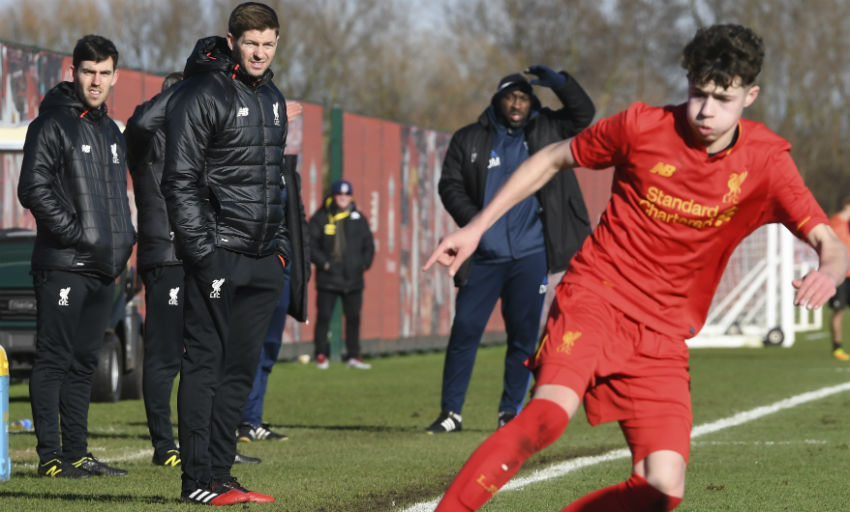 “Diego Costa. I like Costa, he’s aggressive and he’s a good finisher. Once he gets a chance, it’s a goal.”

“I don’t know with that one, I don’t have one person who’s come into my head. Robbie Keane, he’s from Tallaght, where I’m from in Dublin, so probably him. If I could do everything he’s done…”

“Getting a contract for Liverpool and so far this year being top scorer in the U18s.”

“To play for Liverpool’s first team, that’s my main aim. Going to a World Cup with Ireland, that’d be good too.”

“I’m going to have to go for Ireland against Italy in the Euros last year, that was amazing. Robbie Brady scored with a last-minute header. We had all my friends around my house back in Ireland for that game – my house was shaking and everyone was going mad!” 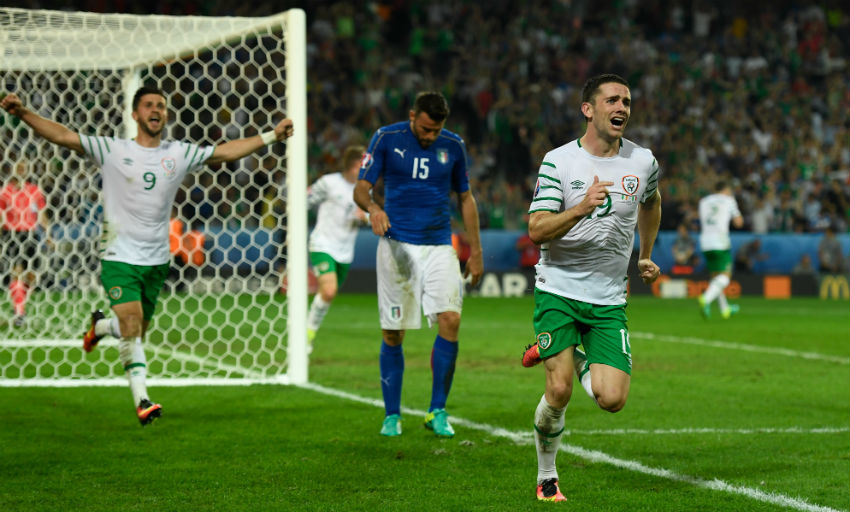 “I like basketball. I like Michael Jordan, 23’s my favourite number and then I like his shoes as well so that got me more into watching basketball! It’s quick, isn’t it? It’s always full of action.

“I’m not very good at it, I just like watching it. I played a little bit, but only in school and I was terrible so I thought ‘scrap that off’! The Cleveland Cavaliers are my favourite team, because of LeBron James and Kyrie Irving.”

“It was history until I moved over here. I liked learning about Irish history. I like science - chemistry in particular. Once I’ve finished playing football I’d like to do something with chemistry. I’d like to go to uni to study it, but it depends how football goes.”

“Do you know what ‘coddle’ is? It’s an Irish dish. It’s a stew with boiled sausages, bacon, potatoes, tomatoes, leek in a soup kind of thing. It’s my favourite, but it’s only in Dublin.”

Sounds a bit similar to Scouse. Have you tried that yet?

“Fresh Prince of Bel Air. I’ve already watched them all before they came on Netflix but now I’m watching them all again - they never get old, do they?!”

What are you listening to at the moment?

“I like rap music. London rappers, Manchester rappers like Jay Silva and Yxng Bane. I like Bob Marley as well - ‘Three Little Birds’, ‘Redemption Song’. The last album I listened to was ‘Legend’ by Marley, I listened to it this morning.

“We have the speaker on in the changing room and that’s mainly just loud rap music. Okkie [Okera Simmonds] is in charge - I don’t get involved! Most of us have the same songs anyway, mine and Okkie’s playlists are basically the same, so I don’t waste my battery on my phone!”