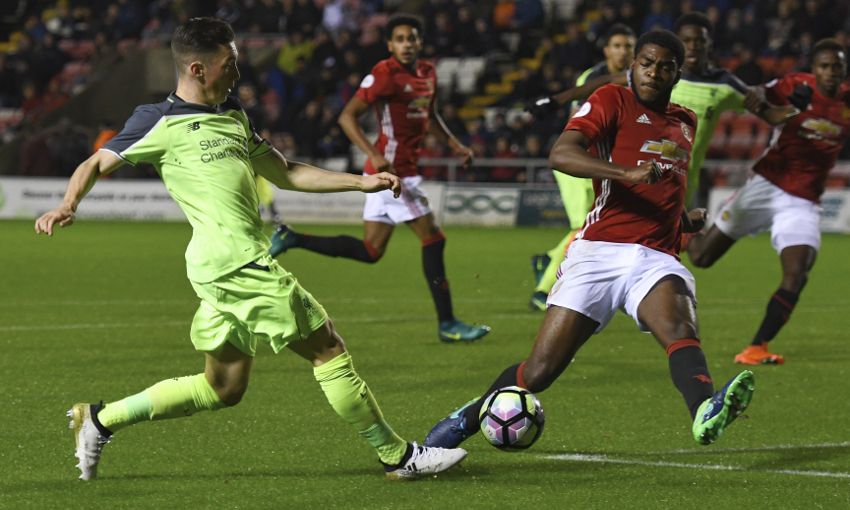 Liverpool U23s were held to a 1-1 draw by their Manchester United counterparts in an entertaining Premier League 2 clash at Leigh Sports Village on Tuesday night.

An audacious finish by Harry Wilson had his team in front at the break, only for Josh Harrop to restore parity from the penalty spot early in the second half.

The result brought an end to the young Reds’ winning run in the division, but did so despite long spells of dominance and a number of chances to claim three points.

As well as the first-team quality of Danny Ings and Mamadou Sakho, U23s boss Michael Beale was able to call upon the services of summer signing Marko Grujic in fielding a formidable line-up.

It was the hosts who went close first, though, when Matthew Willock curled an effort narrowly wide of the right post from the edge of the area in the sixth minute.

Liverpool responded well and industrious work by Ings on the right flank presented Wilson with a chance to scamper into space inside the United penalty box.

The Welshman looked up and rolled the ball across the area to a waiting Grujic at the back post – but the midfielder was thwarted by Sadiq El Fitouri before he could convert.

Trent Alexander-Arnold, impressive again from right-back, swung in a deep cross that Ings nodded onto the post yards out, and Connor Randall’s follow-up was blocked.

But, in came Pedro Chirivella and his low shot was intelligently diverted with a flick from Wilson that deceived the goalkeeper – moving in the opposite direction – and put Liverpool ahead.

Tiago Ilori almost doubled the lead with a header which was saved, while Devonte Redmond crashed a drive against the crossbar at the other end as the contest warmed up nicely at the halfway point.

United’s resurgence continued into the second period and they levelled the score at 1-1 within five minutes of the teams returning from the interval.

A lengthy dribble by Scott McTominay drew a Chirivella challenge inside the area that the referee judged to be a foul, and Harrop stepped up to send the penalty low past the reach of Kamil Grabara.

Kevin Stewart skimmed a good effort just wide as Liverpool composed themselves – and they did steadily begin to assert control in their quest to re-take the lead.

An excellent dribble at speed down the left allowed Randall to fire a superb cross into the middle in search of Ings, who could not quite connect with his head.

The striker should have netted on 73 minutes when Chirivella expertly found his run off the left flank and he burst clear, but United ‘keeper Sam Johnstone stood up and blocked the shot.

Grujic rued a missed header after being left unmarked to meet a free-kick into the box, Stewart miscued a late chance from a Sakho knockdown and Ings was denied again by Johnstone in the third minute of stoppage-time – meaning Beale’s team were forced to settle for a point.