Liverpool FC Women manager Vicky Jepson has detailed the work going on behind the scenes to keep her squad ticking over following the implementation of social distancing government guidelines.

In an exclusive chat with Liverpoolfc.com, Jepson spoke about the importance of keeping in regular contact with the players and staff via various social media and online apps.

Jepson was also keen to highlight the work LFC Foundation and the Red Neighbours team are doing in the community as well as proclaiming her admiration for the efforts of the NHS and key workers during the COVID-19 pandemic.

Read on below for the full interview...

First of all Vicky, how are you, the staff and the players during these sad and uncertain times?

We are just keeping ourselves occupied, staying safe indoors, which is important we all do, but we’ve got to look after each other as well while we are away from the training ground. We’ve had plenty of Zoom calls, we have regular staff meetings, there has been some fun quizzes that the staff have run for the girls to keep involved in on Zoom. It’s just important that the girls keep on top of their physical performance plan, the staff keep checking on the players regularly but more importantly that we stay inside until it’s safe to go back out again.

The Liverpool FC Women’s team last played on February 23 – that must feel like an eternity ago at this moment in time...

It wasn’t a game we want to remember either unfortunately but since then we were training really hard so we had a great response and we were looking forward to our next game. But obviously this has happened, which is an uncontrollable factor, but we’ve just got to make sure the priority is everybody is well, safe and that we are doing the best we can in isolation to keep on top of our focus for when we do return.

It’s the same for everybody who has got the love and the passion for football. Everybody is missing it but it’s just so important that we all stay in. The only way we are going to beat this is if we do stick to the game plan, stay in, make sure we stay isolated and if we do have to go out to get essentials then we do the right things to make sure that we don’t put others at risk.

I know how much of a football fanatic you are as a person, how difficult is it for you, especially with the added addition of a whole backroom staff and squad who rely on you massively?

I also rely on them as well to keep me ticking. It’s not just about me, it’s about the team. The team behind the team and the players as well. They often put smiles on my face when I have to sit through their music quizzes and all sorts of things that we’ve been doing as a group. But as a staffing group, especially my technical team, we have still been focusing and putting profiles together of our remaining eight fixtures. So we don’t really want to lose sight of that because when we do return it’s important that we have still not lost sight of our focus, to make sure that we still remain in the Women’s Super League, so that’s been a focus weekly with our technical team.

Our medical team have been working so hard to make sure that the players have got everything that they need – from sending Vitamin C tablets out to their houses, keeping in touch with them every morning on their morning monitoring to make sure they are sleeping and eating and they feel OK in their home surroundings. Their physical performance plan is probably the main important part for our players and is probably the one focus that they have every day, to make sure they keep on top of their fitness for when we do return. Everybody is working so hard behind the scenes with what little resources we have being stuck in our homes, but it’s important the team morale stays high as well, so there’s lots of banter going on amongst the team and amongst the staff.

Just tell us how you are going about things on a day-to-day basis with the squad and the training programme you can implement?

The training programme has changed a few times with information from the government and from the league, so as a staffing group we have to be on our toes and be adaptable the second we get new communications. We have to make sure that we are doing all we can and we are across all communications to make sure the players are in the best physical place as possible, so we have regular communications as a staffing group on that to make sure we get the programmes out to the players. We’ve sent resistant bands out to the players, skipping ropes and exercise bikes. They are all doing lots of running on an app called Strava so we can monitor how far they run, how quick they run. We’ve done live yoga sessions with our physio, Hina Chauhan, which has been great for the players to join in. I’m not very good and flexible at that but I still give it a little bit of a go! In our staffing group we play quizzes together and all sorts of things like that to keep us smiling and keep us ticking.

😁 @sophiebradley2 and @christiemurray7 get grilled by a local girls' team on a number of topics including karaoke,… https://t.co/1ZJjgf6SAI

For me, it’s so important to keep in a routine – going to bed not too late and not staying on Netflix until the early hours of the morning. I’m going to bed at a decent time, getting up, answering my emails. Myself and my assistant Emma Humphries, we take a group of players each that we call once a week. So I’ll phone half of the players and Emma will phone the other half and then we’ll change just so we are communicating with the girls on a personal level. We have the group catch-ups on Zoom which has been good for team morale and keeping everybody connected together as much as we can.

In terms of your preparation, does the mindset have to be prepared for when football does return, even if that might be at short notice during this uncertain time?

It’s something that we can’t control so we can’t get emotional or stressed about it, we’ve just got to make sure we are all together in this moment. The main thing that we keep stressing and we should keep stressing is that everybody stays in, stays isolated and if they are feeling stressed at any point they do reach out and we give them the support that they need to help them through this tough time. 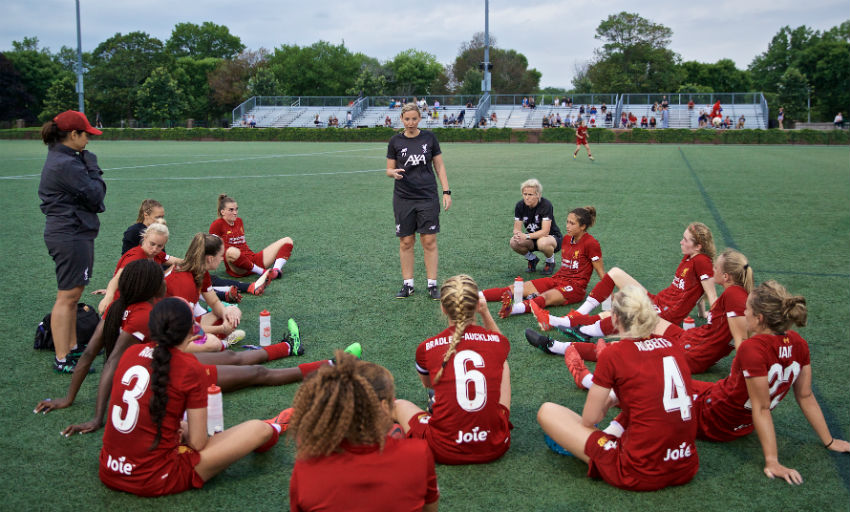 For someone like your goalkeeper Rylee Foster, who only signed in January having come from Canada, experiencing something like this in a new country must be especially tough. How do you keep their spirits up?

It’s tough. We can’t forget that she is only young as well, so it’s a good job she is a mature character in the group. Myself, Emma and the other staff have communicated with Rylee. She hasn’t flown home as well, so she has stayed in the city and she is keeping herself occupied. I think everybody is in the same boat with that in terms of being stuck in and not being able to be on the grass and joining in group sessions, so we’ve just got to make the most of what we have got around us and keep going. It’s just important that we stay in touch with the players as much as we can.

In terms of ourselves, LFC Foundation and Red Neighbours are still doing everything they can to support the community, something which you were very much a part of in your previous role…

The LFC Foundation have always done fantastic work across the community of Liverpool, but what they are doing right now is brilliant with the foodbanks. I’ve been keeping up to date with what they are doing on their social media channels. Matt Parish has done a really fantastic job with the LFC team and with the Red Neighbours also. It’s incredible the work they are doing across the L4 postcode and further afield. They are incredible and it just shows how great our LFC family is with the work that they do in helping underprivileged people to make sure those people can still have smiles on their faces, no matter what they’ve got at home.

How big is your admiration for those people who cannot stay at home and who are still out there working?

The key workers are such an important part of our country. The NHS workers in particular, how they get up every day and go out and save lives, doing long-hour shifts, putting themselves at risk as well – I think that they are the true heroes. I know we have so many incredible role models at our club but I think that the real role models right now are those that are still working and getting up every day and putting in those long hours to look after others that seriously need it. So I take my hat off to all of those key workers and everybody at our club, I know, are extremely grateful for all the hard work and the bravery that they do. It is inspirational and it’s inspirational to see them being brave and not backing out of being out there on the frontline to help others and save others. It’s incredible and something that’s extremely inspiring for us all.

Finally, what would be your message to the Liverpool FC Women supporters?

My main message is make sure you are staying in. The only way we are going to beat this is if we stick to the government advice. We are all doing it and I know it’s difficult but it has to be done. It’s the only way we can return back to football and that is for the people to listen to the key advice the government are giving us. So stay indoors, stay safe, don’t put others at risk, look after yourselves and hopefully we will be back playing soon because that’s what we want. Ultimately, everybody wants football to return so that we can all enjoy the sport that we love so much.