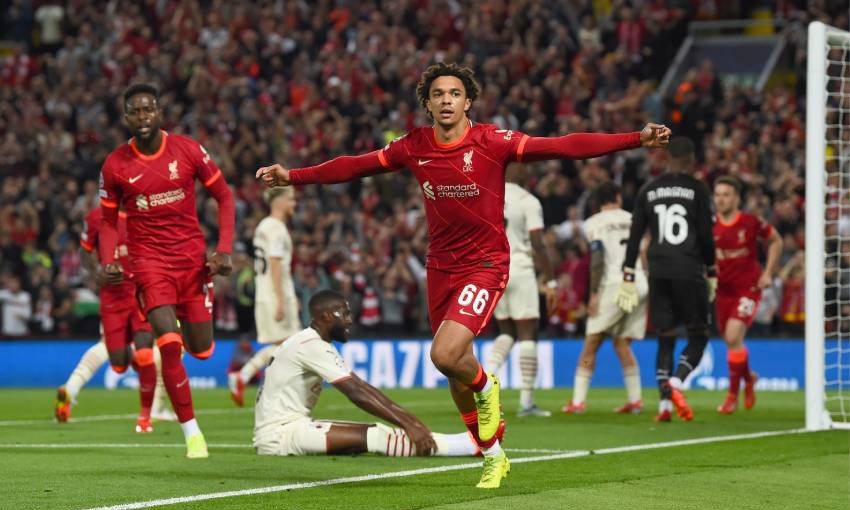 Trent Alexander-Arnold was happy Liverpool emerged from a ‘wild’ night of Champions League action on Wednesday with three points in hand.

The Reds opened their European campaign with a pulsating 3-2 victory over AC Milan at Anfield, courtesy of Jordan Henderson’s stunning, match-winning strike in the 69th minute.

Alexander-Arnold helped kick-start the evening’s antics, with his cross deflected into the net by Fikayo Tomori, before Milan responded with two goals in as many minutes to take a 2-1 lead into half-time.

Mohamed Salah equalised early on in the second period to set the stage for the skipper’s winner, and when asked to sum up the contest, Alexander-Arnold told Liverpoolfc.com: “Wild really!

“It was a good game, that’s what you expect when you play Champions League football – two really good sides, it was difficult to really put the game to bed in the end.

“The way we started the first half was incredible, we put them under a lot of pressure and they didn’t really know what hit them. We tailed off towards the end of the first half but managed to get the win. Some good goals, obviously Hendo with an amazing strike to get us the win and we saw it out.

“It’s difficult when games go like that. You switch off for two or three minutes and you get punished. But it’s an elite competition, so you expect that.

"We can’t let that happen again, otherwise we’ll be punished like we were today. We were able to get the win and that’s all that matters really.”

The victory, coupled with Atletico Madrid and FC Porto playing at a goalless draw, sees the Reds top Group B after the first round of fixtures.

“It’s a tough group,” the No.66 added. “When all four teams were drawn out, everyone was looking at this group as probably being one of the hardest all round.

“There’s no easy game or any givens in there. It’s going to be tough, you’ve got to earn every point you get. We’ve done well to get the three points.”

Jürgen Klopp handed starting berths to Joe Gomez and Divock Origi for the meeting with I Rossoneri – their first of the 2021-22 campaign.

With Liverpool now juggling multiple competitions, Alexander-Arnold stressed how every player in the first-team squad is going to be called upon in the coming months.

He finished: “That’s how the season is going to go. You come back from the first international break and it’s straight into three games a week, a game every three days.

“So you’re going to need the full squad, 25 lads. It’s not going to be the same XI that wins you every single game, there’s going to be changes in there and rotation.

“We have to be ready for that and I think the lads that came in today were definitely ready.”