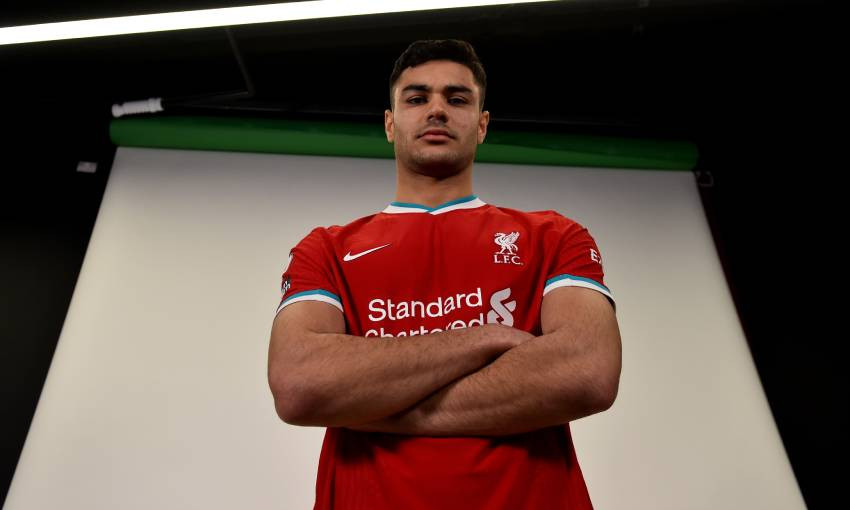 Barely 21 years of age, Ozan Kabak has been around the proverbial footballing block.

Playing Champions League football at 18, the need to win every week, moving to a new country and a relegation battle – Kabak handled each of those pressures before his arrival at Liverpool.

And all that experience proved vital when the Reds acquired his services on loan from Schalke 04 on transfer deadline day in February.

Kabak's adaptation period on Merseyside was a grand total of one match before he was then brought into the backline partway through a unique, testing season. It was sink or swim.

"Yeah, I'm quite experienced," the Turkey international told Liverpoolfc.com during a recent chat. "Champions League, Bundesliga and then Premier League, I had to grow up quick.

"At that age, 18 years old, playing in the Champions League and for Galatasaray – like Liverpool – we had to win every game. There's a lot of fans and you need to make them happy every week. They expect a lot from you, so this makes you an adult much quicker. That's exactly what I did at the time.

"For a young lad, I've benefited a lot because obviously playing games helps you to settle into new places or a new league.

"That's why I think adaptation was not that hard for me. I mean, I settled in easier than someone else maybe would."

Granted, Kabak's debut for Liverpool away at Leicester City ended up being one to forget.

A miscommunication between him and Alisson Becker saw Leicester take the lead and, ultimately, win 3-1.

"Until the 75th minute everything went well," Kabak now reflects. "Unfortunate things, it's football and that can happen. It happened.

"That's exactly what I did – I forgot the moment and I try to give my best in this game and after this game.

"But, to be honest, I felt really, really sad. But my teammates, manager, everyone supported me and I appreciated it.

"It was not easy, of course. I came directly into the team and I needed to give something to the team and to help the team. At the same time, I need to get used to the city and the language – everything was new.

"For a [then] 20-year-old lad, it's not easy but I think I did a good job and I just concentrate on football."

After the Leicester game, Kabak went on to display 'really promising' form in the eyes of Jürgen Klopp. The 'amazing talent' – a label subsequently used by his manager – helped the team record five clean sheets from his next seven starts.

Former Liverpool stalwart Jamie Carragher praised and highlighted the No.19's innate sense of danger during a win at Wolverhampton Wanderers, a seemingly rare trait for a player so young.

On that ability, Kabak notes: "As a defender, I think you need to smell the danger and you need to see it before it happens.

"I don't know how it's called in English but you need to guess where's the danger and you need to go there and cover. You need to be intelligent. That's exactly what I'm trying to do but it's about experience, too, I think.

"Our friend Virgil [van Dijk], for example, is so good at this job. He does it very well because he's a really experienced guy and he knows this football. So I tried to do my best and game by game I think I got better on this.

Kabak also takes on invaluable advice from the club's analysis department and Van Dijk himself.

"I analyse every striker before the game with the video analysis. I ask the guys who work in here [for] their videos and I work on it.

"Before the game I know which foot is stronger and what the abilities are of this striker. It helps me a lot because then it's easier to guess his next movements."

To help him start fresh and alert on the pitch, Kabak detaches from football entirely when away from the training ground.

In the pre-pandemic world he enjoyed trips to the cinema and restaurants with family and friends. Although currently limited to TV and books, he considers any pleasure that helps him switch off to be essential.

He explains: "We don't speak football at our home with parents or with friends. Just maybe after the game we talk for two, three minutes. That's all. I say, 'Let's switch off and talk about other things.'

"Our life is not just football. We're always in the dressing room talking about football and we train every day. I think when we go home we need to relax and we need to think and talk about other things in life. It makes us much more relaxed when I come here."

Internationals: Kabak and Konate in action on Monday