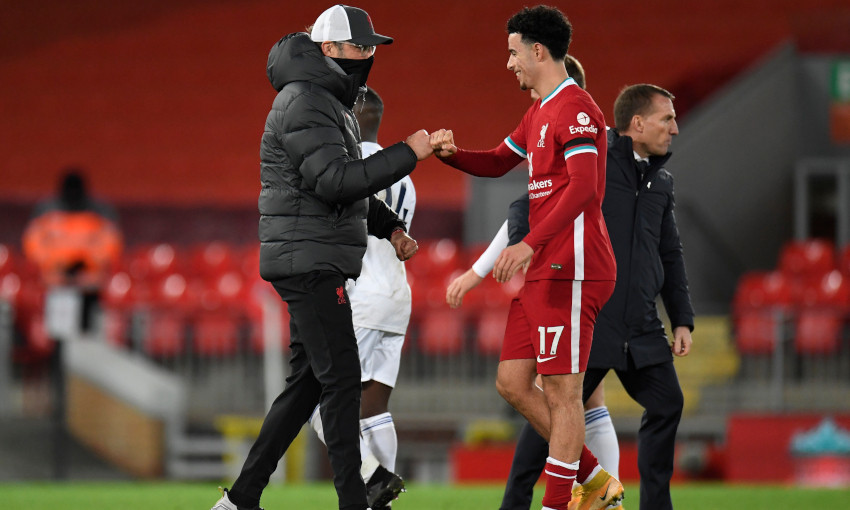 Curtis Jones has underlined the impact the faith shown in him by Jürgen Klopp and his backroom team has had in enabling him to demonstrate his talents regularly at first-team level.

Indeed, Jones has begun the Reds’ last two outings against Leicester City and Atalanta BC, emphasising the belief in his ability and maturity from the manager and his staff.

“Especially in the team I’m playing in, the depth of the squad is big… there are a lot of players unavailable but for him and his staff to have the trust in me to put me out there on such a big level at such a young age is massive for me,” the No.17 told Premier League Productions.

“It’s definitely a positive. I can’t wait to get a few more appearances hopefully.

“I’ve always said that regardless of when I’m called upon, in any sort of game for however long he puts me on for, I’ll always give 100 per cent. I think that has paid off and now I’ve started to get rewarded with starting and stuff.

“It’s even bigger [determination] and I have to repay him even more now. So, any time I’m on the pitch I’m giving 100 per cent. I’m working my absolute hardest. Hopefully I can top it off with a few goals in the season or a few assists.”

The England U21 international will be hoping to add more minutes to his tally when Liverpool tackle Brighton & Hove Albion at the Amex Stadium this lunchtime.

Former Reds playmaker Adam Lallana is among the Seagulls’ ranks and Jones is in no doubt about the sternness of the challenge Graham Potter’s men will pose.

“Very difficult,” Jones stated. “Any team you come across in the Premier League, it’s always a difficult game.

“Especially being a young lad and I could have a chance of being in the team, I know it’ll be difficult for me on a personal note. But for the whole team, there has been a few injuries and stuff so the team will change, of course.

“They’re on the back of a great win against Villa and they have got some great players in the team that I know well.”