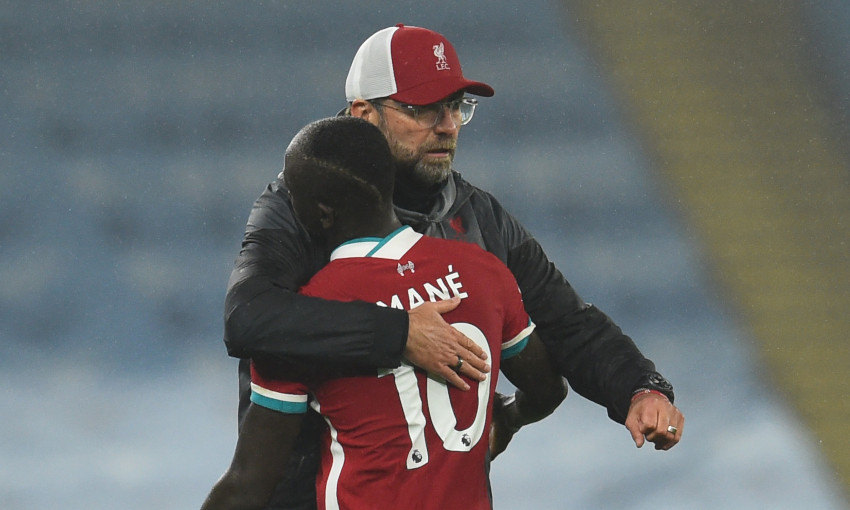 Jürgen Klopp was satisfied with a point from a 'proper, proper fight' against Manchester City in Sunday's 1-1 draw at Etihad Stadium.

The Reds’ adventurous start to the contest was rewarded when Mohamed Salah lashed in a 13th-minute penalty after Kyle Walker had brought Sadio Mane down.

Pep Guardiola’s side levelled the Premier League clash, however, via Gabriel Jesus’ turn-and-finish inside the area just after the half-hour mark.

City then had the opportunity to go in front before the break when Joe Gomez was deemed to have handled, only for Kevin De Bruyne to roll the subsequent spot-kick wide of the post.

The champions were required to dig deep in the final stages of the encounter as the hosts pressed for a winner, but they stood firm to collect a share of the spoils.

No, I actually liked the whole game but you are right, the start was probably the best period of the game. That’s how football is. You have to – especially against City – use your chances or create even more. We had really top situations, top football moments, but for the football we played in that period, we didn’t have enough 100 per cent [chances], let me say it like this. But that’s normal and nothing I’m too concerned about because you just have to stay in the game. We scored our goal and then we were not that compact anymore for, I think, around 10 minutes or so and immediately the difference-maker, Kevin De Bruyne, is then between the lines, turns, goes in the box, they score the goal. Then they get the penalty.

Apart from that, usually when we play City we sit here in the press conference and I have to say: ‘Yeah, here we were slightly lucky, here Ali had to make a world-class save.’ They usually have more clear-cut chances, today they hadn’t and that’s a compliment to my boys. We respect them a lot. I loved the energy level of both teams tonight – it was a proper, proper fight on the highest level. That means you deny the opponent, with the quality we have and the quality they have. You deny the opponent in a lot of moments. So, I’m really happy with the result and the performance. 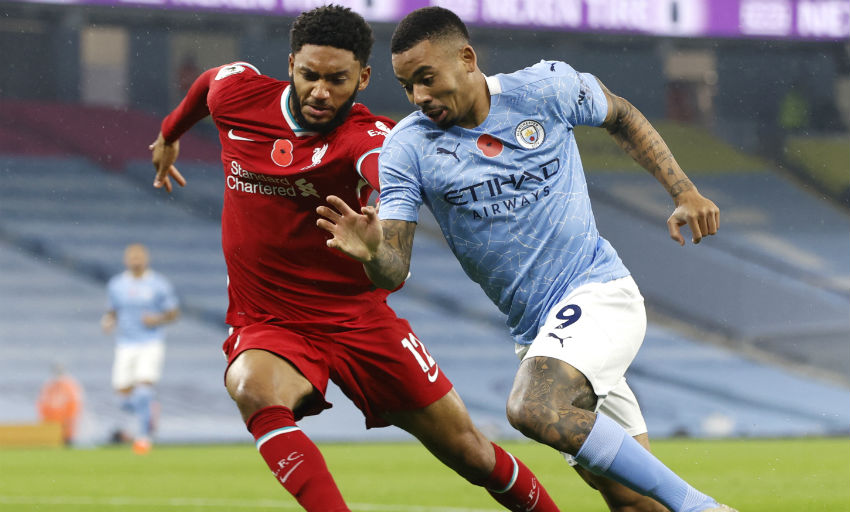 I cannot speak about it because I didn’t see it yet. I don’t think it’s now too important but everybody is talking about it. It looked and it sounds to me that it’s obviously not 100 per cent clear in that moment. But I can’t say anything about it because I didn’t see it back. I saw only Joe’s back in that moment when the ball hit him, it could have been anywhere, I couldn’t see that in the game so I cannot say anything about it. Yeah… handball, offside, armpit, all these kind of things – I don’t know why we constantly talk about it and not people who can really make a difference talk about it much more. They might do it and are the only people in the world who think it’s exactly right like it is, and only us are the ones who think it’s not right like it is. I can’t say anything about this specific handball situation but I saw yesterday the [Patrick] Bamford armpit and it reminded me a lot of the Bobby Firmino armpit at Aston Villa [last season]. I can’t wait for the first time a player scores a goal with the armpit – I don’t know how that works but I can’t wait.

On the scheduling of matches in the division…

I spoke roundabout two weeks ago, the club organised for me a meeting with [the Premier League and they told me] we cannot change it because it’s not about Man United, it’s not about Liverpool, it’s not about City. Let me say it like this. We played after the last international break at 12.30 at Everton. My players were Wednesday night, some of them, at Peru. Then you play at 12.30. These kind of things should not happen. I understand 100 per cent the need of television, 100 per cent. But the Premier League needs to fulfil more the position of the unity of the players as well. Everything changed apart from the fixture list. Usually in a season we all have an October, November and then a very, very tricky December. This year, the October is like the December, the November is like the December and the December is still like the December. This intensity is really difficult. It’s completely normal that you play Saturday, it’s the 12.30 which is the killer.

Tottenham played at Ludogorets on Thursday night and played today at 12. With all respect to West Brom, but Tottenham won it late because you need then much longer and all that stuff. People might like it and think, ‘OK, that’s a proper competition, it gives other teams a chance.’ The only problem is we injure the players. We cannot keep the players fit with that. That’s really the problem. It’s not about us, it’s about the fixtures. We have to talk again about the five subs. If still, I don’t know, 14 teams say – I’m not sure they will say – that five subs shouldn’t happen, then at least let us sub five times when we play each other, the top six against each other. I have no idea if that is possible but we have to find solutions because it’s so tough this year. We get it, we want to play football 100 per cent with all we have – we need to play football, it’s great for the people, it’s great for us, everything is fine. But Wednesday night and 12.30 should not be allowed.

Ole [Gunnar Solskjaer] was right. City and us played on Tuesday, so there are always two teams who play Tuesday and two teams who play Wednesday. If the Tuesday teams are in contention now for the Saturday 12-whatever, that’s OK. It’s not nice but it’s OK. But the Wednesday teams should not even be in consideration for that game, just not. Sky, BT, Premier League, BBC, whoever – they have to talk. We cannot deal with that situation like we always did before. It’s very important the FA has to be involved. Tonight we lost Trent Alexander-Arnold and I’m pretty sure Gareth Southgate is not fine [with that]. If we continue like this and hopefully we can play a Euros in the summer, if they happen, let’s see who will be part of that, which players. Everybody needs to go on the table. It’s fine we found the solution to play on, that’s great, but now we cannot stop thinking. We have to start thinking new.

On fielding Roberto Firmino, Diogo Jota, Mane and Salah in the starting XI, and whether it was a specific tactic for facing City…

When you can do it against City then you can do it against other teams as well. It will not be our new, all-the-time [formation] but there are moments when we might use it. That’s very helpful for us. Usually people know which system we play, that’s now water under the bridge. From now on we can play three or four different systems, which is good, and tonight it worked really well. We wanted to use the skills and the power of the four up front in specific moments to cause City problems, that’s one thing. The other thing is that we all like to prepare a game in the way that we know exactly what the opponent is doing and Pep, I don’t think he knew we would play 4-4-2. It’s not important but it needed a while for City to adapt to it, that was the plan for today. We will not have used that the last time.