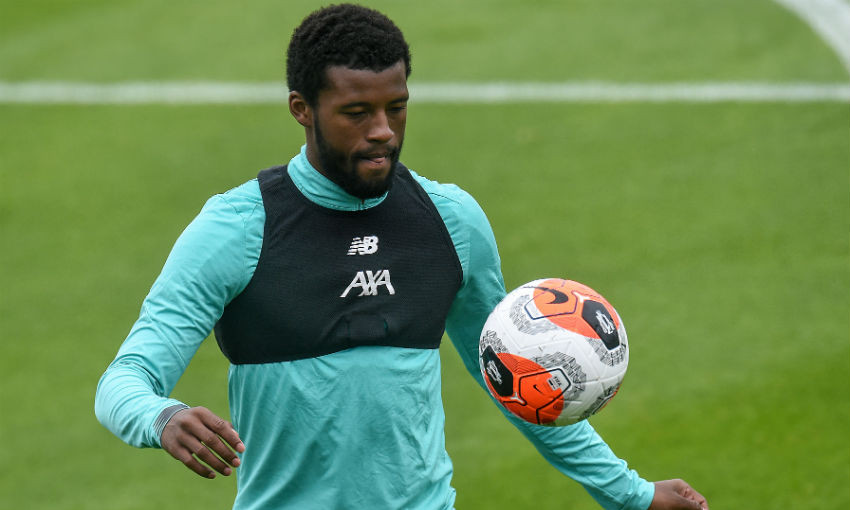 The absence of supporters inside stadiums for the remainder of the 2019-20 Premier League season requires Liverpool's players to push each other even more now, Georginio Wijnaldum insists.

The Reds' final nine fixtures of the campaign will be played behind closed doors due to the COVID-19 pandemic.

That sequence starts with the 236th Merseyside derby this evening as Everton host the league leaders at Goodison Park.

Asked about playing without a backdrop of noise and passion from the stands, Wijnaldum told Liverpoolfc.com: "Now we have to help each other even more as players.

"Normally, we also have the crowd, who give us an extra boost and let us go again, give us confidence and everything. We don’t have that now, so we have to help each other extra in this time and have to do it together.

"We know it’s not possible for the crowd to come, so we already dealt with that situation in the games we played. It’s still strange, but we have to deal with it.

"Until now it went well but of course it’s going to be a big miss for us, especially for us because everyone knows the supporters we have and how important they are for us. Now we have to do it without them."

The midfielder added: “I think everyone is really happy now. It was a difficult time for everyone.

“First of all, you had to stay home, it was difficult. But [also] not to play football. Basically the daily routine we had – come to training, train with each other and play games – we didn’t have it for months right now. We were already happy when we could train at the training ground again, train with each other.

“Now you can play competitive games again, so it’s a really good feeling for all of us. I don’t think it’s only good for us as players but also for the people around the world, because everyone wants to watch football. So I think it’s a good time for everyone.”

Jürgen Klopp's side head into the encounter with their local rivals knowing they are just two victories away from sealing the league title.

Returning after a three-month pause, Wijnaldum insists Liverpool's focus in this moment remains exactly the same as it was when the season began at home to Norwich City on August 9.

The No.5 said: "That’s what we tried to do the whole season, just trying to win games and at the end of the season we hope we will stand there with the prize. It’s coming really close right now.

"I have to say, the sessions we had together on the internet helped the guys basically to stay calm, because we had a lot of conversations – also with the manager. They were making sure we were not disrupted basically this season, with the results we had and everything.

"We were more busy with staying fit for when we come together and train. The concern from the players was more like when we can play football again, when we go back to the training ground, when we can train together and basically have the daily routine back."