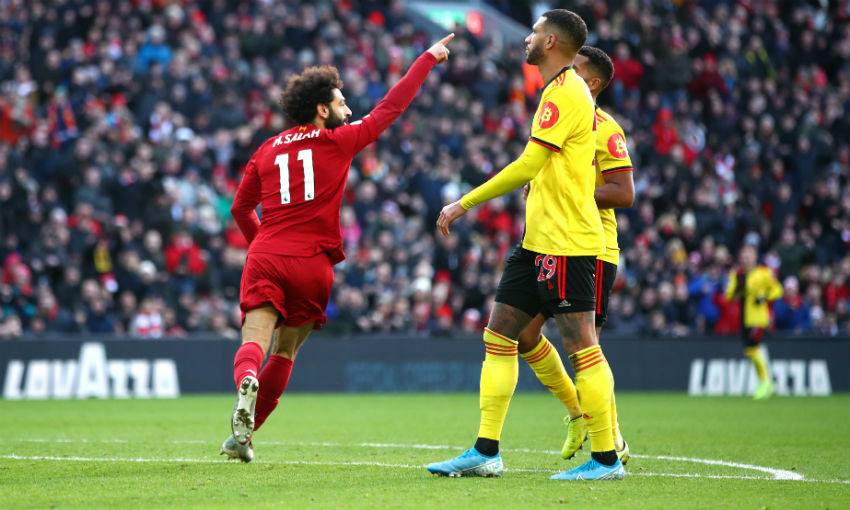 Mohamed Salah revealed practice on the training pitches at Melwood contributed to his stunning opener in Saturday's hard-fought 2-0 victory over Watford.

The Reds claimed another three points in the Premier League as Salah netted two exquisite goals at Anfield.

The Egyptian opened the scoring close to half-time by brilliantly curling into the far corner with his so-called weaker foot before then adding the second with an impressive backheel in the final minute of the 90.

Speaking to BT Sport post-match, the No.11 said: "I'm practising my right foot! I had good luck in the first goal.

"It was a counter-attack, Sadio played a good ball and I think I score in the right time.

"We played against a tough team today. I think they should be [in a] better position than what they are. Hopefully we keep winning."

On Liverpool's display, Salah added: "I think now we have more experience, we play together for three or four years.

"We know when we can make the game calm, when we make it fast. Sometimes the crowd get panicked a little bit but we have experience.

Liverpool were made to work hard for the victory, with 20th-place Watford creating a number of goalscoring opportunities throughout the match.

James Milner admitted it wasn't the prettiest of performances from Jürgen Klopp's side, but stressed the result is the only thing that matters at this stage of the season.

"Sometimes you've just got to scrap it out, it can't always be nice and pretty football," the vice-captain said.

"But that's an important result today to get those three points in the way we did, battling it out. Then obviously with what's coming up it was a big time to get the three points.

"Keep recovering, concentrate on the next game and prepare and go again. This team is so good at that, really good mentality.

"It's not easy but that's the price of being successful. We want to win every game and keep pushing.

"You can see the quality in the squad because changes are being made all the time and that's what we need to do."