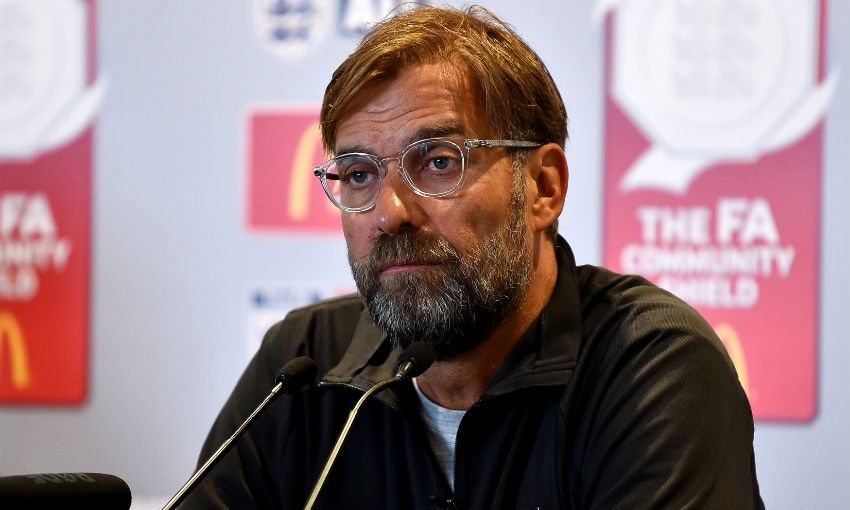 Jürgen Klopp has acknowledged the need for improvement from Liverpool ahead of the FA Community Shield clash with Manchester City.

The boss, though, does not think his side’s season will be defined by the outcome of Sunday’s match at Wembley.

Last term’s top two in the Premier League will meet this weekend for the game that traditionally marks the beginning of the English campaign.

Prior to coming up against Pep Guardiola’s side, the Reds will complete a training camp in Evian and face Lyon in their final pre-season friendly in Geneva on Wednesday, with Klopp set to welcome a quintet of first-team players back into his squad on Monday.

The manager described the stay in the south of France as ‘the most important week of the pre-season’ during his pre-Community Shield press conference, and outlined his intentions with regard to preparing for City.

“A lot more than we saw yesterday [in the defeat to Napoli], of course,” Klopp said, when asked if an upswing in performance is required versus Sunday’s opponents.

“I think apart from Aguero they are pretty much all in so that means it’s a different situation. Last year, as it will be this year, it’s the most difficult game you play during the season.

“We didn’t defend counter-attacks too well yesterday, we lost the ball in the wrong moments and were not protected and stuff like that. If that would happen against City you don’t have a chance, but we know each other good enough and long enough now to know that it will be different next Sunday.

“But for this we have to talk a few talks and we have a few training sessions for sure. It’s not about intensity anymore, we had to do intense sessions in the first three weeks then we played the games in difficult circumstances and now we are here.

“How I said, going to Evian, it was always clear it will be the most important week of the pre-season.

“After City we have another five days to prepare for Norwich, which is exactly as important as the City game, and then Chelsea. So it’s a different start but it’s our start, so we take it and it’s all good.”

Klopp went on to dismiss the notion that beating City, who accrued one more point than Liverpool’s 97 to win the Premier League last season, would be a ‘statement’ before 2019-20.

“I don’t want to find excuses before we play them but we had a completely different pre-season. We played the pre-season without six players so I cannot sit here and say ‘that must be the statement for us’, that would be completely mad,” the boss stated.

“But we had the best pre-season of our lives? I cannot say that and you see that in the results. But the sessions were good, really good. The games then, from a freshness point of view, came in the wrong moment but we cannot change that [and] we have to do what we have to do.

“The only problem is we do all the games in public and everybody sees what we are doing. Some people have concerns, some people don’t.

“It’s all OK, we have to prove ourselves during the season and not in one game and if I would say this must be the statement for the season then I would be really a bit mad.

“It has nothing to do, for me, with the rest of the season. It’s a game and if we had only eight players available, for example, I would like to try to win it. It’s a final, it’s the first time that I realised that nobody sees it like that, to be honest: a ‘curtain-raiser’, it’s unbelievable!

“We think constantly about the game and how can we prepare it and people say ‘Oh, do they really play?!’ That’s not too cool but it’s how it is and we cannot change that as well.

“So then we have another five days [before Norwich]. We cannot risk players or whatever, we have to see who we can line up and who will train and who will play, but of course we have to make sure we have a line-up that gives us an opportunity to win the game and that’s what we try.”