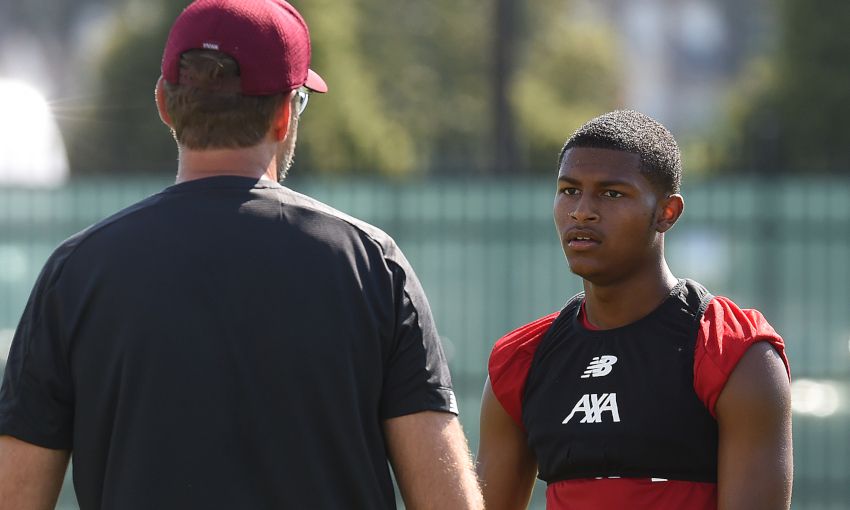 The 19-year-old was elevated into the Liverpool first-team squad after his recovery from long-term injury and hit the target three times in the two friendlies before the club’s pre-season tour of the United States began this week.

Klopp has spoken on several occasions already this summer about his hopes for the striker and firm belief that he has the ability to make an impact at senior level.

Those words have been gratefully received by Brewster – but the No.24 is wise enough to know only he can ensure his actions on the pitch speak louder.

“He has said it quite a few times now and I just want to repay his faith in me,” he told Liverpoolfc.com after Thursday’s open training session at Notre Dame University.

“It is alright him saying it but it is for me to go out there and do it. I’m looking forward to doing that.

“Of course it’s sad that Daniel [Sturridge] has gone but it’s a gap for me and hopefully I can fill his big boots. He’s not a bad player! Hopefully I can push on this season.”

Brewster struck with three instinctive finishes in the meetings with Tranmere Rovers and Bradford City to get his pre-season off to an eye-catching start.

But the England youth international understands the games against Borussia Dortmund, Sevilla and Sporting CP in America – and the conditions they will be played in – represent a sterner examination personally and collectively.

“I got two goals against Tranmere and a goal against Bradford but coming to the US we’ve got Dortmund, Sevilla and Sporting,” he added.

“It’s going to be a tough task but it will be good to get more minutes in this heat. Hopefully I can get a few more goals and push on.”

Brewster conducted his lengthy injury rehabilitation at Melwood, allowing him to integrate with Klopp’s squad before his opportunity on the pitch arrived.

The teenager is already a popular member of the group and he revealed how the players have been bonding during their downtime in the States.

“It’s good to not only know each other on the pitch but off the pitch as well,” he said.

“We interact – we play table tennis, we play pool, we play darts, we eat together. We watch Love Island together! It’s good to bond and I think that’s going to help us going into the season.”