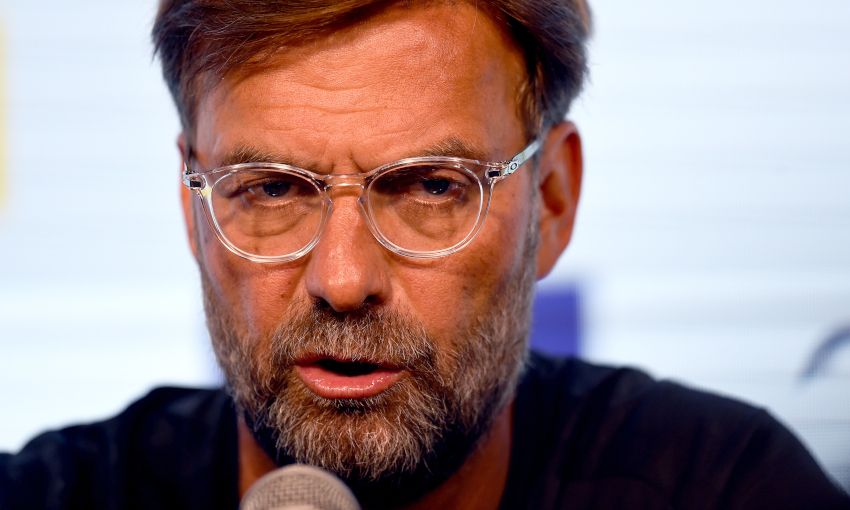 The European champions play the first game of their USA pre-season tour against the Bundesliga side – a fixture that will be shown live on LFCTV and LFCTV GO.

Having recorded comfortable victories at Tranmere Rovers and Bradford City before travelling to America, Klopp expects a much harder challenge as he juggles fitness considerations with a desire to keep winning.

“I’m excited about having the first proper test,” said the manager during a pre-match press conference at the Indiana venue on Thursday.

“A couple of the boys came later and we have to see how we use them tomorrow. It will probably be a rather young team will face a very good team; let’s guess Borussia Dortmund change the 60-30 rhythm for the players, then pretty much all the big guns will start tomorrow. And that will be a tough game.

“But how it always is in football, even in a pre-season game you play it and want to win it. Last year we tried the same [against Dortmund in pre-season] and it didn’t work out. It had not a massive influence.

“It’s always a pre-season game still but you can sometimes learn more from a defeat. I still hope we can learn a lot tomorrow from a good game.

“So far the boys played really well and how pre-season is, we always play them out of full training. So tonight will be a session that you usually don’t have when you play a football game 24 hours later.

“But we need the intensity for preparing for a whole season, so we cannot try to avoid high intensity before a game that is obviously a big one against a really strong side.”

The first group of players reported back for pre-season 12 days ago and were joined by several more in the week that followed, including Trent Alexander-Arnold, Jordan Henderson, Andy Robertson, Virgil van Dijk and Georginio Wijnaldum last Saturday.

Alisson Becker, Roberto Firmino and Mohamed Salah will bolster the squad further ahead of the training camp in Evian later this month, while Sadio Mane remains at the Africa Cup of Nations.

But balancing the different complexities of pre-season should not, and will not, stop Liverpool from searching for improvements on their achievements of last term.

“So far, so good but [there is] a lot of work to do,” said Klopp. “We played a specific level last year which should be the basis for what we expect from ourselves for next season. It’s not about results, it’s about performance and there is still space for improvement and that’s what we are working on. We know that.

“It’s a slightly different situation to last year; players coming back late, we had a shorter holiday than pretty much all the other teams because the Champions League final was three weeks after the season ended. So that’s the situation but we knew that, we planned that. It still makes it a bit more difficult than in other pre-seasons maybe, but that’s all.

“Apart from that, we prepare for a whole season not only for the first game of the season. That means we have to do the specific stuff, we have to play the games out of full training, as we do every year. That means there will be ups and downs in the games for sure but what we’re looking for is general improvement and development.

“We have to find solutions for different problems in the future. We have to make decisions now for who has which fitness level in the moment and can play 45, 60, 30 or even longer. They are the things we do. The boys are in good shape and were all happy when we saw each other again.”