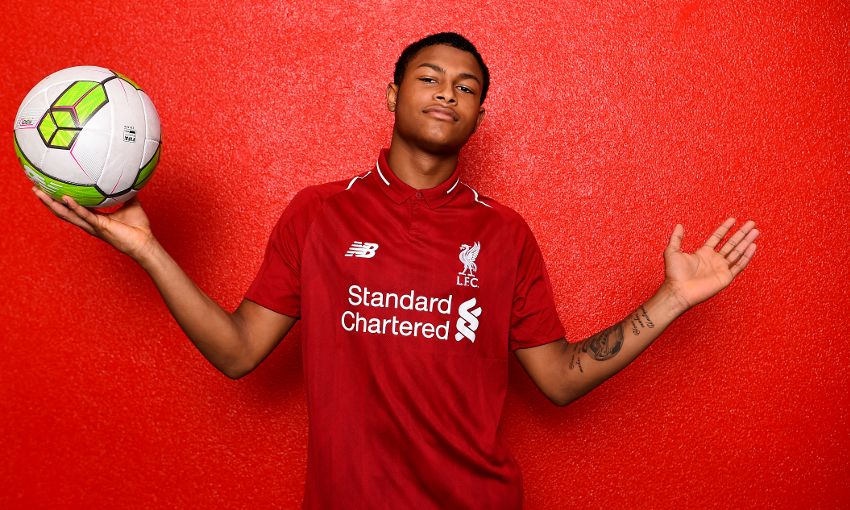 "I can't wait to get back," declared Rhian Brewster as the Liverpool striker gave an update on his long-term rehabilitation.

The 18-year-old has been sidelined since sustaining an ankle ligament injury in January but, having signed a new deal with the Reds during the summer, is maintaining a positive outlook on his future.

In a Q&A published in last weekend’s matchday programme, Brewster provided the latest details of his recovery, revealed why he took the No.24 shirt for the new season, and explained how he can learn from the likes of Roberto Firmino and Daniel Sturridge...

Firstly, how is your rehab going?

Really well. I’ve started to progress on the running side of things. I haven’t had any setbacks at the moment and, touch wood, it stays the same because I can’t wait to get back and try to get on the bench or maybe feature in a game. Hopefully, when I’m back I will get a few opportunities and I’ll take them, but I’m very happy with what I’m doing at the moment so hopefully the injury doesn’t flare up again. Even if it does set me back a little bit I’ve just got to keep going. I will be back soon.

How much has the manager spoken to you during your spell on the sidelines?

The manager makes a few jokes about me not having been on the pitch for so long! But it’s good to have a manager like that managing me because it does keep me happy. It would be easier for him to ignore me and think, ‘I’ll wait until Rhian gets fit’, and not really interact with me, but he has. He’s kept my morale high and I can’t thank him enough… well, I could if I score some goals for him! Seriously, I can’t thank the manager enough and also every single one of the players. They all talk to me every day, ask me how I am, when I’ll be back fit and stuff like that. It means a lot. I just can’t wait to be back and hopefully help the team go far in the Premier League and Champions League.

You were in the stands for the Carabao Cup tie against Chelsea – were you thinking that could have been the night when you got your chance?

There is always a ‘maybe’ but obviously you’ve got to fight for your space in the team here. If I was back fit then who knows? Maybe I’d have been on the bench or even playing, but at the moment I’m just trying to get fit again so I can get that opportunity to show the manager what I’m made of.

How mentally strong do you need to be during a long-term lay-off?

You need to be mentally on-point. With my injuries – especially being out for as long as I have been – I’ve gone through quite a lot: setbacks, things going through my head. To be fair, though, I think I’ve done exceptionally well for myself. People have told me that I have because, to be honest, I didn’t think that I would be where I am now eight-and-a-half months ago. I thought I would’ve lost my head by now, but I’ve been mentally strong. You’ve just got to work hard and keep going and I think I have.

You signed a new contract in July so it must have been frustrating not to be able to kick on straight after that?

When you sign a new deal you just want to show the fans why you’ve signed a new deal, but they’re going to have to wait a little bit to see that because I’m still injured. Like I was saying, I just want to push on when I get back and fight for my space in the team. 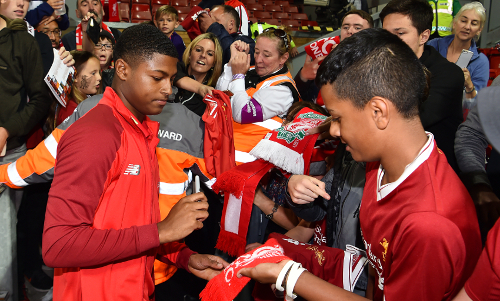 How much can you learn from your more experienced teammates when you’re watching them in big games from the stands?

I’ve got my own style but I always try to see what I can learn from other players, both good and bad. If I see something bad then I think to myself, I don’t want to be doing that, if you know what I mean. But I’m always learning good stuff from the lads, from Bobby Firmino, from Daniel Sturridge, from all of them. They’ve been there for a long time and they’ve been playing professional football for a long time so of course I’m going to learn from them. I’m still young. I’m only 18 and they’re both in their mid-to-late 20s but they’re still learning too, so maybe I can pick stuff up from them. For instance, Studge’s goal against Chelsea in the Carabao Cup was a great finish from a rebound and he hit the crossbar out of nowhere as well. I’m happy for Studge that he’s scoring goals because he deserves it. He’s been through his injuries and now that he’s back fit and playing, he looks better than ever. I just hope he keeps going and keeps scoring.

You switched squad numbers from 57 to 24 in the summer – any significance?

I asked to change my number and they gave me the options of which numbers I could have. I wanted 26, to be honest, because that means something to me, but Robbo already has that shirt so I went for 24 because it was one of the closest numbers available to it that I liked.

How important is it to see Trent Alexander-Arnold taking his chance in the first team?

Trent is only a school year older than me so he is still young and has still got a lot to learn, but I take some stuff off him because he has taken things in his stride. He took his chance well and he’s now a regular in the first team and hopefully will soon be a regular in the England set-up after going to the World Cup. I can take on board stuff from Trent because he is still level-headed, still humble and still makes jokes like we used to at the Academy. Now I need to take my opportunity when it comes.