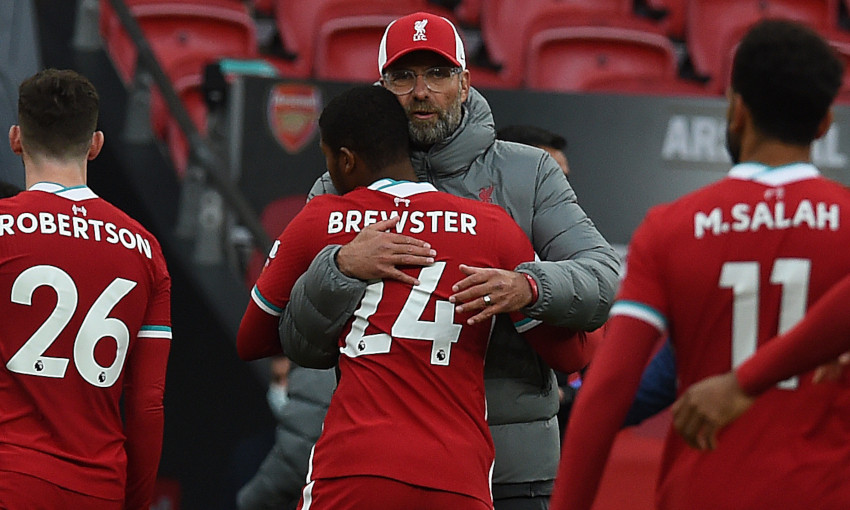 Jürgen Klopp detailed why Liverpool have no option but to be 100 per cent focused when they meet Sheffield United – and potentially Rhian Brewster – on Saturday.

The Reds switch back to Premier League action this weekend and return to Anfield to face a Blades side that have taken one point from their opening five Premier League games this season.

Brewster is in contention to make his first start for Chris Wilder’s charges having completed a move to Bramall Lane from Liverpool at the beginning of the month.

And Klopp’s appreciation and knowledge of both Brewster and his new team make the manager well aware of what is required from the champions this weekend.

“We all know him very well and that’s the problem – we know how good he is! That’s the situation,” he said of Brewster at his pre-match press conference.

“How always when a boy, especially like Rhian who is really our boy – OK, maybe I have to say ‘used to be our boy’ – but still, we feel that way, it means always I wish them really the nearly perfect Premier League season.

“That means – OK, he couldn’t have played 36 games, but if – then 36 world-class games and two days off pretty much and that’s always the games when we play them. And I hope for this day. But I’m not sure that will happen.

“So, we need to be 100 per cent focused if he starts. But not only him, come on. How I said, Sheffield United are doing really well and it’s not unlikely something like what happened to them now result-wise, they had a pretty tough start fixture-wise. It’s normal and I’m pretty sure Chris is calm enough to know all the good things they did are still good and they just have to keep them going. That’s what they will try and that makes it really a very intense game.

“It’s Sheffield United – the way they play, if you want to win the game you have to be intense yourself. And that’s it.

“And if Rhian is then on the pitch, we know we should not let him finish at all because wherever he gets the ball he is a natural finisher and that’s his biggest threat.”

Liverpool will be back on the pitch exactly 72 hours after facing AFC Ajax in the Champions League and clinching a 1-0 win in Amsterdam to start Group D.

Klopp explained why Friday’s session at Melwood is therefore especially important as he and his coaching team make adjustments for the changes in opposition style.

“And Sheffield United deserve a lot of attention for what they do because they are really good in that, even when the results were so far not exactly how they wished for. The performances were not that bad, I’m pretty sure Chris Wilder knows that and they will build on that. That makes it tricky for us.

“And they had a full week to prepare the game. With all the strength they have in set-pieces anyway, they had time for working on that as well. It will be a tough one for us, like it always was against Sheffield United.”