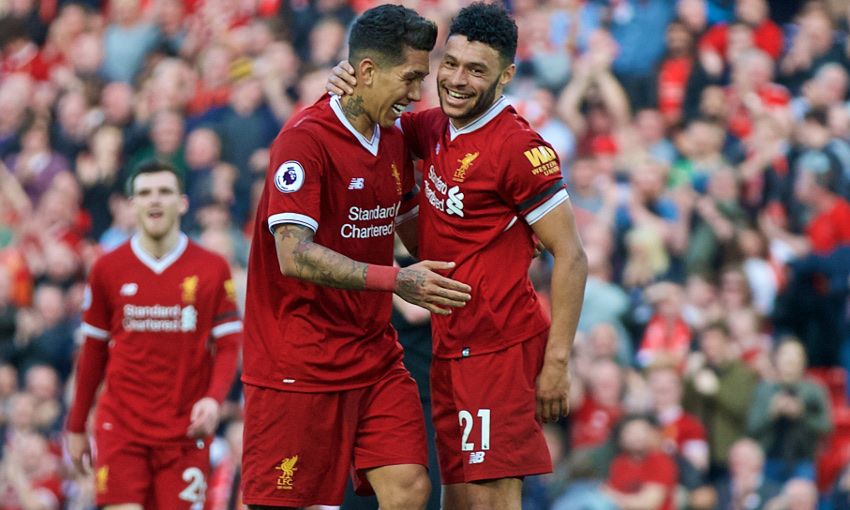 Alex Oxlade-Chamberlain highlighted Liverpool's hard work as crucial to creating the conditions for an 'enjoyable' afternoon at Anfield that saw Bournemouth beaten 3-0.

Jürgen Klopp's team dominated from start to finish on their return to Premier League action, scoring in the seventh minute through Sadio Mane and adding further strikes from Mohamed Salah and Roberto Firmino in the second period.

And Oxlade-Chamberlain, who was a key to the hosts' midfield control throughout, was particularly pleased with the focus and graft that provided the platform for the Reds to cap a fine week in style.

"It was enjoyable but I think because we made it that way for ourselves," he told Liverpoolfc.com.

"First half, we started off with good intensity, we were winning the ball back high, putting them under a lot of pressure, and we played some good stuff.

"At half-time, we came in and we had a few things we wanted to tighten up on to make sure that at 1-0 we didn't give them any openings to get back into the game.

"I think we did that well for the start of the second half and obviously we went 2-0 up and then maybe took our foot off the gas a little bit and they put us under a little bit more pressure at the end.

"But, overall, really good; another really mature performance I'd say off the back of an amazing week where maybe things can get distracted.

"The manager was 100 per cent making sure we weren't thinking about last week and were back to business as normal."

Despite the convincing nature of the final score, Eddie Howe's men more than played their part in the contest, putting Liverpool under pressure on a number of occasions.

But Oxlade-Chamberlain revealed that the memory of Bournemouth's come-from-behind win over the Reds that pre-dated his move to Anfield meant there was no chance of complacency.

He added: "You could see that even when maybe the game was gone for them at 3-0, they were still going forward and trying to put us under pressure and create.

"They've got good players in their team that can hurt us, I think we've seen that over the years - I remember even before I was at Liverpool, that game where Bournemouth came back [to win 4-3].

"So we knew that we had to make sure that we respected them right until the end and kept our levels high.

The Englishman also paid tribute to the scorer of the hosts' second, Salah, who made it 40 goals in all competitions with a deft header in the 69th minute.

He continued: "First and foremost, the ball from Trent was outstanding; another unbelievable performance from him again today.

"But the finish from Mo was a bit of an unusual one for him and one that maybe took everyone by surprise.

"It proves that he can do that. I think I can remember him scoring one away at Leicester earlier in the season and that surprised me at the back post, seeing the little man get up and score a header.

"Today's finish was up there with some of the very best headers of a ball in the world. It was a great finish.

"He could have had a few today but he kept going and kept going and got his goal in the end. I'm sure he'll keep doing that for the rest of the season."