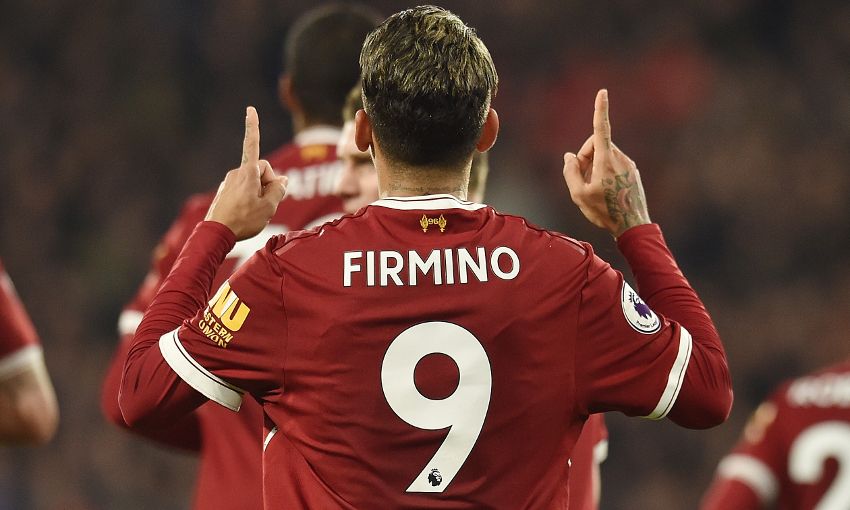 Roberto Firmino might be on course to surpass the most productive season of his career to date, but he’s not even close to being satisfied.

The Brazil forward – now a formally recognised No.9 following his transition into the role under the tutelage of Jürgen Klopp – has plundered 19 goals across all competitions in just 35 appearances.

It means with more than three months of the campaign still to be played, Firmino is closing in on his career-best tally of 22 strikes set during 2013-14 with Hoffenheim.

So, is he happy with what he’s achieved so far?

“No, I am never happy – I always want more from myself,” Firmino tells Liverpoolfc.com assertively during a chat at Melwood. “That will not stop until I’ve finished my playing career. I dream aloud and I want more and more from myself.

“I always enjoy scoring for my team and I always plan to do my best and try and help the team with goals.

“That makes me very happy because I am know I am helping the team when I score. I intend to score as many goals as I can to continue helping us to win.”

Praise for Firmino’s form this season has been effusive from all quarters – not least from his manager.

Earlier this term, Klopp hailed the No.9 as ‘the engine’ of his Liverpool team. More recently, he described him as ‘world-class, every day’.

“Although I don’t follow much on social media, every time I read or listen to these nice comments, I feel a very privileged person,” Firmino responds when these words are relayed to him.

“But I do not allow these kind of comments to go to my head; I want to give more and more in the next match.”

Firmino netted his latest goal at Huddersfield Town last week – and did so in typically stylish circumstances.

Navigating his way towards the touchline inside the home side’s area after collecting a cute lay-off from Sadio Mane, the 26-year-old quickly lifted his head, looked at the positioning of his teammates and opposing defenders, and then slid a shot through the narrowest of gaps between goalkeeper Jonas Lossl and the near post from a seemingly impossible position.

And Firmino feels it was hours of specific practice as a youngster back in Brazil that enabled him to convert from such an angle successfully.

He explained: “When the play started and I got the ball, I realised that I was on my own. I looked for my teammates, but none of them were well positioned inside the box.

“The opposition defence was very well positioned at the time, so I took a chance, shot and managed to score. It was a very small gap for the ball to go through, but I was happy with it.

“I actually commented with my family and friends afterwards that when I was very young, I used to play football with very small nets. Occasionally, we had ‘keepers, but generally I was practising scoring using very small, empty nets.

“I used to be quite successful, even with a ‘keeper on the line, and I think this is the reason why I was able to score, because I used to try it in training with my youth teams.

“Now, things have become easier for me in small gaps because of this.”

Audacious finishes are becoming increasingly commonplace when it comes to Firmino.

Take his recent effort against Manchester City, for example – a strike that drew parallels with a famous Robbie Fowler effort at Old Trafford back in 1995.

“Yes, I saw the comparisons and similarities with Fowler’s goal because I was sent an Instagram example,” Firmino responds with another one of his trademarks – a beaming smile.

Firmino acknowledges scoring goals makes him ‘very happy’ – perhaps something of an understatement if his celebration routines are anything to go by.

This season has seen the striker produce some elaborate post-goal performances, while in recent weeks the sight of him executing a ‘Kung Fu kick’ in response to an effort from a teammate has caught the imagination of supporters.

“I have celebrated one of my own goals like that once before [against Swansea], but my teammates had already started going back to the halfway line and the referee was calling me back to restart the game,” Firmino says.

“It was not well noticed at the time but I enjoyed it. When my teammates score a goal, I always take the opportunity to celebrate that way – the emotion makes things up in a way. It feels great to celebrate a goal.

“Since I became a professional football player, before I go out onto the pitch I’ll sometimes plan in my head what to do if I score a goal.

“I always try a new celebration, but when I don’t score I feel a bit sad. When I score a goal, I enjoy the moment – it makes me very happy.”

Few would bet against seeing several more celebratory Firmino drills before the conclusion of the campaign.

With 19, he’s currently Liverpool’s second-top goalscorer – but does he have any designs on catching the runaway leader Mohamed Salah, who has fired nine more to reach 28?

“I don’t think much about it, my mind is always on helping my team. That’s what I intend to do.”