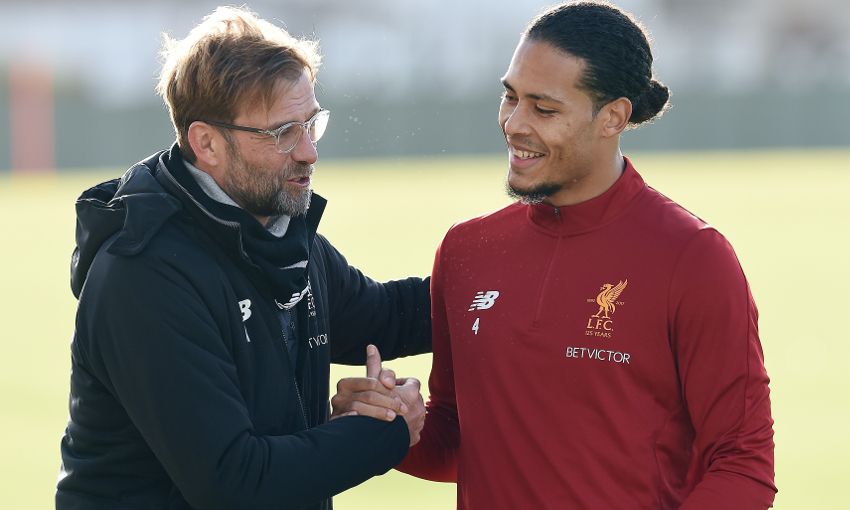 Virgil van Dijk's opening month at Liverpool has panned out exactly how Jürgen Klopp expected when the centre-back joined the club on January 1.

The Netherlands international has made three appearances for the Reds since completing a switch from Southampton, but sat out Tuesday’s victory at Huddersfield Town.

That decision was based on managing Van Dijk’s fitness, according to Klopp, who declared his satisfaction with the No.4’s start to life on Merseyside.

But the timing of his transfer, and the necessary integration period that follows, means fans can expect to see the defender at his best only after he has completely settled in.

“I’m very happy. It’s just exactly like it was clear it would be, with a few ups and downs,” the boss told reporters at Melwood.

“We will all see Virgil van Dijk at his best after the summer but we don’t have the time to wait until then, why should we? He can bring a lot of things in already and that’s good.

“We had a lot of talks already. It’s quite difficult, the defending style. Our defending is different to Southampton, for example, and Holland. That’s why it makes so much sense that you [have time to] get used to it.

“[Against] Everton it was outstandingly good; and then City he couldn’t play; Swansea was good defensively, we were really good against Swansea and he was involved in the three biggest chances we had, his header and then two passes, one for Mo and one for Roberto I think; West Brom was a bad game of the whole team. Then we thought it makes sense to rotate [against Huddersfield].

“At the moment it is like expected, to be honest. It’s completely normal. There’s a lot to do, a lot to work on, but the start is absolutely good.”

Dejan Lovren and Joel Matip combined in central defence at the John Smith’s Stadium in midweek as Liverpool returned to winning form with a 3-0 result over David Wagner’s team.

Having the pair fully fit allowed Klopp to name Van Dijk among the substitutes – a choice, he explained in detail, made due to the respective conditions of the trio.

“It was a purely physical thing. When Virgil came here he was not match-fit because he had a long injury, then he played, then he was injured, then the transfer was kind of an open case and he didn’t play for Southampton,” said the manager.

“So it was not a consistent season so far and I don’t know him long enough to say, ‘yes, you can play all three days’.

“We had the opportunity. Dejan was ill before and was back in training for a few days, so we had two completely fit players. I know how they react in different situations physical-wise, that’s why they played and Virgil didn’t play.

“I spoke to him about it and, to be honest, he expected it. He is still a new player. It would be better if he could play all the time but you cannot train in a Premier League match. We need to use the time between the matches; in the matches, we have to deliver.

“At Huddersfield, even when it looked afterwards like we won it quite comfortably it was not clear before the game that it would be this kind of game for the defence.

“The biggest difference in the games against Huddersfield and Swansea was counter-pressing. Ask Huddersfield, they [would have] used the Swansea game for analysis, it was a similar game. The biggest difference was our counter-pressing, and that’s then easier for the last line to defend. Hopefully in the next game it will be similar or even better.”