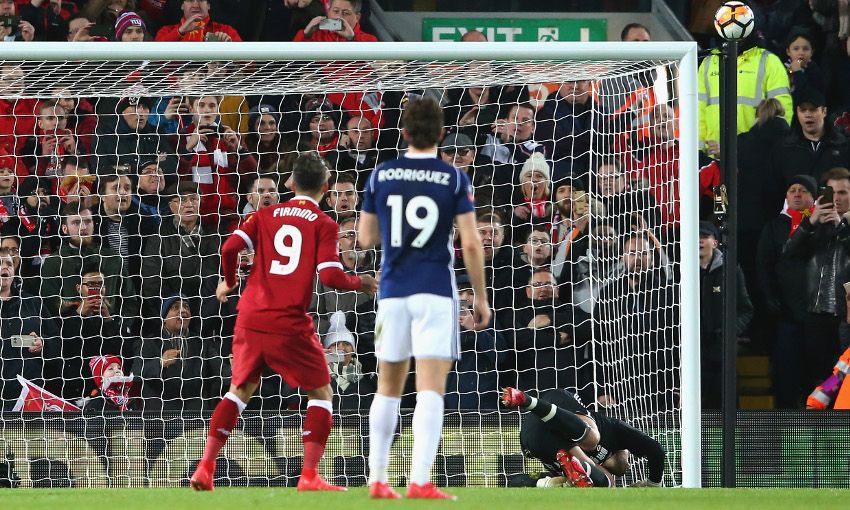 Jürgen Klopp is not overly concerned by Liverpool’s recent penalty conversion record, with the manager still convinced he has the players at his disposal to be clinical from 12 yards.

Roberto Firmino missed the Reds’ latest spot-kick during Saturday’s 3-2 defeat to West Bromwich Albion. It’s the second time the Brazilian has been denied in 2017-18, while Mohamed Salah and James Milner have also been foiled this season.

Nevertheless, Klopp insists he has no doubts about his team’s ability to be ruthless from penalty situations, despite missing six of their last 10.

Asked about the work done at Melwood, the boss replied: “[It is] a lot, really, it’s unbelievable.

“It’s good you ask; the boys, pretty much after each session, are out there and there are still four or five players who think they should take them. So they try it [in training], they do it and they are really good at it.

“Roberto Firmino was in this group, probably will still be in this group after training. He’d scored before a fantastic goal and is in a good moment, so it was a logical decision that he was the one to take. In the end it was about two inches from being a fantastic penalty or a missed penalty. It’s really not cool, but it’s how it is. We can make it bigger or we can accept it like part of the game.

“These things happen and will still happen in football. We had this last year when Millie scored it felt like 50 and then Southampton at home he didn’t score. It was a very important one to be honest, but it always can happen.

“It’s not cool but it’s not a real problem; we can make a problem of it, but we still have players out there that are able to finish a situation like that from 12 yards.”