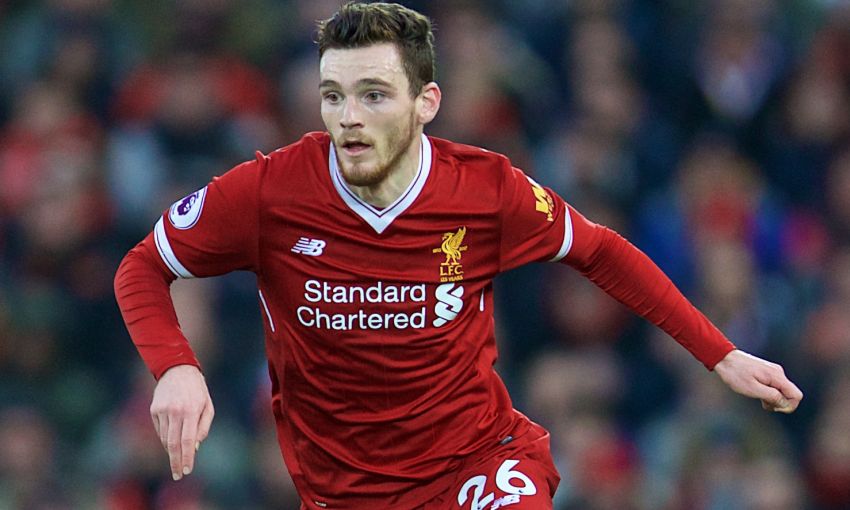 LFC 4-3 City: Watch the best of the seven-goal thriller

Andy Robertson declared the atmosphere during Liverpool's 4-3 win over Manchester City the best he has ever played in, and admitted to getting 'goosebumps' upon hearing his name chanted by the Kop.

The Scot put in another outstanding performance at left-back as the Reds inflicted a first Premier League defeat of the season upon the division's runaway leaders.

His efforts were recognised by the home support, who sang their approval after seeing the defender put in another committed tackle to deny City an opportunity down his flank.

Recalling the moment, Robertson told Liverpoolfc.com: "Just after we scored the fourth, I'd won a couple of tackles and to hear them sing your name it's always nice, especially [from] the Kop, the noise they make.

"It started getting going and it gives you goosebumps; I can't thank them enough for the support they've shown me from day one.

"When people come to Anfield, you know what the atmosphere's going to be like and I thought today was the best I've played in."

Robertson was also a prominent part of the celebrations after the Reds went 4-1 ahead courtesy of a brilliantly controlled Mohamed Salah lob over Ederson.

And the 23-year-old conceded he may have lost the run of himself after getting somewhat caught up in the moment.

He added: "I was right behind it so maybe I would say that was my favourite but I think I showed that in my celebrations!

"Mo shows his technique and composure to just take an unbelievable first touch and just dink it over the 'keeper."

Liverpool produced a tactical masterclass to deny their expansive visitors the time and space to create opportunities in the final third for large parts of Sunday's game.

Robertson believes the extra preparation time afforded by a Friday FA Cup fixture proved helpful to the hosts' cause in that regard.

"We've had a longer build-up due to playing last Friday so we could maybe work on a wee bit more things throughout the week," he continued.

"They're so good at just picking the pockets, it was all about half-spaces and closing them and then, if we let the switch happen, get out there - and I think we managed that today.

"I think our plan was good, even in the first half [even though] we did lose a sloppy goal. First half, it was nip and tuck and then second half we did enough to get too far in front.

"I'm sure for the neutrals watching today it was a great game and exactly what the Premier League is about.

"We probably would have liked it a wee bit more comfortable [and] I'm sure the fans would have.

"[But] second half, especially, the first 20-25 minutes, I thought we were unbelievable, they couldn't handle us and luckily we took the chances when they came."

Ever the perfectionist, the left-back went on to insist the focus must now switch to ironing out the issues that resulted in the concession of three goals.

"I'm sure the coaches and the manager will put things together and we'll see what we could have done better for the last two goals," he said.

"They were probably sloppy on our part but it was all about getting the three points today whether it was 1-0 or 4-3, we're absolutely delighted with it.

"Once it all calms down I'm sure we'll get the analysis out and see what we could do better for all three goals and if we look at that we can try and cut out the mistakes."