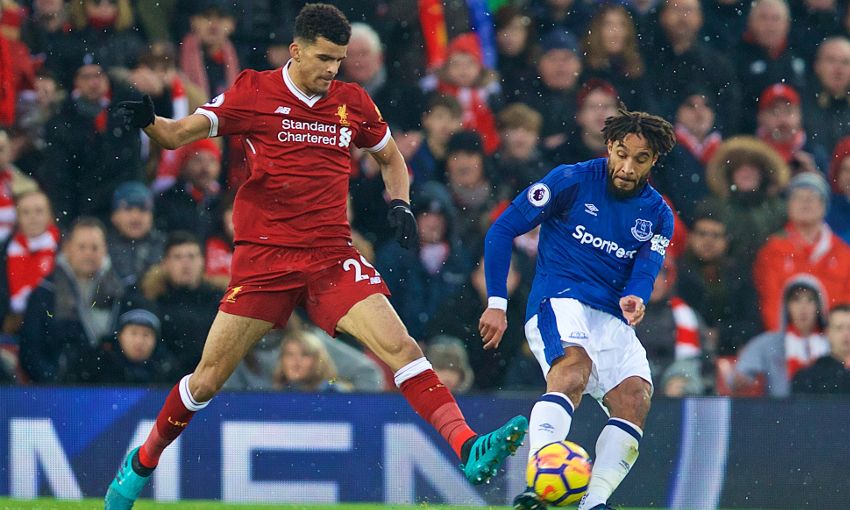 Liverpool were held to a 1-1 draw by Everton in the 229th Merseyside derby at Anfield on Sunday afternoon.

Mohamed Salah’s magnificent strike opened the scoring three minutes before half-time when the winger curled an unstoppable effort into the top corner to claim his 19th goal of the season so far.

The Reds conjured up a succession of chances to further their lead – not least when Sadio Mane struck wide after going clean through on goal – but the Blues were able to restore parity from the penalty spot on 76 minutes via Wayne Rooney after Dejan Lovren was deemed to have pushed Dominic Calvert-Lewin.

Jürgen Klopp elected to make six changes, with Alex Oxlade-Chamberlain and Dominic Solanke coming in to join Mane and Salah in attack and Philippe Coutinho and Roberto Firmino on the bench.

Elsewhere, Jordan Henderson, James Milner, Simon Mignolet and Andy Robertson were also named in the XI, though Daniel Sturridge was ruled out due to a tight hamstring.

With snow falling inside Anfield and an atmosphere of typical decibel levels for a Merseyside derby, Liverpool set about looking to prise open their neighbours from the off.

Mane had the game’s opening half-chance, but he slipped at the wrong moment after Robertson had cushioned Oxlade-Chamberlain’s cross-field pass into his path.

Salah then had an effort blocked by a crowd of blue jerseys inside the area as Liverpool probed for an opening.

Next, Solanke’s spin inside the area from Mane’s cutback couldn’t yield a chance on goal as the ball eventually rolled a touch too far ahead of Salah.

But clear-cut chances were proving difficult to come by with Everton defending deep in numbers – that was until a moment of outstanding individual quality from Salah finally unlocked the opposition.

Collecting the ball on the right, the No.11 initially demonstrated great strength to bounce off an attempted challenge from Cuco Martina.

Salah then jinked his way into space in the box, gliding beyond Idrissa Gana Gueye, before arching a shot over Jordan Pickford and into the top corner with unerring accuracy.

And Liverpool’s advantage could – and perhaps should – have been greater going into half-time after Mane forced his way clean through on goal, but dragged a shot wide of the far post with Salah and Oxlade-Chamberlain in support.

The Reds went agonisingly close to that second goal just three minutes after the re-start when Salah nodded Milner’s cross from the right inches wide of the far post.

Mane was then denied the opportunity to tap in from Solanke’s low centre as Mason Holgate intervened, while Ashley Williams managed to stop Lovren from converting at the back post after a corner had made its way in the direction of the centre-back.

It was a set-piece that created Liverpool’s next scoring chance, but Joe Gomez’s glancing header from Salah’s delivery skimmed the roof of the netting.

The Egyptian was withdrawn shortly afterwards, with Firmino taking his place.

Such was their dominance, the hosts’ lead should have been greater, but on 76 minutes Everton were presented with the chance to draw level via the spot after Lovren was adjudged to have pushed Calvert-Lewin. Rooney stepped up and converted beyond Mignolet to restore parity.

Coutinho and Danny Ings were sent on with Oxlade-Chamberlain and Solanke making way as Liverpool went in search of a winner.

It was the No.10 who forced a save from Pickford with a trademark 25-yard free-kick, but there was to be no further late drama as the points were shared on Merseyside.