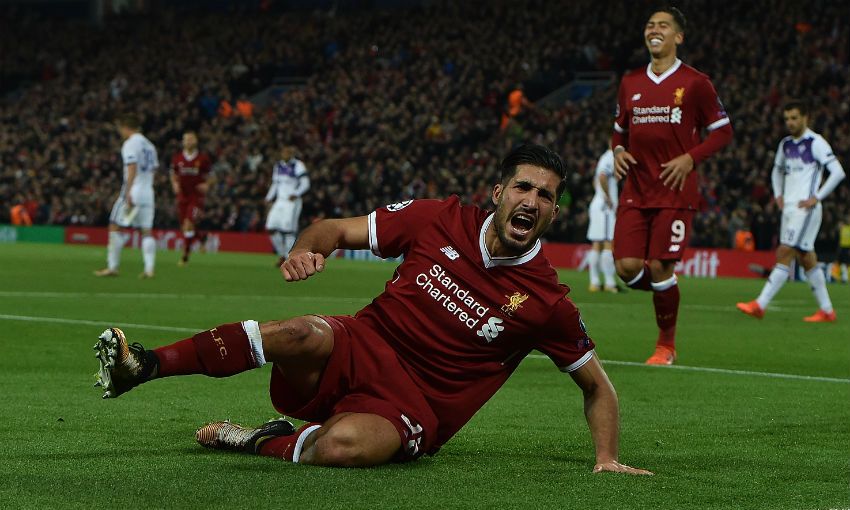 Liverpool’s patience pleased Emre Can after the Reds struck three times in the second half to defeat Maribor at Anfield on Wednesday.

A dominant display from the hosts went unrewarded on the scoreboard in the first period, but Mohamed Salah’s 10th goal of the season shortly after the break set them on their way to an ultimately comfortable 3-0 victory.

Can’s certain finish after a sharp one-two with James Milner and Daniel Sturridge’s last-minute goal rendered the No.7’s missed penalty - which came almost immediately after Salah’s opener - a mere footnote as Liverpool went one point clear of Sevilla at the top of Group E.

Emre on Maribor win and topping the group

“It was a game where we had to stay patient and I think we did it well,” Can told Liverpoolfc.com.

“First half it was very, very difficult because Maribor did it very well, they stayed good and defended very deep [so] it was not easy, but I think we stayed patient enough in the second half and then I think the key was the first goal.

“I think we’ve improved [against defensive teams]. I think if you compare to last year, we create a lot of chances and that’s good - in the league as well, not just today, and we have to play like that.

“Of course you can’t win every game 5-0 or 7-0 like we did against Maribor [away], and we have always to stay patient. We have to create chances and if you get the chance you have to score.”

Liverpool’s next Champions League fixture sees them travel to Spain for a top-of-the-table clash with Sevilla on November 21.

Can expressed his satisfaction at leading the way with only two group fixtures remaining, but also warned against any complacency with Spartak Moscow to also visit Anfield on matchday six next month.

“We are in a very good position. We are top of the table but the next two games will be tough, they are good teams, of course, but we will try to win those games and to play next year as well in the Champions League,” the No.23 added.