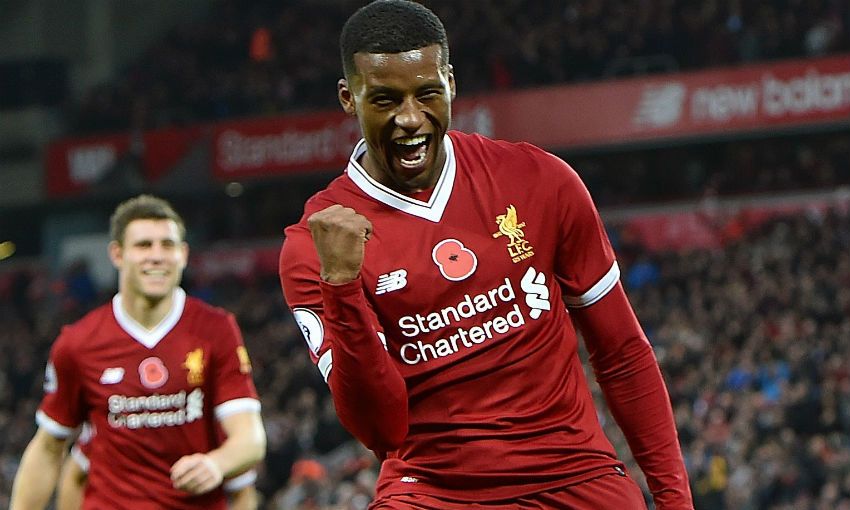 Georginio Wijnaldum hailed Liverpool’s much-improved second-half display after he put the finishing touch on their 3-0 victory over Huddersfield Town on Saturday.

A resolute defensive performance from the Terriers ensured it was goalless at the break at Anfield, with Mohamed Salah seeing a penalty saved shortly before the interval to compound the Reds’ first-half frustration.

But Jürgen Klopp’s team came out revitalised after half-time and Daniel Sturridge’s ice-cool finish gave them a 50th-minute lead.

Roberto Firmino doubled Liverpool’s advantage soon after, before Wijnaldum slammed home his first goal of the season off the underside of the Kop-end crossbar 15 minutes from time.

And the Netherlands international was left delighted with the Reds’ response to last Sunday’s sobering defeat to Tottenham Hotspur and a below-par first 45 minutes versus Huddersfield.

“Yeah of course, especially after what happened last week. We had to react,” Wijnaldum told Liverpoolfc.com, when asked whether Saturday’s result represented a big win.

“It was a tough first half - we didn't find the spaces, didn't create a lot of chances, so it was really tough.

“But in the second half, we did what we had to do, created more chances, outplayed them with our football and scored three goals.

“It's always a good feeling to score a goal, especially a beautiful goal at the Kop end. It was also my first of the season so I hope more will follow, but it's always nice to score a goal.”

Salah was denied from the spot by a strong save from Jonas Lossl three minutes prior to half-time, but Wijnaldum insisted that made no difference to how the Reds approached the second period, with Klopp having urged them to ‘stay calm and not get frustrated’.

“Everyone can miss a penalty, it happens in football. It's not sure that you'll score if you get a penalty, so it can happen,” the No.5 said.

“At half-time the manager told us to keep playing football, make more runs behind their defence, but he said the most important thing was to stay calm and play football and not get frustrated that they make the spaces really small.

“That's what we did, we were concentrated when we had the chances and we scored them.”

Wijnaldum also paid tribute to Sturridge’s composure in front of goal after the striker’s clinical dink broke the deadlock and relieved the pressure building inside Anfield.

“I think Daniel is a player who stays calm and can score those kind of goals, so we were lucky that the ball came there but also lucky that Daniel was standing there, because he knows how to deal with those situations.”

The Reds now face important games against Maribor and West Ham United in the next seven days before the international break, but Wijnaldum insisted that ‘every week is a big week’ for Klopp's squad.

“To be fair I don't want to speak about 'big weeks' because every week is a big week,” the midfielder said.

“Every week you have to collect points and win games and deliver so for me every week is a big week, especially when you play for Liverpool.”