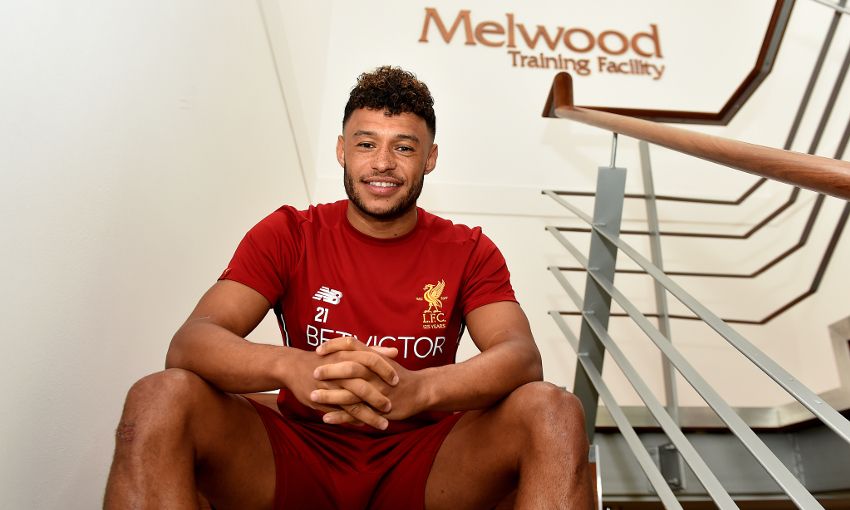 Alex Oxlade-Chamberlain conducted his first interview as a Liverpool player today - and you can now read or watch it in full online.

The Reds' new No.21 visited Melwood for the first time on Wednesday, meeting his new teammates and taking part in a light training session before sitting down to speak to LFCTV.

The 24-year-old discussed the reasons behind his decision to come to Anfield, the position he'd prefer to feature in for LFC, and his excitement about working with Jürgen Klopp.

LFCTV GO subscribers can watch it below now. Alternatively, scroll down to read the interview in its entirety.

Alex, a warm welcome on your first day at Liverpool. How’s it been?

“Very nice, it’s been a really good experience so far, everyone’s very friendly, the boys have all been great, all the staff have been really nice. I went upstairs this morning to get my breakfast and everyone was very welcoming and the food was amazing, so I couldn’t ask for a nicer start.”

You were away with England when the deal was done last week, so has it felt like a brand new start for you as a Liverpool player today?

“Obviously it’s been a bit surreal because usually when you sign for a club then within a day or two you’re straight into it, but with being away with England for nearly a week since I signed it didn’t really sink in properly for a while, I guess. But when you get in and see the boys and see your environment, that’s when it really sinks in but at the same time it’s been nice to get my head around things. I had time to speak to Hendo and Studge while we were away with England to find a few little things out about the club, but ultimately I just wanted to get here, meet everyone, see the manager and get on with it.”

Why was Liverpool the right move for you?

“I’ve admired the club ever since I’ve known football, and the players here and the whole feel of the club, it seems amazing. For me, it just seemed like the perfect fit for me in my further development - I’ve got big aspirations and I want to make big strides forward. With the manager and the team and the whole club in general, it just fitted perfectly for what I wanted. I’m ambitious, I want to win things as well, and I feel this is a squad that can definitely go on and do that. The players and the way the manager likes the boys to play, it’s very hungry and it’s a winning environment, so it all fit very nicely for me and hopefully these things can come to the fore and come true.” 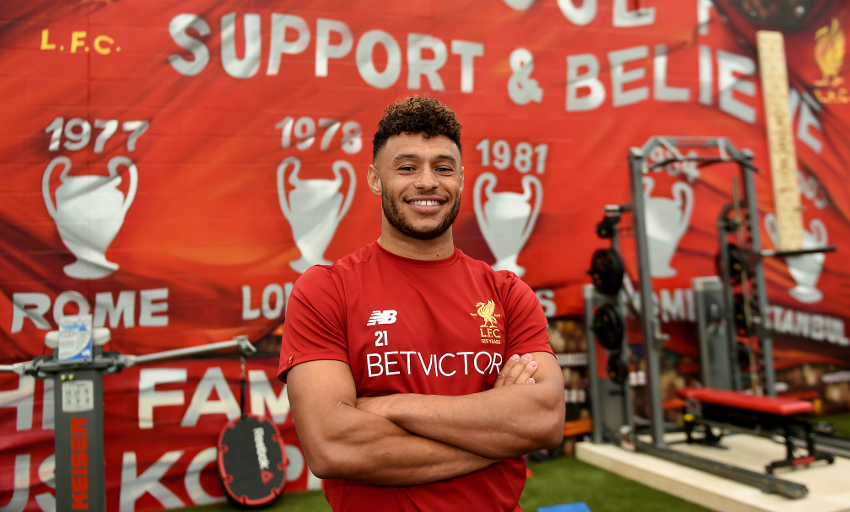 There’s a feeling that the club is on a journey that could be something special. Do you get that feeling too?

“Yeah, I have no doubt. The squad looks really strong and the main thing with winning is the hunger and how the boys apply themselves and I haven’t been here very long, but even from the outset it looks like everyone gives 100 per cent and really does play with that bit between their teeth to go and win. You can see that from the outside and then even just being here for one day you can get that feeling around the place as well.”

You’ve already mentioned Jordan Henderson and Daniel Sturridge, but Adam Lallana and Nathaniel Clyne are also here so there are a few familiar faces around the place for you…

“Sometimes you forget how many English players are here and that’s another great thing about the club, it has that British and English core about it along with a lot of amazing players from abroad as well. Just walking into the treatment room earlier and seeing Clyney and Adz, it’s always nice to see familiar faces and weirdly I felt like I’d been here for a while. All the physios and everyone were very welcoming and to see the familiar faces and the boys, to have a bit of banter with them straight away, it makes you settle in really easily.”

When you look at it from a midfielder’s perspective, what about some of the attacking options you might be able to serve from there?

“I mean, there’s endless amounts of talent in this squad [and] the attack does look frightening when you look at it on paper. I’ve seen the boys perform over the weeks and even through last season as well, they’ve got amazing talent up front and in midfield and right through the squad as well. I think the boys at the back, they’re all players who like to get on the ball and play an attacking style and pass the ball. Everyone’s very aggressive and looking to step in and it’s just a very positive way of playing. You mentioned the attack and everyone, but the full-backs are very attacking as well. You’ve just brought in Robbo, who I’ve played against a number of times and have had to track him back that way - when I played against Hull he had me running backwards a lot because he’s so attacking! So I think the whole team’s very attacking and obviously undoubtedly the boys up front are top class.”

The competition for places is intense, as with any top club - are you looking forward to that challenge?

“I've got to be, haven't I!? Definitely. It's always a challenge at any club, especially when you're at a top club like Liverpool, you've got to expect that. I think it brings out the best in you and keeps you on your toes and keeps you pushing and always trying to improve because you know someone's waiting to take your place. Or, at the same time, you could be waiting to take someone else's place, so you've got to be ready for that and that'll bring the best out of the team. Having that environment, a bit of ruthlessness, with boys wanting to be the best they can but at the same time happy to be a part of the team and push each other, that brings out the best in a team.”

There's a lot of talk about what your preferred position would be, what is the position that you feel most comfortable in?

“I've spoke about this for about six years - my whole career - where I'm going to be playing or where I'd like to play. I just say I'd like to be an attacking midfielder. I've spoke to the manager about this, there's going to be a lot of positions [available] in this team: up-front, because the wingers play a bit more inside, or the midfield. I wouldn't like to put a label on it at this stage, I need to get a feel for how the team plays and obviously it's for the manager to decide. But ultimately, I just want to be able to be an attacking influence and have that effect further up the pitch; whether that's from an attacking midfield position or one of the wider positions coming in, I'm not too fussed.”

What about the manager? How excited are you to play for him?

“Even as a neutral watching him last season, you [could see] he's a really interesting character and someone that seems very inspiring for people that aren't even involved in the club. Watching him, [you see] his passion and how much he cares about the game. The thing that stood out for me was his relationship with the players, how close he seems to bond with the players on and off the field. That's massive and it's definitely a big plus when you're looking to progress, having that relationship with the manager, that definitely helps. And then obviously the way his teams play, that's definitely inspirational for me and was one of the instrumental [reasons] - if not the main reason - that I felt this place was definitely the place for me.”

Jürgen has that admiration across football, doesn't he?

“Even when he was at Dortmund, you see these things from the outside when you look at managers and the way they work. He's definitely a manager that's very animated on the side and you sort of feel like you get to know him without even knowing him when you listen to him in his press conferences - and then the insights I've had from the boys on him. First of all, what he's achieved, you respect that straight away and how much he knows about the game, and then all his extra attributes - his relationships with the players and how he pushes you, encourages you and what he demands from you - that's like a bonus. That's what makes him special in my eyes.”

He's a manager that improves players - do you feel he can take you to the next level, too?

“Yeah, definitely. That's one of the reasons why I felt like he was the man I'd want to come and play for because I feel like he could really push me and hopefully get the best out of me and take me to the next level, for sure.”

You'll be back at Anfield soon as a Liverpool player, have you had any thought of what that's going to be like?

“'You'll Never Walk Alone' is something you can't miss when you play away at Anfield. I've heard it many a time over the years as an away player and it's always very impressive. It makes the hairs stand up on your arms and, as a player playing against Liverpool, it fires you up for the game and it's one of those moments where you realise, 'This is why I play football'. I can only imagine when that's your home fans singing that and the support that they give will give you that extra boost and it will be very special. I can't wait to get out there and experience it.” 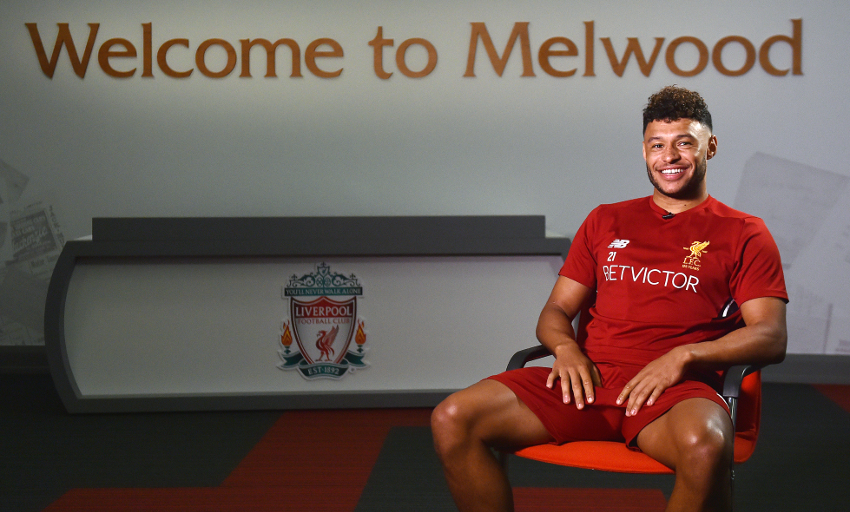 You've signed a long-term deal, so what are your long-term objectives?

“First and foremost I've just got to settle in and find my feet as quickly as possible. Then, [I need to] get to know the boys, the way that the team plays, give my all from the off and, ultimately, the main goal is to help the team achieve everything we can this year, but I don't want to look much further than that. But ultimately it'll be to improve myself as a player in the years to come and to hopefully help the team improve and for us to go on and be successful.”

Finally, have you got a message to Liverpool fans who'll be watching this?

“Some of you might have seen me play over the years, I can promise I'll be someone who'll always give 110 per cent for the club when I'm playing. I'll have a little bit of banter for you on the cameras as well if you want a few insights into Melwood! But no, I'll give 110 per cent whilst I'm on the pitch, I'll always try and be an exciting player, bring pace, hopefully a bit of power, and a bit of attacking flair. I'll always give that and hopefully we can have many successful years to come!”

Watch Alex Oxlade-Chamberlain's first interview as a Liverpool player on LFCTV GO, or via LFC TV at 9pm, 10.15pm or 11.15pm (all BST).