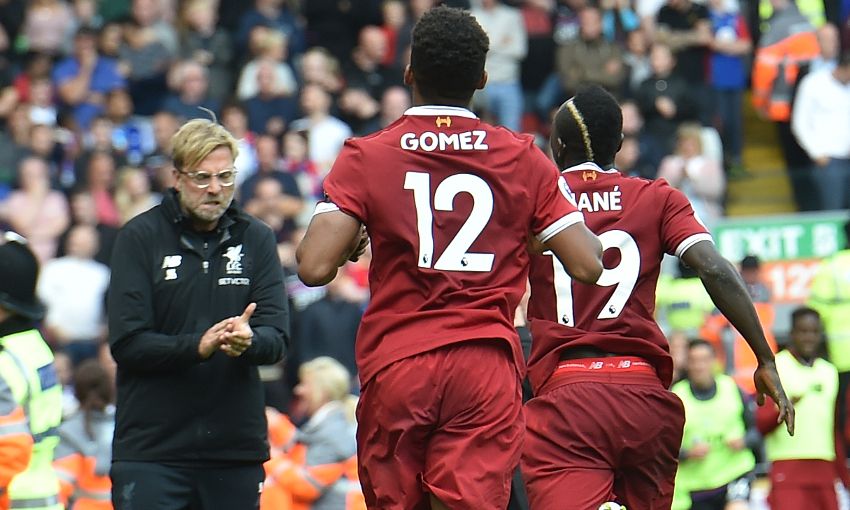 Jürgen Klopp had exactly the right words to maintain Liverpool's positivity when Saturday's game against Crystal Palace reached half-time with the score goalless.

Clear chances were at a minimum in the opening 45 minutes at Anfield as the five-man backline deployed by visiting manager Frank de Boer restricted the Reds on their maiden home outing of the season.

But the hosts were encouraged to remain patient by their manager during the interval, according to Joe Gomez – who started a Premier League match for the first time since September 2015.

That advice yielded reward in the 73rd minute, when Sadio Mane’s determination forced an opportunity in the penalty box that the Senegalese snatched with a reaction finish.

Gomez told Liverpoolfc.com of Klopp’s team-talk: “[The boss] knows how to get us going and keeps us positive – ‘come on, keep playing’.

“We knew we had to keep our heads and not get frustrated, keep moving it and [the goal] would come. Eventually, it did. Then it was about us defending and seeing it out.

“It was very tough. They have great threats up front and their attacking force is very strong. We had to be strong. It was good for us to get the goal in the end and then see it out.”

LFCTV GO: Highlights of the Anfield win against Palace

Mane was a standout performer for Liverpool once again, with little sign of rustiness in the No.19’s competitive appearances this term after his summer return from injury.

The nature of the winning goal was reminiscent of his strike on the opening weekend at Watford and his early-season form follows on from an impressive debut campaign with the club.

“He is lightning and he is clinical as well. It’s great to have the attacking force we have,” said Gomez.

“There’s so much strength in depth up front – you see Mo and Dom coming on. It’s great to have their impact and [the attackers] got the result for us.”

As mentioned, Klopp’s decision to use Gomez in his XI against the Eagles ended a 23-month wait for the defender since his previous start in the Premier League.

Back then, his fledgling career was halted by an anterior cruciate ligament injury that coincided with Danny Ings’ similar misfortune, and the pair rehabilitated together in 2015-16.

Ings was one of the first to congratulate Gomez on a landmark day for him personally.

“He’s a good, good mate of mine as everyone knows. I’m buzzing for Danny to be back and obviously it’s nice for him to look out for me like that,” the Englishman added.