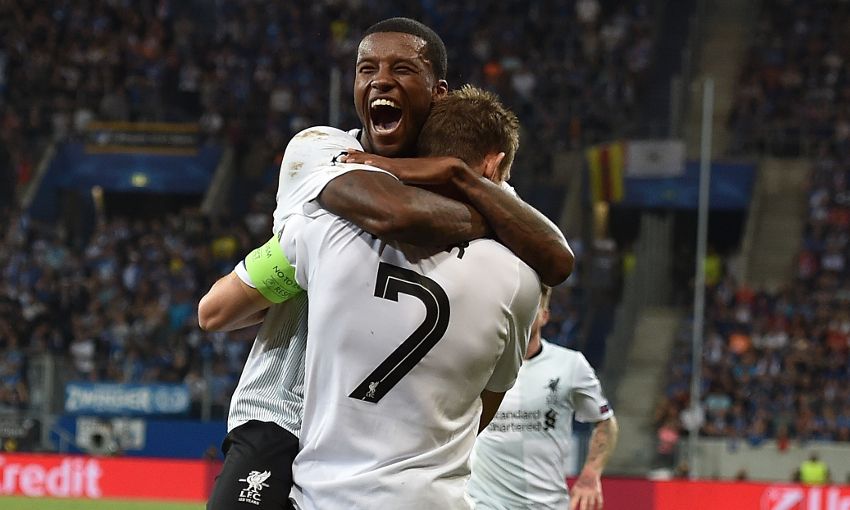 Liverpool's 2-1 win at Hoffenheim can only be considered a 'big' result if they complete the job in the return leg at Anfield, according to Georginio Wijnaldum.

Trent Alexander-Arnold secured a vital away goal in the first half with a sublime free-kick and the advantage in the Champions League play-off was doubled when James Milner saw a deflection beat the goalkeeper.

But Mark Uth responded in the final minutes of the tie in Germany, meaning there is plenty for Jürgen Klopp’s men still to do when the sides meet again next Wednesday.

“I don’t want to speak about a ‘big’ result, more a ‘good’ result,” Wijnaldum insisted to Liverpoolfc.com at Rhein-Neckar-Arena.

“The big result must be at the end of the two games and that means you’re through to the Champions League – so not a big result, a good result.

“I have to say, the game was very difficult because they played with three at the back and five midfielders, so it was really hard to close the gaps.

LFCTV GO: Watch the best of the action in Hoffenheim

It was indeed a game of many chances. Before the deadlock was broken, for example, Simon Mignolet palmed away a penalty from Andrej Kramaric to keep the score goalless.

And while the visitors might have increased their advantage, it was the manner of their late concession that left Wijnaldum with a tinge of frustration.

“More regret of conceding a goal… we stopped defending,” the Dutchman said.

“It was a good goal from the striker but if we had defended better the goal wouldn’t have come. But it happened – we have to adapt to the situation and do the job next week.”