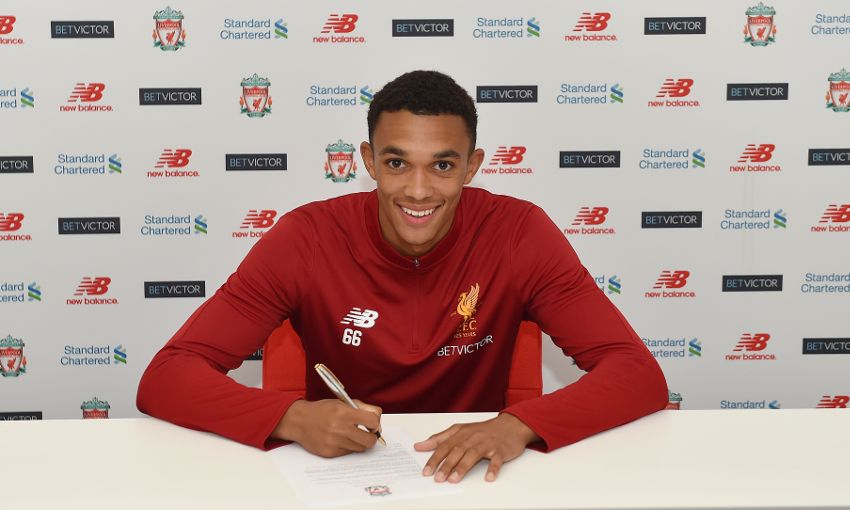 Trent Alexander-Arnold has committed his future to Liverpool by signing a new long-term contract at Melwood today.

The 18-year-old penned the deal at the training ground – where he has been part of the group that began pre-season training on Wednesday – after agreeing fresh terms with the club.

Alexander-Arnold enjoyed a breakthrough season in 2016-17, making his competitive debut in the League Cup against Tottenham Hotspur and playing in 11 more games, including seven in the Premier League.

“It’s exciting, a proud moment for me and my family. I’m excited for the good times ahead, hopefully,” he told Liverpoolfc.com.

“But I’ve said before, the hard work definitely doesn’t stop now. It’s only just beginning. Hopefully I’ll have many more moments like last season in this season and the seasons to come.

“I can’t take it for granted, the position and opportunity I’ve been given. Every day I’m trying to maximise the opportunity and do well.”

The No.66 will now continue pre-season preparations as Jürgen Klopp’s side build up to their first friendlies of the summer, against Tranmere Rovers and Wigan Athletic next week.

“You can never be satisfied with where you are. There is always room for improvement. It’s not a good thing if you ever are satisfied in football, you’ve always got to strive for better,” added Alexander-Arnold.

“Maybe you can dwell on achievements for a little bit but you can’t dwell on them for weeks or months. You’ve got to get back to the hard work.

“That’s what I’ll do straight away – I’ll get back into training, I’ll work hard and I’ll try to fight for a place in the team.”