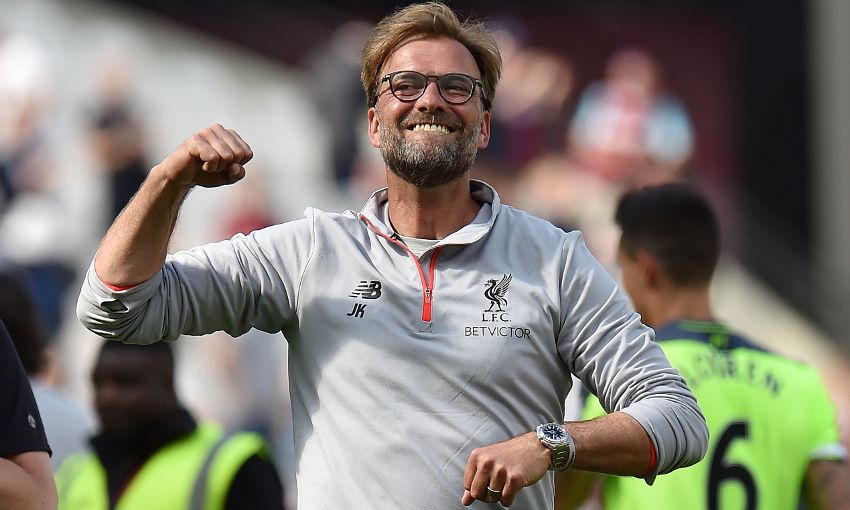 Jürgen Klopp reflected on 'a perfect afternoon' as he delivered his post-match verdict following Liverpool's 4-0 win over West Ham United at the London Stadium on Sunday.

The Reds claimed a crucial three points in their push for a top-four finish as a Philippe Coutinho brace and goals from Daniel Sturridge and Divock Origi saw off the Hammers.

Speaking at a press conference after full-time, Klopp provided an update on the fitness of absent forward Roberto Firmino, which you can read here.

To see what else the boss had to say in his media briefing, read our transcript below.

On 'a perfect afternoon' at the London Stadium...

Looking back now, it was hard work, and there were a few moments where the game could have changed. I thought we had a real deserved win, it was a really good football game. The start was not that good, we changed system obviously [and] the one thing that is then new is a little bit of the situation on the wing. The big chance they had [at] the second post area, we did not that good in this moment. But they couldn't score, then we controlled the game, then we scored the goal [and] we had another big chance with the header. We were the dominant side [but] they had absolutely one of the biggest chances I've ever seen in my life. They didn't score so that was a lucky moment for us.

The start of the second half was brilliant, we played really good football and we were more direct and used the information from the first half and from half-time. We [tried] a few different moves, a few different surprising movements and [had] better timing in passing and running. It's easy to say and much more difficult to do but the boys did really brilliant. We scored the goals, controlled the game, could have scored more often but that's completely OK that we didn't. A perfect afternoon.

On Philippe Coutinho in central midfield...

I can't remember when I said this but it was always clear Phil can play this [position], there's no doubt. If he starts on the wing, he is very often in this position. He was never a winger, he's always kind of a playmaker. It's not interesting where he's coming from, it's all [about] where he needs to be at one point. He needs to be in the decisive area in the middle of the park, he needs to be in shooting situations and all that stuff. That's what he did today - obviously he felt really well in this position and that was a good game.

It's obviously a good sign. Part of our lives is to handle pressure; to ignore the bad part of pressure and use the good part of pressure. That's our job. I thought we did really well. We drew in the last game, we didn't finish, we didn't score with the penalty, so maybe then people said, 'Yeah, well they can't deal with pressure' but the only sign for this was using a penalty or not.

These players did so good this season that we are in the situation we are, 73 points - and nobody gives you 73 points as a present. Take it and use it, we had to work for it. The boys did it and today we saw a really convincing performance and no doubt about anything. But the first sentence the players said in the dressing room was, 'One more time, one more game' and we will stay focused, 100 per cent. We know about the situation, we know about the difficulty of the next game and nobody will go into this game and underestimate Middlesbrough even one per cent. They have had a hard season, it's hard in a season like this to enjoy football and I am pretty sure they want to enjoy football at Anfield. They want to try everything to play good football and that makes life difficult for us.

[But] if we can be as focused as today, as fluent and have as good movement as today, then it will be difficult [for Middlesbrough]. But first of all, we have to train, we have to recover, we have to prepare and then find a line-up for the game. Hopefully Roberto is coming back and will give us another option. For today, we could not have done better.

On whether Daniel Sturridge's performance was influential…

What do you think? Yes, obviously, he is a good player. Unfortunately, he was not that often available, but it's all good. I thought the timing was brilliant - Roberto out, Daniel best training week, really good and part of everything. [He had a] fantastic game today.