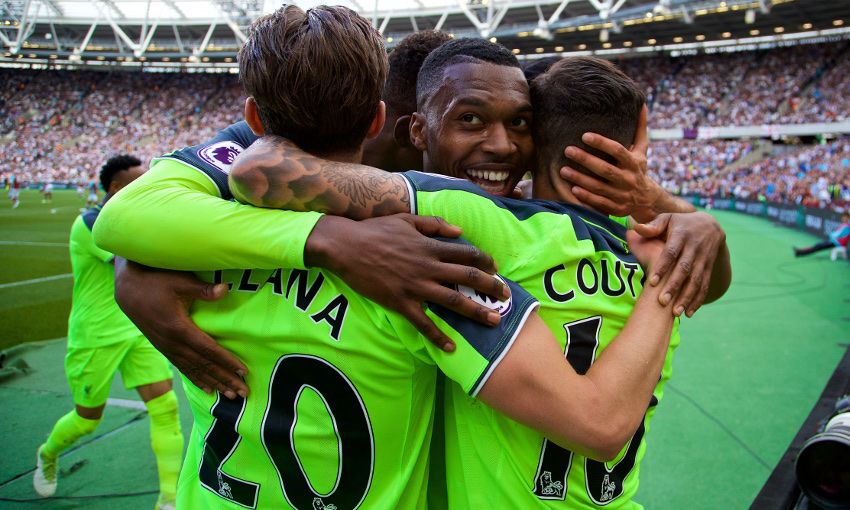 Liverpool took a significant step towards securing a top-four finish by recording an emphatic 4-0 victory over West Ham United at the London Stadium on Sunday.

The Reds grabbed the lead 10 minutes before half-time when Philippe Coutinho’s 40-yard through-ball sent Daniel Sturridge bearing down on goal, allowing him to round Adrian and slip home.

The Hammers should have levelled from Andre Ayew, but he twice struck the base of the post from point-blank range in an incredible passage of play following a corner in the last action of the first half.

Liverpool eventually doubled their advantage on 57 minutes courtesy of Coutinho, who found the bottom corner with a precise finish after jinking his way into space.

The playmaker then made it 3-0 when he capped off a speedy counter-attack by firing beyond Adrian after the visitors broke at pace from a West Ham corner.

Divock Origi rounded off the scoring by steering in a fourth goal from a loose ball inside the area to put the seal on an excellent day’s work for Jürgen Klopp’s men.

The result moves the Reds four points ahead of Arsenal in the table ahead of next weekend’s final-day Anfield clash with Middlesbrough, though the Londoners have played a game less.

With Roberto Firmino ruled out due to injury, Liverpool elected to make two changes with Sturridge and Adam Lallana coming into the line-up to replace the Brazilian and Lucas Leiva.

Liverpool kicked off their first ever fixture at the London Stadium knowing a victory would be crucial to their hopes of securing a top-four finish following Arsenal’s win at Stoke City on Saturday evening.

The Gunners stood one point behind the Reds after the same number of matches played prior to kick-off, meaning there was simply no room for error from Klopp’s side with just one week remaining of the campaign.

But they could – and perhaps should – have found themselves behind after seven minutes when Jonathan Calleri picked out the unmarked Sam Byram’s run into the area, but his drive across goal rolled the right side of the post as far as the visitors were concerned.

At the other end, Sturridge’s turn-and-shot from the edge of the area brought a routine save from Adrian.

On 11 minutes, the Reds fashioned a glorious chance to take the lead when Joel Matip’s downward header into the ground from Coutinho’s corner bounced up and cannoned against the underside of the crossbar before the Hammers managed to scramble clear. 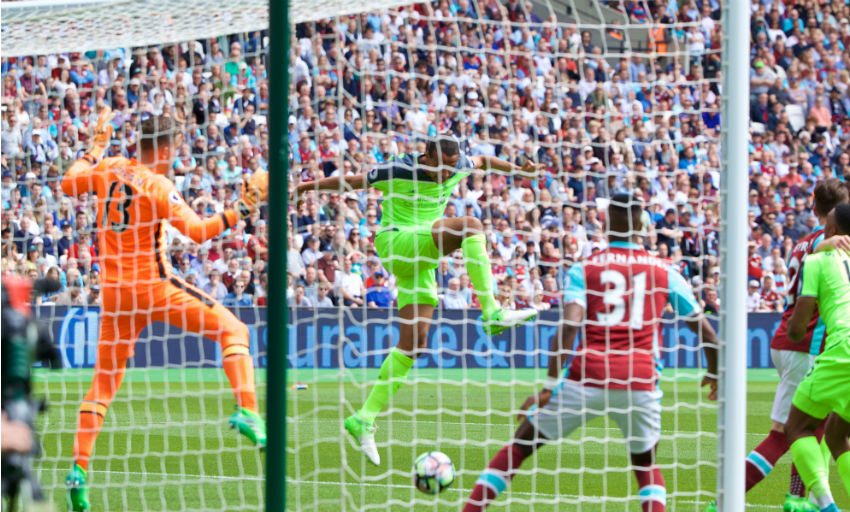 In what was proving a lively opening, Edimilson Fernandes’ ranger required a low, full-stretch save from Simon Mignolet to keep it out, before Coutinho hammered one into the gloves of Adrian.

Next, James Milner fashioned an opening only to see his effort deflect off Winston Reid and into the hands of the goalkeeper prior to Coutinho arching one narrowly over from 25 yards as Liverpool took a grip of proceedings.

Nevertheless, on 35 minutes, the Reds finally did seize what was a deserved lead. Coutinho’s magnificent through-ball from deep inside his own half picked out Sturridge in space. The England striker moved in on goal, side-stepped Adrian and duly rolled it into the unguarded net.

However, Klopp’s team should have gone into the dressing room on level terms at the interval after Ayew contrived to produce an incredible miss from inside the six-yard box. A corner to the back stick picked out the forward unmarked, but he prodded against the base of the post. It rebounded to him, but again he directed the ball against the woodwork before Mignolet smothered.

Liverpool could have doubled their advantage within 90 seconds of the re-start with a trio of opportunities. First, Lallana’s knock down for Origi was met with a thumping half-volley from the Belgian, which was repelled by the gloves of Adrian.

The Reds worked it back into the area, where Lallana then had an effort deflected away by the West Ham ‘keeper’s boot before Georginio Wijnaldum finally saw a low drive towards the near corner turned around the post.

By now, the visitors were completely dominant and clinched the all-important second goal just before the hour.

A half-clearance to just outside the West Ham area was met with a dipping first-time volley from Wijnaldum that cannoned against the top of the bar and clear. However, Coutinho collected possession, shimmed his way beyond two challenges and steered a low shot across goal and into the bottom corner. 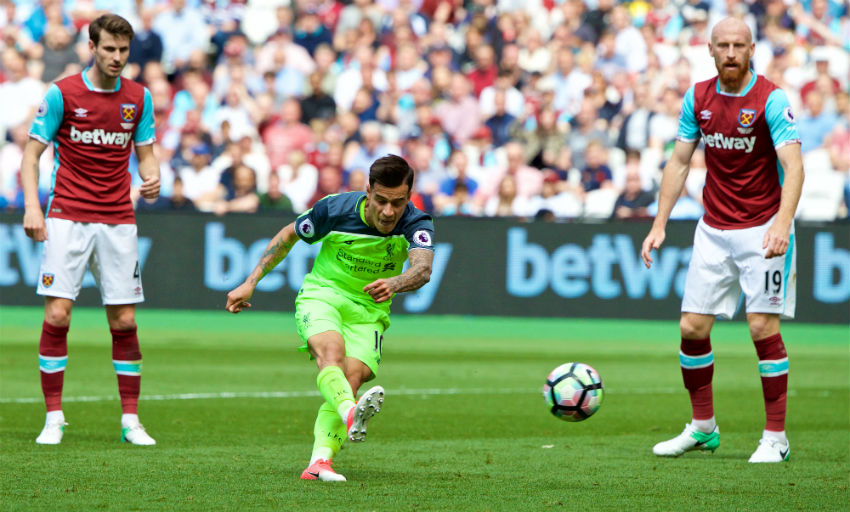 And just four minutes later, the Brazilian furthered that advantage as Liverpool sprung forward quickly from a corner from the home side, firing beyond Adrian from close range with outstanding composure.

Then, having earlier struck the top of the crossbar with a blast from way out, Origi helped himself to Liverpool’s fourth when he directed a loose ball in the box into the back of the net, capping off an afternoon in which the ambition of securing a top-four berth moved even closer to becoming a reality.