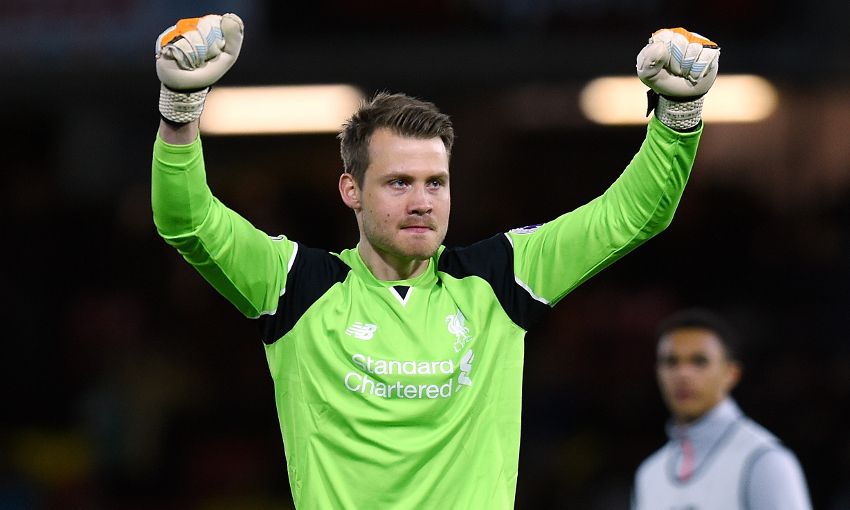 "Everybody wants it so much."

The huge appetite to send Liverpool into the Champions League is shared by every member of the squad, according to Simon Mignolet.

Jürgen Klopp’s side took a promising step towards that objective on Monday night when they notched a third successive away win by beating Watford 1-0.

Emre Can’s stunning overhead kick late in the first half was the difference between the sides, and the Reds’ mettle was once again tested as the minutes elapsed and the Hornets pushed forward.

Sebastian Prodl nearly broke Liverpool hearts in stoppage-time, but he lashed a shot from close range against the crossbar – meaning Mignolet and co could celebrate three hard-earned points at Vicarage Road.

The goalkeeper knows there is plenty of work still to do in the remaining Premier League games, though he stressed that the desire for the fight could not be greater.

“We have a very good squad and a very good dressing room,” said the Belgian. “Everyone is united and everyone is willing to fight for each other. There are no bad characters in there. There’s a really good spirit.

“We’re hungry to play in the Champions League. We know what it means, not only for us, but also for the fans of the club.

“The history of this great club has been all about fighting at the top end of the Premier League and against the best teams in Europe. Everybody wants it so much and we’re going to keep fighting for it. We have three finals left to play.”

Where the opening half of the season often saw Liverpool achieving clear margins over their opponents, recent weeks have featured performances filled with tenacity.

A comeback success at Stoke City, a narrow win over West Bromwich Albion and the result against Watford have consolidated the Reds’ position in third place at a crucial time.

Mignolet expects more of the same to be needed for the final three fixtures.

“I think we’ve played a lot of good football this season,” the stopper said. “But sometimes you have to learn how to play against these sorts of teams. We accepted that a lot had to change in that type of game. I think we’ve shown we have learned a lot.

“In the first half against Watford we were dominant and played the kind of football we wanted to play. With them sitting back, it wasn’t easy but we still created chances. We scored the goal at a great moment and in a great way.

“The second half was about trying to see the game out. They put a lot of long balls into the box to try to create something and there were a few set-pieces and crosses but we dealt very well with it, until that last one when they hit the bar.

“We were very relieved that didn’t go in. It would have been a nightmare to concede so late.

“It’s not easy against big players like [Troy] Deeney and Prodl but we defended set-pieces and balls into the box a lot better. Everyone did their jobs and we saw it through. The three points were well deserved.

“To win at places like West Brom, Stoke and Watford shows we can do this. We have three more games like this to play. We have to keep that balance and grind those results out.”

Can’s Goal of the Season contender settled the clash in Liverpool’s favour as the midfielder produced an exquisite, acrobatic volley to loop the ball beyond Heurelho Gomes.

“It was a brilliant goal,” added Mignolet. “I was in line with the ball and I saw it going away from the ‘keeper – he had no chance.

“Full credit to Emre for the technique he showed. Getting up like that and then having the flexibility to connect and put the ball in the net like that. It was very impressive.

“It means so much more when a goal like that gives you three points, especially at this stage of the season. If we keep a clean sheet, then we know with the quality we’ve got going forward we’ll have a great chance of winning games.”