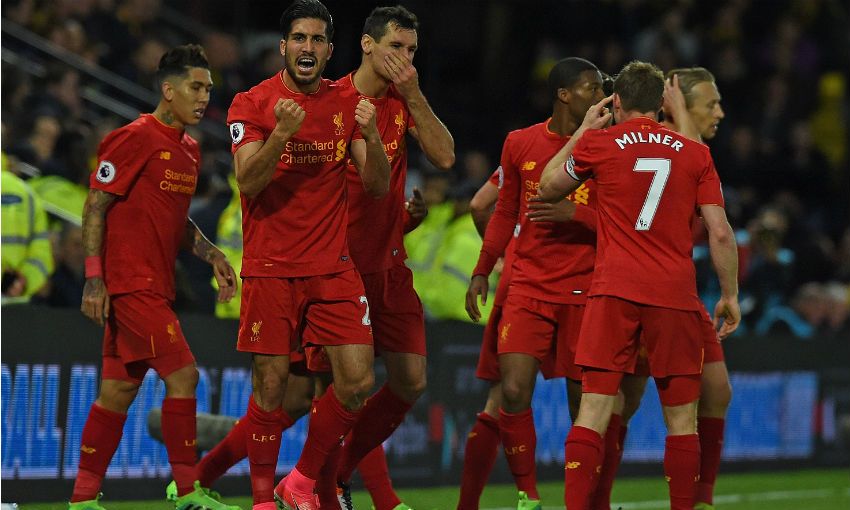 Emre Can's sublime overhead kick helped Liverpool bolster their push for a top-four finish with a 1-0 win over Watford on Monday evening.

The midfielder grabbed the game’s only goal at Vicarage Road in first-half added time – and in style too, meeting Lucas Leiva’s ball forward with a spectacular effort that sailed into the top corner.

However, they were forced to survive a scare when Sebastian Prodl smashed a strike against the crossbar in the final seconds, but the result consolidates the Reds’ position in third in the Premier League table, moving them four points ahead of fifth-placed Manchester United having played a game more.

Liverpool named an unchanged starting line-up for a third successive game, but the bench was bolstered by the returns of Lallana, Daniel Sturridge and Ragnar Klavan.

With Sunday’s results involving the other teams in top-four contention all going in Liverpool’s favour, they kicked off at Vicarage Road knowing how valuable acquiring three points could prove in the pursuit of Champions League qualification.

However, they were dealt an early blow when Coutinho sustained a knock to his thigh in a challenge on the edge of the opposition penalty area. His attempts to play on after receiving treatment proved unsuccessful as he struggled to recover, meaning he was replaced by Lallana after just 13 minutes.

Watford also suffered an injury setback soon after, with Miguel Britos limping off, meaning the contest was unable to form any kind of pattern in the opening exchanges as both sides were required to reshuffle.

However, Can forced Heurelho Gomes into a flying stop with a low left-footed blast from range as the Reds attempted to assert themselves.

Still, the game was far from being laden with chances – until Lallana almost found the net with a sensational effort four minutes before the break.

Pouncing on Gomes’ punched clearance from a corner, the playmaker struck a crisp first-time volley back towards the target from 25 yards, which crashed against the underside of the crossbar and away from goal, with Divock Origi unable to reach the rebound.

And with that, the game appeared to be heading towards a goalless stalemate at the break, but Can had other ideas as he broke the deadlock in quite sensational fashion.

Lucas’ lofted ball into the area picked out the German’s run and in turn, he found the back of the net with a scissor-kick that arched over Gomes and sailed into the top corner, giving the visitors a one-goal lead at the interval.

Liverpool crafted another goalscoring opportunity moments after the restart when a James Milner free-kick from the left corner of the area was parried to safety by Gomes. Next, Origi cut in from wide and drilled one that required another stop from Watford’s custodian.

Then, on 56 minutes, Joel Matip’s clever ball from deep released Origi speeding into the box but his low drive was repelled by Gomes.

By now, the Reds were in total control; however, Watford served up a reminder that the contest was far from over when Nordin Amrabat cracked an effort against Dejan Lovren inside the box before Etienne Capoue’s follow-up needed Simon Mignolet to push the ball over the crossbar.

But it was a passage of play that was enough to afford some encouragement to the hosts and their crowd inside Vicarage Road – although that enthusiasm could have been quashed had Lallana been able to control Can’s pass at the conclusion of a counter attack, but the ball was a touch too far in front of him inside the area.

With the game edging towards its conclusion, Jürgen Klopp elected to bring on Sturridge and then Klavan in place of Origi and Lallana.

And while Watford continued to toil in search of an equaliser, Liverpool fostered efforts via Matip and Sturridge that needed the intervention of Gomes to keep them out.

However, there was almost heartbreak when, in the 94th minute, the ball broke invitingly for Prodl eight yards out, but his powerful whack smacked against the crossbar and flew to safety.

Nevertheless, the Reds held on to their advantage – one that with just three games to go in 2016-17, leaves them well placed to book a spot in next season’s Champions League.