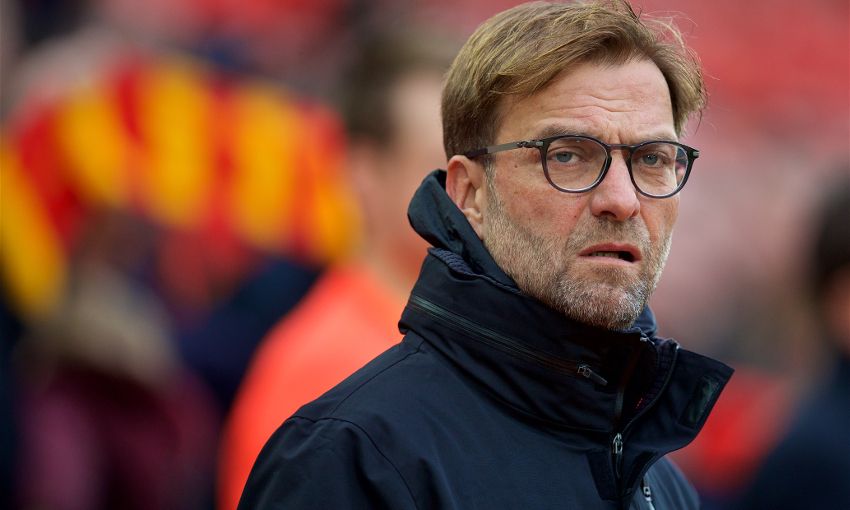 Jürgen Klopp wants to make maximum use of a return to Anfield on Sunday as Liverpool try to maintain their quest for Champions League qualification.

The Reds host Crystal Palace in the Premier League this weekend, with the manager jokingly bemoaning the feeling of not having had the chance to play at home ‘for eight weeks or something’.

In reality, it is just over a fortnight since Klopp’s side were held to a late draw at their own ground by Bournemouth – and they have produced exactly the desired response in the interim.

A comeback victory at Stoke City preceded a hard-fought 1-0 success over West Bromwich Albion on the road, leaving Liverpool with their top-four fate in their own hands with five games remaining.

“What I can say is that we really need all our passion in a situation like this,” said Klopp. “I said a few days ago that it’s not about playing the best football, it’s about getting results.

“Most of the time it works if we’ve got a good plan. But a lot of passion is really important. We need all the passion from the stands. It’s Anfield. We’ve had two away games. It feels like we last played here eight weeks ago or something. Now we are back.

“It’s Crystal Palace, it’s Sunday afternoon, so let’s go on for this game and do our best.

“That starts with the first whistle, but if we can start with the atmosphere around it I’d be really happy. It would be really appreciated if the crowd could be in their absolute best mood. It would be nice.”

Klopp will again be without Jordan Henderson and Adam Lallana for the visit of the Eagles, while Sadio Mane’s outstanding maiden season with the club is, of course, over due to injury.

The manager has a headache at centre-half, too, reporting at his pre-match press conference that Ragnar Klavan, Lucas Leiva and Joel Matip are doubts for the game.

Injuries have not been kind to Klopp’s squad throughout the campaign, but the German insisted the setbacks are a result of misfortune rather than Melwood practices.

He said: “Look at the injuries we’ve had – not a lot of muscle injuries, which is a sign of intensity. It’s not the moment in the season where we are having the hardest training or whatever, so it’s all about individual situations.

“We have managed Roberto Firmino for the last few weeks, kept him out of a few sessions to get back his freshness, so it’s not that.

“If it happens in the game, it is different. Lucas got a knock, not serious, played until the end, a few problems. It was similar with Joel. Even he didn’t say anything but there’s a bit of a muscle problem.

“Ragnar’s was contact in training, a knock to the knee, not long, but out. Sadio and Phil [Coutinho], the long-term injuries, you saw what happened. That wasn’t about intensity, it was about challenges.

Where the manager is happy to admit improvement is needed is in the number of goals Liverpool have conceded in the Premier League this term – 40 from 33 games so far.

“They don’t make sense as a statistic,” the boss added.

“It is not because there’s a fault in our general defending style – it is not that we are too high or can’t defend counter attacks. We don’t concede a lot of goals like this.

“We are a good defending team, the highest level defending team, but at the end we still concede goals from different situations. We have to improve, of course, but it is not the biggest issue we have.

“We have conceded a few around set-pieces and a few counters, but not attacks. The number of goals we’ve conceded is absolutely too high.

“It is really rare in my personal history that we concede goals like that big number, but we will work on it 100 per cent. But it’s not about a defending style.”