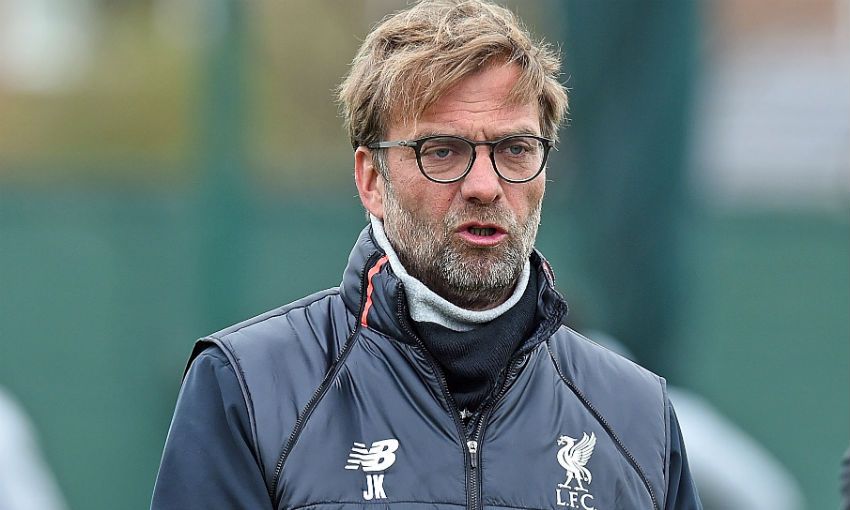 Jürgen Klopp’s sole focus in the remainder of the season will be on Liverpool’s opponents, not the fortunes of their rivals for a place in the Premier League’s top four.

The race for Champions League qualification looks set to go to the wire, with just six points separating the Reds in third with sixth-placed Manchester United as 2016-17 enters its closing stages.

However, Klopp is interested only in how his own team performs in their final seven games of the campaign.

“All the opponents we play because they have only one target, that’s football,” the boss replied, when asked who he sees as the biggest threat to Liverpool’s ambitions of securing a top-four berth.

“There’s nothing else I think about. The situation is as it is, so it is our situation. We play now Stoke and all the other teams - we don’t play them any more so we don’t have influence on their games.

“They play their own season and we have to get as many points as possible and we will see where it ends.

“I don’t think that 60 points, or 62 or 65 will be enough to go to Champions League so we need to collect a few more points and then after Middlesbrough [on the last day of the season], we’ll know exactly where it ends.”

Klopp also insisted that he is not currently considering whether not qualifying for the Champions League would constitute a failure.

“We will see what happens. Our opponents are really strong [and] two of the six involved at the moment will not be in the Champions League next year,” he said.

“We want to qualify for the Champions League and if you don’t then you can think about the reasons for that, but at the moment we don’t think about that or why we only have 60 points or why we have already 60 points.

“The only thing we think is about building a line-up for Stoke - and that’s a real challenge today, actually - and how we can be as strong as possible there and win the game.”

Liverpool have already amassed the same number of points this season as they did throughout the whole of 2015-16 (60), with seven matches still to play.

Klopp added: “I think we have made [progress]. I thought we had wonderful games this season, actually.

“We had a few injuries until now and if you take out all the players which we missed from other teams then if they can play their best football, I’d be really surprised but it’s our situation, we have to fight for it.

“About progress, we can speak after the season. If you didn’t see progress up to now then it is our fault because it should be obvious.

“We’ve still scored, until now, the most goals in the league and that’s for sure not bad. Yes we conceded too much [but] we’ve had wonderful games at Anfield and away.

“60 points, you don’t get for nothing - you have to do a really good job and after all the problems we’ve had this season, being in this position is good but the season is not finished. That’s what we have to know and to use the rest of the season to have more points than these 60 after the last game.”

On the challenge he expects Mark Hughes’ Stoke City to pose at the bet365 Stadium on Saturday afternoon, Klopp commented: “[They are a] Good team. Different parts in the season, different performances, but still good.

“Not the best results in the last few games, but really good and Stoke is not an easy place to be, everybody knows about this.

“They have different options but the style of play should be pretty clear and it’s a good football-playing side, obviously.

“I don’t think Stoke thinks about being in danger or whatever, they’re maybe one of these two, three teams who don’t fight for the one thing or fight against the other thing so that’s a comfortable situation and I think they have kind of a natural confidence.

“They have a very experienced manager, a very good manager, so it’s a difficult place to go, but it’s the only place we want to be tomorrow.”