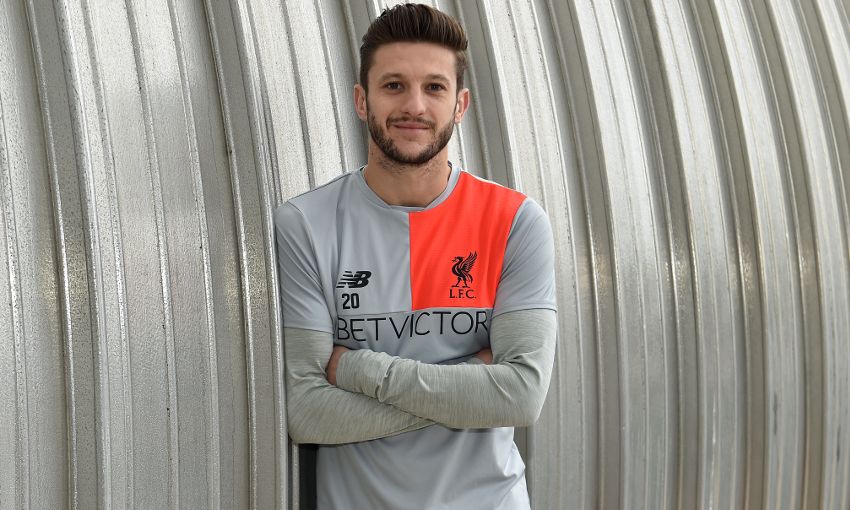 The feeling that ‘something special’ is coming together at Liverpool ensured Adam Lallana quickly reached the decision to sign a new contract with the club, he has explained.

The No.20 today put pen to paper on a new long-term deal with the Reds, and revealed that he ‘didn’t hesitate for even a second’ when presented with the opportunity to extend his Anfield stay beyond a third season.

After penning fresh terms at Melwood this afternoon, Lallana sat down with Liverpoolfc.com to articulate his desire to reward the club’s fans for their support, the role Jürgen Klopp played in his decision, and his belief that the German coach will help bring silverware to LFC.

Read on for a full transcript of his interview below.

Adam, congratulations. How are you feeling after signing a contract extension for Liverpool today?

Very proud and I feel quite humbled by the show of faith from the club and the manager in particular. Signing for a club like Liverpool is obviously a big thing – but to re-sign shows you’ve obviously contributed enough that the people who make the decisions want you to stay longer. This is a really good place to be at the moment and for a player who wants to be part of something special I can’t think of a better club to commit your future to. We have a brilliant squad of players, who are only going to get better the longer we are together. We have a world-class manager and coaching staff. And because it’s Liverpool there is that added X-factor of the supporters and what success would mean to them when we achieve it here. I’m just delighted that I’m going to be part of it for even longer.

Why have you decided to sign a longer contract here? What were the key factors?

I’m very settled and I feel part of this club. I’m going to be honest, it took a little time to settle here, but looking back that was down to a variety of factors, such as that the team at that stage was in transition and we had a big turnover of players the summer I joined. But I couldn’t feel any more at home now and I think that shows on the pitch. The best part of this for me is that I feel I can really contribute in these coming years. I feel like I’m playing the best football of my career and I feel fresh and ready to perform at this level for a long period of time now; I suppose that’s the challenge I have to make to myself. It wasn’t a difficult decision to commit longer here. We have a brilliant group of players, a world-class manager and coaching staff and this is Liverpool Football Club – I didn’t hesitate for even a second.

Do you feel the club is in a positive moment and heading in the right direction?

Absolutely, that is without question. We have everything in place here to be successful. I think we can keep this squad of players together for a long period and that can only be a good thing. We know the manager has committed himself to the club long term, so we have everything in place now. We have stability and ambition – that’s a decent combination. The Premier League is unbelievably competitive, everyone knows that, but when I look at what we have in our squad I genuinely believe we can beat anyone and everyone in this league and do so consistently. It’s a good time to be at Liverpool, but as the manager said recently, we are still early in our development so even better times lay ahead.

What are your short-term and long-term ambitions for the team?

Winning. Short-term and long-term – it’s about winning. Since I’ve been here we’ve come ‘close’ – so we aren’t a million miles away. In my first season we reached the semi-finals of both domestic cups, and last season we reached two finals, including a European final. This season another semi-final and obviously we’re right in there in the Premier League shake-up. So we’ve been ‘close’, but all of us want to actually win things and as many things as we can. The gaffer is a proven winner and we all trust him completely. So short and long-term it’s about winning trophies for Liverpool.

Personally, you’ve progressed and developed a lot in the last 18 months – what is that down to?

It’s a tough question to answer, really, because I think there are a lot of misconceptions, but that’s part of football. People think I’m fitter and more confident, but I think that’s down to perception. I played at Southampton under [Mauricio] Pochettino, and trust me, to play for him you have to be physically fit at all times. I captained Saints in the Premier League at what was quite a young age, so you need confidence for that. I think what is fair is that I am more settled, but probably more importantly the team and club is settled. I joined a club that had undergone a huge transition during that summer and I was part of that – that means it takes time. But I don’t feel I’m any different or any better than the person or player who arrived here in the summer of 2014, just more settled and at home maybe.

Your relationship with Jürgen Klopp is well known. How important has he been for you and how important was he in convincing you to sign this new deal.

Well firstly, I’d like to take this opportunity to thank Brendan Rodgers for having the faith to sign me in the first place. I’m extending my contract today – but I will always be grateful for the opportunity he gave me to come to this club in the first place. As for the gaffer, I’m not sure there’s anything new I can say on him that hasn't been said already by most, if not all, of our team. I heard Phil Coutinho’s comments after he signed his new contract and what he said about the manager echoed what we all think; he’s world-class, he’s a winner and we trust him completely. The manager is a special talent and we are lucky to have him here and it’s great he’s committed for the long-term as well. But I think the most important word with our manager is ‘trust’. We trust him and in turn he places a lot of trust in us – and hopefully we reward that on the pitch for him.

You’ve become a firm favourite with the Liverpool supporters as well - they sing your name a lot at Anfield and at away games. That must mean a lot?

Of course it does. My family love it I have to admit; my dad, my mum, my sister – and my wife and kids love to tell me after a game if the supporters have chanted my name. To be honest, I don’t often recognise it myself during the match because I’m engrossed in the game, but I recognise it’s a big compliment. I hope the supporters recognise performing for them and working hard for them is something that matters to me. I’m someone who will give everything and always try to be brave and positive – hopefully that gets recognised. You can’t always promise to be the best player on the pitch but I think you can promise to try your best in each and every game. I try to do that and I think the Liverpool supporters see that in me.

It’s generally recognised you’re playing the best football of your career at the moment – for example you’ve recently been named England Player of the Year for 2016. Is it an aim to maintain that now, to keep it going?

Of course. It’s very difficult to analyse yourself – I think most people feel uncomfortable passing judgements on their own performance and that. I would say I feel in this moment like I’m playing as well as I ever have – and if that is the case then of the course the next challenge is to maintain or improve. That is always the case at a club like this; you have to keep proving yourself and challenging yourself. I’ve done that all of my career and faced those challenges. Would I be strong enough physically and mentally for League One? Could I make the step up to the Championship? And then captaining Saints in the Premier League. Question marks over international ability and of course could I make an impact here at Liverpool? I’ve always had these questions and the next one is can I maintain this form now. It’s down to me to prove it now; I think my best years are still ahead of me because I feel so fresh and confident. Obviously the best place to answer it is on the pitch – rather than in an interview – so let’s see…

You’ve said recently you ‘feel at home’ in Liverpool – and you’ve said it again during this interview. Can you expand on that for us? Have you fallen in love with Liverpool ‘the place’ as well as the club?

By ‘feel at home’ I mean more on the football side – but it does apply to family life as well. To be honest ‘home’ in that sense for me will always be where the family is. My wife and children, mum, dad and sister – they all make sacrifices to be part of this journey and without them being so supportive and being with you, it would be so much more difficult. I’m very, very lucky in that regard, so if I had them with me I could live on the moon and still feel ‘at home’! It’s more a football-related answer. I feel settled and at home in this team and at this club now. It’s a hard feeling to explain and I can’t tell you if there was a specific moment when it happened, but it definitely helps you perform and do well on the pitch. Hopefully I will have this feeling for the remaining time here, however long that is now.

Adam Lallana signs new long-term Liverpool FC deal
Klopp: Lallana’s best is yet to come – and I’m so pleased it’ll be at LFC
Melwood photos: Adam puts pen to paper
Adam Lallana: Inside the body and mind of a Liverpool player
Gallery: Lallana at Liverpool - the story so far