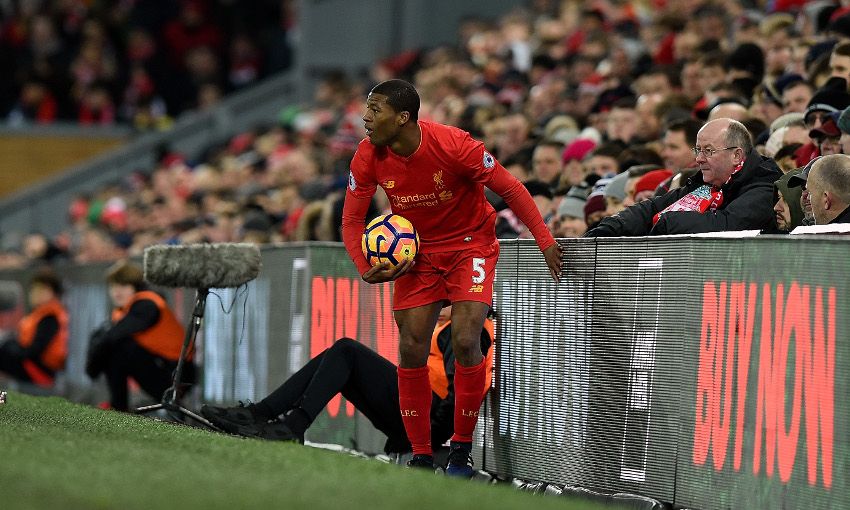 Georginio Wijnaldum heaped praise upon Liverpool's performance after yesterday's 2-0 win over Tottenham Hotspur and declared: 'This is how we have to play'.

The Reds ended a five-game winless streak in the Premier League as Sadio Mane netted twice in the first half at Anfield to put Mauricio Pochettino's side to the sword.

The hosts were the dominant force throughout, with goalkeeper Hugo Lloris producing some heroics between the sticks to keep the score respectable for the visitors.

And, speaking after the game, Wijnaldum claimed he and his teammates had delivered a showing that should serve as a blueprint for their 13 remaining fixtures.

"We did great - especially the first half, we played a good game with two good goals," he told Liverpoolfc.com.

"The second one was a little bit lucky, that they made a mistake, but still you have to score a goal. This is how we have to play.

"The problem this year was more that we didn't do it against the smaller teams [but] against the bigger teams everyone was motivated and we delivered."

Liverpool's win over Tottenham took their unbeaten streak against top-six teams this term to eight fixtures.

But it is in meetings with the league's so-called lesser lights that Jürgen Klopp's men have largely struggled in 2016-17, failing to beat Sunderland, Swansea City and Hull City during a recent fallow run.

With a visit to Leicester City next up for the Reds, Wijnaldum wants to see the intensity shown on Saturday sustained, regardless of the opposition.

He added: "Today is good, we won the game and we must enjoy it for a few days but then the focus must be on Leicester City.

"They didn't do really well this season but they are still a good team and we have to make sure that we have the same intensity that we did today, the same motivation, the same aggression, and just help each other out.

"That's what we must do every game. It's difficult to win every game but we had too many games that when the game was over we looked back and thought we could have done better.

"That's wrong, when you have regrets after a game. You can lose a game but at the end you must know you did everything to win it.

"We can do it, but we don't always do it and that's the difficult thing in the team this season.

"We have to perform [over] a longer [period] but we work on it and today is a good example for how we have to play over the rest of the season."

Wijnaldum was one of the key men for the hosts as Spurs were swatted aside, with his threaded assist for the opening goal providing deserved reward for a performance full of endeavour over 90 minutes.

Reflecting on his efforts, the Dutchman said: "[I'm] really satisfied. Before the game I was like, I'm just going to play the game and enjoy it, and that's what I did in the game.

"I try to enjoy every game that I play, especially the big games like Tottenham.

"I was ready a few days ago and it was a good performance and I'm really satisfied that it ended up this way."